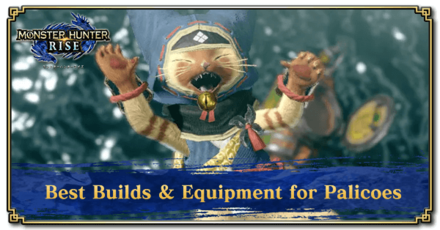 This is a guide to the skills and equipment to equip for your Palico in Monster Hunter Rise (MH Rise). Learn what equipment is best to use, with best builds for the low rank, high rank, and endgame. 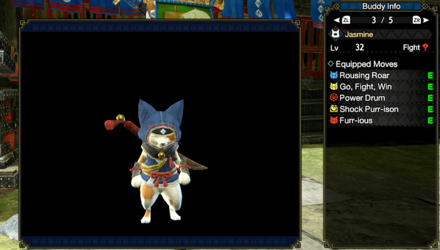 In endgame you will encounter much powerful monsters so having Power Drum and/or Go, Fight, Win in Equipped Skills will help significantly in hunts.

Power Drum boosts both Palico's and Hunter's offense and defense. While Go, Fight, Win reduces hunter's stamina loss while Palico is dancing. These are endgame Palico must haves as it provides free buffs for you and your Palico during hunts.

Fleet-foot Feat is also a great Palico skill especially for gunners or ranged weapon users. When activated, this skill gets the attention of the Monster giving you an opportunity to deal more damage.

The Palico types suggested above are just mere recommendations and are not absolute. If you can find those skills mentioned on other types of Palico then go for it!

We will still utilitze the 5 skill memory slots to buff our Palico's Health and Abnormal Attacks. This is especially helpful if you chose F Genie Breath as your Palico's weapon and for Assist Type Palicoes with Poison Purr-ison equipped.

At this point, you should be more experienced and have a plethora of healing items and strong damage. Switching to an Assist Palico will allow you to make the most of your higher equipment by giving you openings to attack your opponent.

This build assumes that you have a Level 10 Palico by now with four skill memory slots.

More health is always good to have for Palicos as they're more support based, so having them stay alive means that they're constantly supporting you.

By now your Palico should be level 20 upwards, and Poison Purr-ison is a much more useful move compared to Health Horn, so stick to Assist Type when you shift into them mid-game.

This build is for Level 25 Palicos with five skill memory slots.

Here, we trade the rest of the health and defense for Status Attack Up, which is most useful if you use Jelly Shade S, as it increases the chances of monsters getting paralyzed. While it's more effective with Palamutes, having Palicos have this skill doesn't hurt as well. 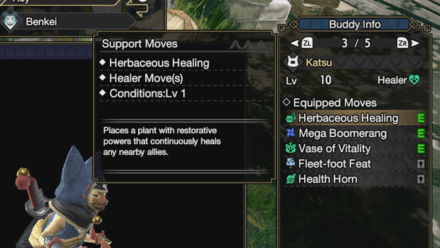 For the early game, while you're still getting your bearings, the Healer Palico is the best type to go with.

If you run out of healing items or are suddenly inflicted with a status ailment, you'll want to have a Palico with Vase of Vitality to remove the status effect and an Herbaceous Healing or Health Horn. These skills are especially useful when you have not farmed for healing items yet.

At this point, you should have only three skill memory slots, and this build assumes you've gotten to at least Level 5 with your Palico

These are the best three skills that you can get with a Level 5 Palico. These skills aren't that important and it's better to get a Palico that will meet your skill builds for later on.

In order for us to make the best articles possible, share your corrections, opinions, and thoughts about 「Builds and Best Equipment for Palicoes | Monster Hunter Rise | MHR (MH Rise)」 with us!