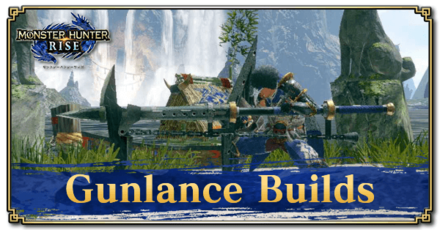 This is a guide to the best builds and equipment for Gunlances in Monster Hunter Rise (MH Rise) for the Nintendo Switch. Learn about the best Gunlances for Update 3.0, and the best Skills and Armor pieces to use with the Gunlances for Low Rank, High Rank, and endgame.

Ortlinde secures its throne in the current endgame as the best Normal Shelling Gunlance. This Gunlance's lance damage edges out its toughest competitor, Araknalance, once you improve its sharpness bar with Handicraft.

Built around Ortlinde. White sharpness is achieved via Handicraft and managed through Razor Sharp, ensuring that your Gunlance damage while Burst Firing is optimal against any monster — Apex or otherwise.

Shelling damage is improved through Artillery and Guard while survivability is bolstered through Guard and Evade Extender.

Revolving around the Howlitzer and Doombringer Gunlance, this build maximizes shell damage through Artillery and Partbreaker. Razor Sharp is once again added to help manage the Gunlance's rapid sharpness loss when shelling — Especially useful for poke-shelling.

Defensive capabilities are greatly improved through Guard and Guard Up, allowing you to stand your ground against any monster as you bombard it with shells!

Ortlinde's great stats and high shelling level ensure a nice and steady climb from HR 8 to 40.

Similar to Ortlinde, Howlitzer is a perfect long-shelled choice for climbing to the endgame with its great stats.

While the weapon itself has inferior ramp up skills, it is possible to rollback to Canyne Cannon II and activate its Wyrmstake Boost ramp up skill instead before upgrading back to Howlitzer!

Mighty Cornpopper maintains its spot at the top of Wide Gunlances by virtue of being the only Gunlance with level 5 wide shelling until HR 40.

Similar to Howlitzer, this particular Gunlance's ramp up skills aren't that great. Feel free to rollback to Cornpopper II to acquire its Wyrmstake Boost ramp up skill, then upgrade back to Mighty Cornpopper.

Made for a comfortable and efficient climb to HR 40, this build covers all of the Gunlance's needs regardless of shelling type. Shell damage and capacity are improved through Artillery and Load Shells respectively.

As for the Lance itself, Razor Sharp helps you maintain sharpness while Offensive Guard increases your attack whenever it is active.

Lastly, defensive capabilities are greatly improved through Guard, Guard Up, and Evade Extender.

Those who prefer Normal Shelling may opt for Ortlinde. This particular Gunlance has Normal 5 shelling and boasts high attack, allowing you to reach the end of Hub 7★ Quests with ease.

It is important to note that you can bring Canyne Cannon II's Wyrmstake Boost ramp up skill over to Howlitzer!

Mighty Cornpopper is, currently, the final weapon along the Guild Tree. This particular Gunlance earns its title as the best Wide Gunlance because it is the only one that reaches level 5 wide shelling until HR 40.

Just like the Howlitzer, you can bring the Wyrmstake Boost ramp up skill over to Mighty Cornpopper by activating the skill from the previous Gunlance along the Guild tree, Cornpopper II.

No Artillery skills but Evade Extender and Guard makes this build pretty easy to use. You also get a bonus ammo capacity from Load Shells which is great for Burst Fire. Works best with Normal Type Shelling Gunlances.

Imperial Guardlance offers great stats across the board for relatively cheap materials, making it the best normal-shelled starter for your high rank adventures!

Cornpopper I is the best wide-shelled Gunlance at this stage of the game due to its high attack, generous green sharpness bar, and shelling level.

This is a straightforward build that covers all of the Gunlance's needs as you begin your climb in High Rank!

Those who prefer Wide Shelling may go for Cornpopper I. This particular Gunlance has great stats across the board and a high shelling level.

This build increases your shell's damage through the use of the Artillery skill while bolstering block prowess with 3 points in Guard.

Eizenlitter hosts great stats for the early game and is very cheap to craft, making it the best weapon to start your journey into Monster Hunter Rise!

Those who prefer a bit more range with their shelling may go for the Barroth Loader I instead. While this particular Gunlance falls short in the sharpness department, its Long Shelling Type allows you to unload shells at a farther distance than Normal or Wide shells would.

Register as a member and get all the information you want. (It's free!)
Login
Opinions about an article or post go here.
Opinions about an article or post
We at Game8 thank you for your support.
In order for us to make the best articles possible, share your corrections, opinions, and thoughts about "Gunlance Builds and Best Equipment | Monster Hunter Rise" with us!
When reporting a problem, please be as specific as possible in providing details such as what conditions the problem occurred under and what kind of effects it had.