A new Livestream with info for Update 2.0 has been announced!
☆ April 27th Digital Event 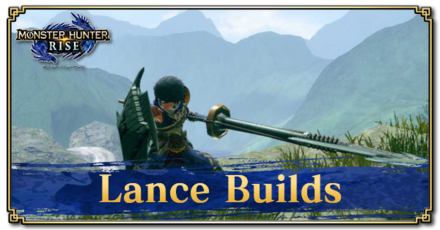 This is a guide to the best builds and equipment for Lance in Monster Hunter Rise (MH Rise) for the Nintendo Switch. Learn about the best Lance, and the best Skills and Armor pieces to use with the Lance for Low Rank, High Rank, and endgame.


This is a developing guide for Best Lance Builds & Equipment. If you have any suggestions or additional information, please comment them below!

Night Rain Black's great attack rating, sharpness bar, and affinity rating make it a solid choice for any hunt. These factors make it the best all-purpose Lance in the game right now!

Defense and mobility are greatly improved through maxed Guard and Evade Extender while DPS is enhanced via Offensive Guard and Critical Eye. Lv. 1 Mind’s Eye is included to prevent regular thrusts from bouncing off hard monster parts.

Set leaves you with 2 free lv. 1 jewel slots after equipping all listed decorations.

The Shield Slugger build focuses on using the Slugger skill to maximize the blunt damage that the lance can use from the Guard Dashes and the Shield Charge Switch skill.

Nargacuga's Night Rains Black boasts great stats across the board, most notable are its high 35% affinity rating and white sharpness bar. It is also relatively easier to craft than the other Lance on this list.

Those fortunate enough to get Magnamalo's Purple Magna Orb can consider getting the Sinister Shadespear. This particular spear competes with Night Rain's Black in terms of damage with the added benefit of Blast Element.

These factors make it a great all-purpose weapon that can take you all the way to the end of 7★ Hub Quests.

Looking for the best elemental lances on the late stages of High Rank? Look no further than our list below.

A set that embraces the sharpness loss of extended fights by utilizing Mind's Eye and Bludgeoner. Offensive Guard greatly amplifies your damage output when used. Ignore your plumetting sharpness level and keep on striking!

Sinister Spear II boasts solid damage and sharpness at the start of High Rank, making it the best starter Lance at this stage of the game.

Rampart boasts incredibly good stats across the board for relatively cheap materials! This particular Lance can take you all the way to the Endgame!

These are the lances that takes the top spot for the early stages of the Hub Quest's High rank.

A simple build that prioritizes affinity. Guard lv1 is also added to help with blocking attacks at the early stages of High Rank.

A comfort build that utilizes max Weakness Exploit to fully use the Lance's ability to poke enemy weakspots. Evade Extender and Speed Sharpening are also equipped for easy repositioning and sharpness restoration if you need to make a quick hop out of the fight.

Paladin Lance I is a Great Mid-Game Starter 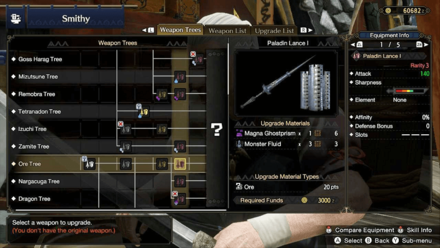 The Paladin Lance I has great stats across the board for relatively cheap materials. Consider going for this particular Lance if you're looking for a great all-purpose weapon to start with.

Sinister Spear I Has Blast Element! 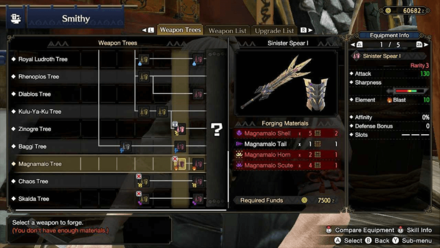 Aside from its obviously good stats, Magnamalo's Sinister Spear I's greatest aspect is its inate Blast Element. This makes it an amazing weapon against most hunts at this stage of the game!

Hidden Stinger I for Affinity Lovers 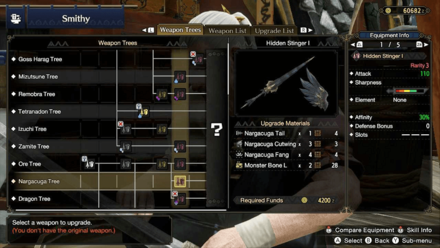 Those who prefer to take their Affinity as high as possible will love the Hidden Stinger I. This particular Lance boasts amazing sharpness and an insane 30% affinity rating. You can take the affinity even further by activating its Affinity Boost I Rampage Skill.

This set is catered to those who want to stand their ground in the middle of the fight!

The Guard skill decreases the stamina cost of blocking by 30% and greatly reduces the impact of blocked attacks at level 4. Offensive Guard, on the other hand, increases attack by 10% at level two after executing a perfect guard.

These skills, when paired with the other offensive skills in this set, provide a great blend of offensive and defense which is perfect for the Lance's playstyle.

This set is for those who prefer to play a rather peculiar style of Lance within the Monster Hunter franchise.

The unsheathed hops drastically improve when using at least two levels of Evade Extender. This grants the Lance an unusual level of mobility.

Pairing this with the other offensive skills in this set also provides a good balance of offense and defense — Just not in the way you would think when talking about a shielded weapon!

If you prefer to max out the Evade Extender skill, consider swapping out the Zinogre Helm with Wroggi Helm instead.

Millennial Lance and The Ore Tree 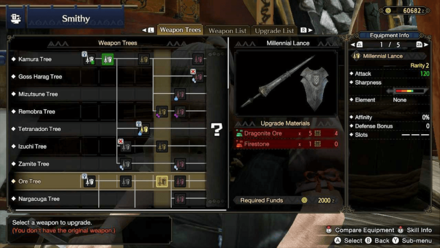 The Lance's Ore Tree are great Lances to start with in the early game.

The Millenial Lance, in particular, offers great solid stats and decent Rampage Skills to choose from. These factors make it a great all-purpose weapon at this stage of the game. 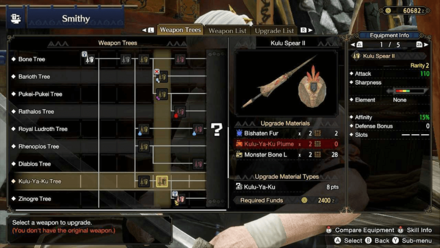 Those who prefer to pump as much affinity as possible may consider going for the Kulu Spear II with its inherent 15% affinity rating. You can increase this further by activating the Affinity Boost II Rampage Skill.

This is the list of the best starter elemental lances to use for the early game.

This armor combination provides a balance between offense and defense.

Register as a member and get all the information you want. (It's free!)
Login
Opinions about an article or post go here.
Opinions about an article or post
We at Game8 thank you for your support.
In order for us to make the best articles possible, share your corrections, opinions, and thoughts about "Lance Builds and Best Equipment | Monster Hunter Rise" with us!
When reporting a problem, please be as specific as possible in providing details such as what conditions the problem occurred under and what kind of effects it had.