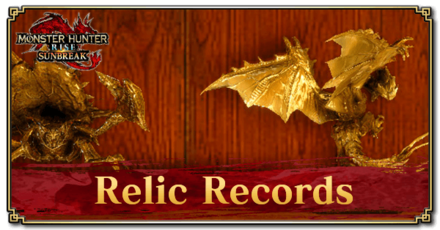 This is a developing guide to finding all the Relic Records and Old Messages in Monster Hunter Rise (MH Rise): Sunbreak. Here you'll find guides on how to get to each Notebook entry in the Jungle and the Citadel maps, and rewards for collecting them all and completing the Hunter Notes!

From the Main Camp, you have to head left until you see a tunnel to your right. Head inside that tunnel and slide down until you reach a small underground pool. The Relic Record will be in the middle, you can't miss it!

2: Inside Hollow Tree Stump in Area 7

From the Main Camp, head for the highest ground in Area 7. When you reach the top, look for a hollowed-out tree with two Godbugs in it. It will also be right beside one of the Buddy Recon areas in the Jungle, which, if you haven't found yet, is marked with floating dandelions.

From the previous Relic Record, head north until you see massive branches that you can climb on. In the middle of two of these branches is a rock that is held up by a bunch of vines. A Relic Record will be sitting on top of it, beside a Might Seed plant.

4: Behind the Collapsed Building in Area 10

For this one, you will need to head to the topmost area of the map where you will see some ruins. Climb the building, go past the hole, and head to the backside of the ruins. You should easily spot the Relic Record there!

This Relic Record is located inside a hole in the wall in the top left side of Area 4. Go north until the end of the beach, turn right, then turn left at the first opening you see, then turn left again past the bonepile.

There will be two other holes on the wall (and they're connected) before the one with the Relic Record. Just remember the Relic Record will be in the third one, and that you will need to wallrun up to it!

6: In the Spiribird Bushes at Area 2

In between Area 2 and Area 10, you can see that there's a tiny portion with a small path that juts out at the top right. This Relic Record is located in that area, on the high ground. When you reach the top, find the bushes that Spiribirds commonly hide in. The Relic Record should be in that bush!

Remember heading to Relic Record 3 from Relic Record 2? Right before the big, fallen log, there's a bunch of vines on the left. Fall down to the area below, but be careful not to fall down the big hole in the middle.

On the wall beside the Escuregot, there's a hole that you can Wirebug and wallrun up to. The Relic Record will be right there as you climb the platform.

8: Inside a Hole in Another Hole in Between Areas 3 and 8

When you drop down, you should be able to see a fishing spot. Face the cliff you fell from; you should spot a hole in the wall. The Relic Record is in there!

You will need your best Wirebug skills to be able to climb the big tree! It might be a bit difficult if you're not good at using your Wirebugs for platforming. Use the mushroom platforms to your advantage!

For more information on how to head to the secret island, check out our guide on the Jungle map page!
Jungle Map Secret Island

From the Main Camp, go out into Area 1 and follow the river on the right that leads to Area 3 until you see a canal on your right. Head inside and run until you see vines that you can climb. While climbing, look for a hole on the wall. Once you see it, go into it and find the other hole in the room to slide down into. It should lead into a small cliff where the Relic Record is located.

2: In Spiribird Bushes on Cliff at Area 4

At Area 4, there's a mountain that has ruined houses on its cliffside. Head up to the peak of the mountain, which is a small platform with a Mining Outcrop. From there, face the ruins in Area 14. Then, you can look down and look for Spiribird bushes on a cliff. There's a Relic Record hidden right there!

Once you arrive at Area 14, climb up the front wall of the ruined building (on the left side). The Relic Record should be at the top. Make sure to manage your stamina!

4: In Cave Covered By Red Planks in Between Areas 2 and 4

Go to the river area in between Areas 2 and 4. There will be a small cave there, with its entrance covered by red planks. You can open these up with Barrel Bombs. Head inside and claim the Relic Record!

5: On an Isolated Ice Cliff North of Area 5

Go straight north from Area 2, then climb up the first cliff to the right. Climb up the vines and go straight north until you see a large cliff ahead on the right with Jewel Lilies at the top. Take the Great Wirebug up, then from the top, wirebug across the gap to the isolated icy cliff. The Relic Record will be at the very edge of the cliff.

6: In a Gap in the Ruined Castle

On the path east of Area 8, climb down the cliff to the south to find a towering mountain of rock, broken bricks and bridges. Climb up from the small hill with a ledge at the end and wirebug up. From the platform, jump off and wirebug into the alcove to find the Relic Record.

7: In an Underground Maze

Go to the high plateau southwest of Area 5 to find a hole into the ground leading to an underground maze. Go through the cave to the west and slide down until you reach the Crystal Chunk. Go left and at the Bonepile, slide down the door to the right, then again at the next door. At the Stately Storage Box, look up to find a cliff you can climb up to, and there you'll find the Relic Record.

Go to the high plateau below the number 12 of Area 12 as shown on the minimap. Find the tower here and climb to the top; you'll find an easy Relic Record.

Go northwest of Area 13 to find a small mineshaft you can enter. Halfway through, you'll find a ledge you can Wirebug up to, where you'll find the Relic Record.

Travel to Sub-Camp 1. If you look at your map, you will notice that there's a tunnel in your Sub-Camp! The Relic Record is right the end of this tunnel, surrounded by 3 Spiribirds. If you haven't found Sub-Camp 1 yet, we have a guide on our Citadel map page!

What are Relic Records?

Collectables Found in Each Area 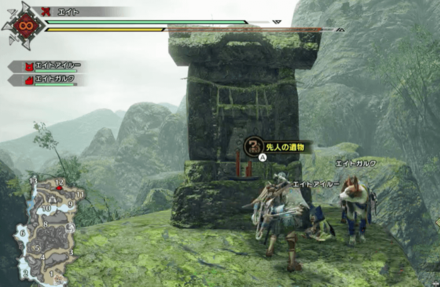 Relic Records are collectibles scattered around each field area. There are 10 on each map, hidden out of sight in sometimes difficult to reach areas. You will also receive 1000 points for each one you find.

Can Be Viewed in the Notebook Later 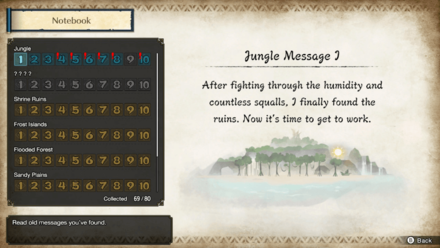 The Relic Records and Old Messages you pick up can be accessed from the Notebook in Hunter's Note menu. These collectibles give an insight into the story and lore of the world of Monster Hunter Rise, so if you have any interest be sure to collect them all!

If you're struggling to find a specific Relic Record, be sure to give this article a look so you can get going in the right direction.

Show Your Notebook to Oboro For Rewards 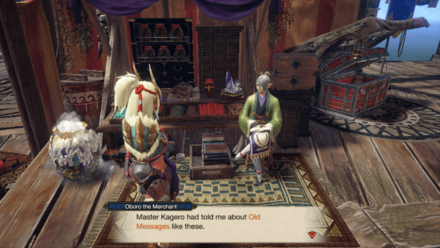 Once you've found all 10 Relic Records for one area, you can show them to Oboro back in the Elgado Outpost to receive gold statues of monsters found in the area. You will receive two statues for each area.

Decorations For Your Room 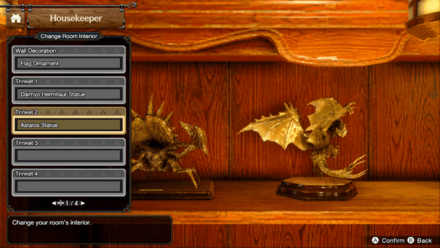 The golden statues can then be put up on a shelf back in Your Room for you to view at your leisure.

In order for us to make the best articles possible, share your corrections, opinions, and thoughts about 「How to Find Sunbreak Relic Records | Monster Hunter Rise: Sunbreak」 with us!