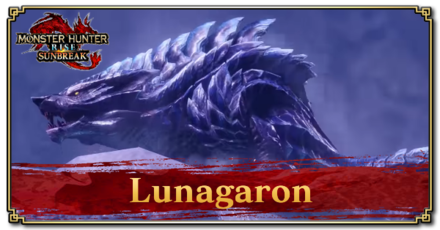 This is a hunting guide for Lunagaron, a Large Monster in Monster Hunter Rise (MH Rise) and the Sunbreak DLC. Read on to learn Lunagaron's weaknesses, forgeable weapons, forgeable armor, drops, and attack patterns for Master Rank! 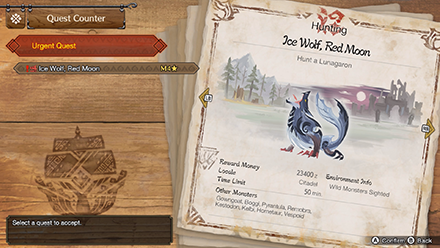 Lunagaron is the target of the Urgent Quest that unlocks MR 4. You can get the quest by finishing three M★3 Key Quests after completing Keep it Busy. 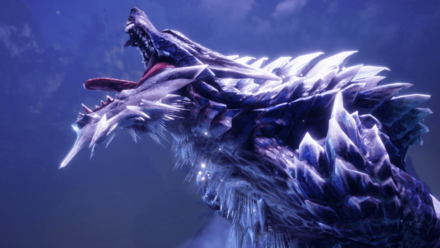 Lunagaron have different attacks depending on their stance. They also use ice attacks, so raising your ice resistance should give you an edge. Lunagaron are extremely agile when on all fours so try not to lose track of them. When covered in ice, a continuous assault will not only result in shattering the covering but will also tople the beast. Mind your positioning when powerful attacks are incoming.

Most of Lunagaron's attack deal Iceblight especially when it's in bipedal Werewolf mode. Iceblight is an annoying blight to have as it slows down Wirebug gauge regeneration, limiting your access to your precious Silkbind Attacks and Wirebug moves.

The easiest solution is to bring Nulberries and take one everytime you're blighted. Nulberries can be easily gathered in the map or traded in the Argosy. You can also increase your Ice resistance to have increased suvivability.

Lunagaron likes to attack forward on a straight line so avoid attacking this monster head on. Always try hanging on to its side to keep yourself safe.

As mentioned above, Lunagaron likes to attack forward in a straight line hence the most effective way to avoid the attacks is to evade sideways. Make this a habit and you'll be safe most of the time.

Be Aware of its Different Modes

Lunagaron enters three modes during the fight, mostly differing on how much Ice covers its body. It gains access to Iceblight attacks as soon as Ice Armor mode, but gets more aggressive in Werewolf mode.

Take Note of Attack Changes When On Werewolf Mode

When Lunagaron becomes angry enough to enter Werewolf Mode, it gains access to a plethora of new attacks that focuses more on dealing damage using its frost covered claws. Do not underestimate the moves because it packs a punch!

Aim for the Icy Parts for Huge Damage

While in both Ice Armor and Werewolf mode, attacking the ice armor that forms around Lunagaron will deal increased damage. What's more, hitting these enough will break it and topple Lunagaron, opening it up for follow up attacks!

The parts in question include its face, back, tail, and all its limbs.

Lunagaron is capable of producing icy mist from its body to freeze its foes. It can use this ability to attack from far away or as a means to damage hunters near it.

Taking inspiration from werewolves, Lunagaron is capable of standing up with its hind legs, assuming a bipedal stance. This allows it to use more moves!

In order for us to make the best articles possible, share your corrections, opinions, and thoughts about 「Sunbreak Lunagaron: Weakness and Drops | Monster Hunter Rise」 with us!