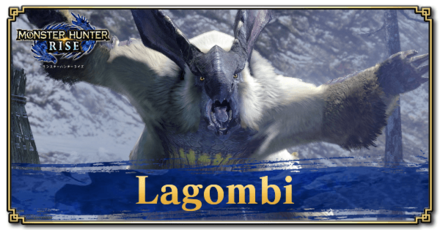 This is a hunting guide for Lagombi, a Large Monster in Monster Hunter Rise (MH Rise) and the Sunbreak DLC. Read on to learn Lagombi's weaknesses, forgeable weapons and armor, drops, and attack patterns for Master Rank!

How to Unlock Lagombi 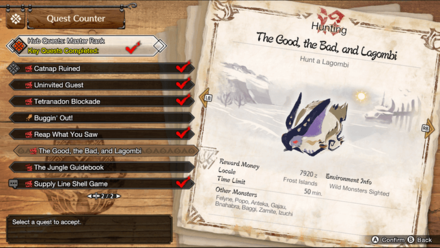 Master Rank Lagombi is unlocked in the M★1 quest list after finishing Tetranadon Blockade in the Sunbreak expansion. 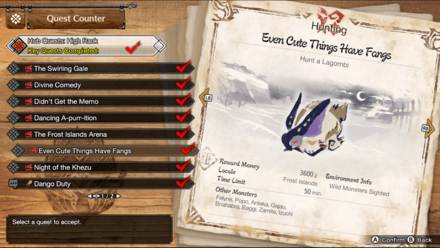 Available from the Start in Low Rank 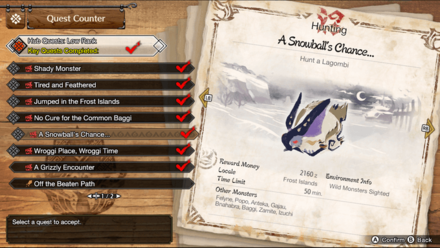 Low Rank Lagombi can be hunted right at the start and will appear in the base list of ★1 Low Rank Hub Quests. 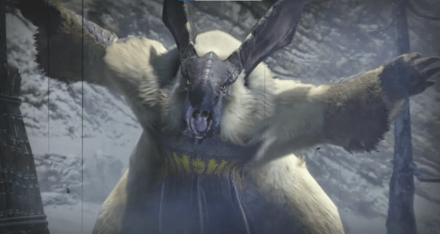 A Lagombi has very sensitive hearing, and Sonic Bombs will cause it to flinch in pain. Time a well-aimed throw for when it's sliding around, and you may topple it. When enraged, however, Sonic Bombs have no effect on it.

How to Beat Lagombi

Focus on the Head and Hind Legs

Lagombi's belly is surprisingly tough and can deflect attacks. Focus your attacks on its head and hind legs instead!

Lagombi's Slide Attacks can disorient and may even cart hunters during the fight — Especially when enraged.

Keep an eye out for when Lagombi gets on all four legs. This telegraphs that it is preparing for one or multiple Sliding Attacks. Consider stopping the offensive first and focus on avoiding during this time.

While it can be difficult to time, Sonic Bombs can send Lagombi crashing from its Sliding attack! It is important to note that this particular tactic does not work when Lagombi is enraged.

Lagombi's Jump Attack is its strongest attack. In light of this, it is paramount that you keep an eye out for this particular attack at all times during the hunt.

Track Lagombi's shadow while it is airborne. This gives you an indicator as to where it'll land, giving you more than enough time to dodge out of harm's way. Shielded weapons such as the Charge Blade and Lance can take advantage of this slow but powerful attack by parrying it their respective Silkbind Attacks.

Use Nulberries When Hit by Snowball

Getting hit by the Lagombi with its snowball attack will leave you with Iceblight which slows your wirebug gauge recovery. You still have movement when Iceblighted though limited, which is why you should use Nulberries to rid of status effects.

In addition to its attacks in Low and High Rank quests, Lagombi uses the following attacks in Master Rank.

It is an attack where Lagombi slides on its belly and attacks you, often in multiple succession. Whenever it is sliding around, it will be quick and tough to hit so focus on dodging this move instead.

As mentioned before, Lagombi also attacks with snowballs. The snowballs have a surprisingly wide range, do a lot of damage, and also deals Iceblight, so watch out!

Lagombi will stand at a bipedal position and claw at its target, attempting to swipe at it.

In order for us to make the best articles possible, share your corrections, opinions, and thoughts about 「Sunbreak Lagombi: Weakness and Drops | Monster Hunter Rise」 with us!