★ Sunbreak is out now! Learn How to Download the DLC!
★ Everything You Need To Know About Sunbreak
┗ Tips to Get Started
┗ New Silkbind Attacks and Switch Skills
┗ New Monsters | Weapon Changes
┗ Sub-Camp Locations | Relic Records 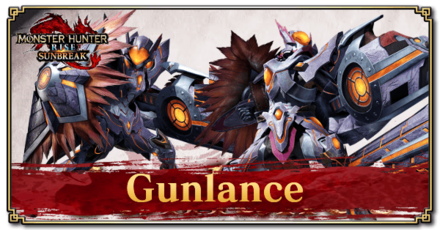 This is a guide to the Gunlance, a weapon in Monster Hunter Rise: Sunbreak (MH Rise). Read on to learn about new Gunlance controls and combos, how to use Gunlance shelling, Gunlance's Blast Dash as well as details on Gunlance Switch Skills.

Gunlance was fun to use in MHRise so it's great that it got really great buffs across the board, mostly to keep up with the damage needed to dispose of MR monsters! What more, the cooldown for the Wyvern Fire and Wirebug cooldown after using Hail Cutter were shortened - making these already staple moves an even greater pick.

Gunlance is very comfortable to use in Sunbreak!

The hunter uses a Wirebug to close in on the monster, then it unleashes everything loaded in the Gunlance! Note that a full reload will be done first if any of the ammunition (including Wyvern's Fire cooldown) is not ready before performing the attack, so time it properly!

The reload and blast dash also cannot be stopped by roars or enemy attacks.

This Switch Skill fires an exploding stake at the target. The Gunlance heats up after the explosion, indicated by a blue flame, and enhances all slashing attacks for a limited time. This will likely switch with the Wyrmstake Cannon.

How Good is the Gunlance?

The Gunlance is a weapon that can easily deal damage. However, since there's a big windup time for its attacks, it needs knowledge of a monster's moves so it doesn't get interrupted. The Gunlance is also slow, making it difficult to move around the battlefield. 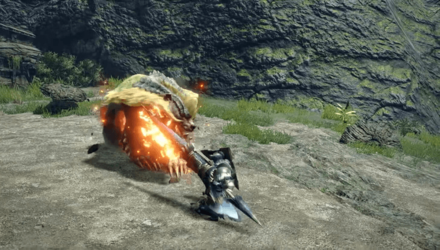 Shelling attacks ignore monster armor so Gunlance players revolve their playstyle around it. This is mostly where the Gunlance shows its full potential!

Though shelling is where the power lies, Gunlance's physical attacks are not too shabby either! Depending on the situation, you can build your Gunlance for poking only!

Like the Lance, the Gunlance also has a long reach and can aim high. This enables the hunter to reach the high heads of Anjanath or hit flying enemies like Rathalos!

The Gunlance is also top tier when it comes to guarding! It is possible to bombard enemies with shelling while guarding to keep this in mind! 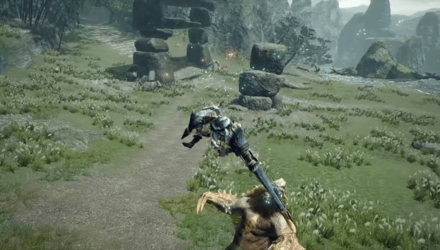 Unfortunately, shelling rapidly consumes sharpness. Remember to use Guard Edge or sharpen during the fight! We suggest putting in the skills Razor Sharp or Protective Polish to slow down sharpness degradation. If not, just opt with Speed Sharpening so you can sharpen in less time.

When unsheathed, the Gunlance reduces the hunter to a crawl. Sheath your weapon or build your Gunlance for Evade Extend to reposition effectively! Blast Dash can be used to mitigate this but you will not have access to Charged Shelling anymore.

In addition to managing sharpness, Gunlance users must also manage the Gunlance's Wyvern's Fire and Shelling ammo. This requires a steady presence of mind whenever you play!

The new Bullet Barrage Silkbind Attack can be used in the Sunbreak demo and replaces either Hail Cutter or Ground Splitter.

The hunter uses a Wirebug and the Gunlance to launch themselves forward and sets off an explosion that unloads everything the Gunlance has loaded. The reload and blast dash also cannot be stopped by roars or enemy attacks.

A fully loaded Gunlance will perform the action quickly. Note that shells, Wyrmstake Cannon, and Wyvern's Fire will be reloaded first before the move is executed if any of them are not fully loaded or ready. When using Bullet Barrage, make sure that you are in a safe position before using it as it has a relatively long windup time.

This move costs two Wirebug charges and has a medium recovery speed.

Hail Cutter is a Silkbind Attack that launches the hunter airborne while reloading the Gunlance. The move finishes with a downward slam where you may opt to use Burst Fire or Wyvern Fire with a shortened charge time!

Guard Edge is a Silkbind Attack that acts like a counter-guard but restores sharpness. Considering how Gunlance shelling eats up sharpness at a rapid rate, this is a great addition to Gunlance's arsenal!

Ground Splitter is a Switch Skill switchable with Hail Cutter. The hunter will drag the Gunlance on the ground while moving forward and strike with an upward slash. It also temporarily boosts the damage for shells, Wyrmstake Shots, and Wyvern's Fire.

Blast Dash propels your hunter using the force of the Gunlance artillery. It does not have any damaging potential but is useful for closing out the distance between you and the monster. Blast Dash can be used up to three times.

Ground Splitter drags your Gunlance on the ground, heating the tip while increasing the damage of shelling and Wyvern's Fire for a short time. Change into this Switch Skill as soon as you unlock it!

In Guard Reload, your artillery rounds are reduced to 3 but reloading is now guarded. This will also reload your Wyrmstake Cannon.

Replaces the consistent tick damage of Wyrmstake Cannon with a huge, single burst damage attack. Useful for breaking parts of the monster since it's a big, single point damage.

Charged Selling is an old Gunlance attack that allows you to increase a shell's damage by charging your shots. It's extremely effective for long-type Gunlance ammo due to its inherently high damage output.

Unlike the Unload Burst, charged shelling only consumes 1 ammo at the cost of dealing less damage.

While charging, the direction of the Gunlance's shot can be changed by moving the joystick up or down or with W or S. Charged Shelling can be shot forward, at a 45° angle, or directly above the user.

The Wyrmstake Cannon uses a large metallic stake or harpoon-like ammo which deals a massive amount of damage when fired. Accompanied by this cannon are two attacks which in turn makes the combo a devastating blow to any enemy monster.

There are multiple ways to achieve this combo so practice what feels comfortable the most to you.

Reload them using Normal Reload or Guard Reload, Quick Reload will not reload the Wyrmstake Cannon.

The Gunlance is charged and unleashes an explosive shot after a few seconds. You can adjust the Gunlance's aim while winding up the attack.

Wyvern Fire will force you to stay in place until the weapon is fired and also has a long cooldown, so it is better to use this move when the monster is down.

While the Wyvern Fire isn't a new move to the Gunlance, it has received a new feature wherein it can guard the user against attacks while the Gunlance is charging the move.

The Burst Fire is a returning move in Monster Hunter Rise! Burst Fire is a move that quickly fires all the current shells you have and is a great move to use for Gunlances with normal ammo types due to its massive amount of ammunition.

Recommended Combos for the Gunlance

This combo utilizes all of the high damage moves of the Gunlance but leaves you open to counterattacks. Only use this combo when the monster is down.

With this combo, you can start prepping the Wyrmstake Cannon when the monster roars as that is your opening. Quickly transferring into guard edge can help block against the attack after the roar which then leaves the monster open for you to blast them with your readied Wyrmstake Cannon.

This combo allows you to enter into a Guard Edge and then transfer into a Burst Fire. You can also integrate movements for repositioning yourself while slamming down attacks.

A full combo that bombards the target with endless Burst Fires using Ammo Up and Reload Speed and goes well with Normal Shelling Gunlances.

This combo enables your Wyrmstake Cannon to execute faster if shot from Charged Shelling. Combine this with the Switch Skill Guard Reload and you will have an infinite combo.

Tips on How to Use the Gunlance

Deal a Lot of Damage With Wyvern Fire! 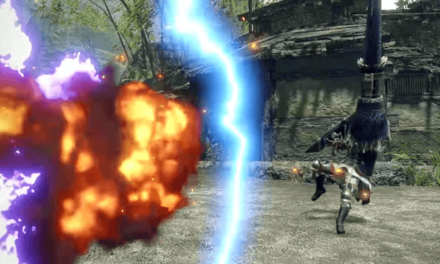 Wyvern Fire is the most powerful attack the Gunlance can deliver. Make sure it hits the monster so it would not be wasted! 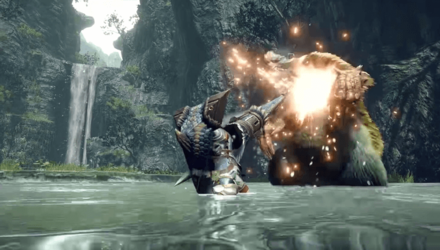 Shelling bypasses monster armor so you may bombard any part of the body regardless of the toughness!

Use Guard Edge to Recover Sharpness 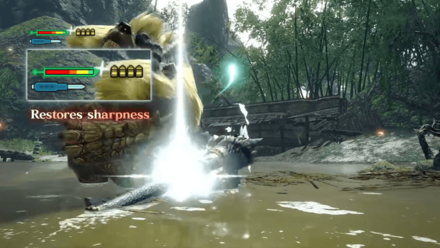 Guard Edge is a great addition to Gunlance's arsenal. This is very useful considering that shelling rapidly decreases Gunlance sharpness! You may also use armor skills like Handicraft or Speed Sharpening to mitigate the rapid sharpness decrease.

The Wyrmstake Cannon is Gunlance's main DPS improving skill. It almost doubles your damage so always make sure that the monster has a Wyrmstake cannon in it and keep firing on it with shells!

Don't Hesitate To Use Traps

Traps are a valuable item in Monster Hunter games. It allows you to ensnare a monster and potentially capture it when its HP is low. With Gunlance's bursty nature, a single opening can prove fatal to monsters, and using traps is a surefire way to get that opening.

List of All Traps and Bombs | Monster Hunter Rise

The Gunlance's playstyle, while fixed into the DPS tank role, will vary greatly depending on their weapon's shelling type.

Master the Three Types of Reload

It is important to know when to use these types of reloading. Wyrmstake Cannon is very powerful but it is cumbersome to reload. A great Gunlance player knows if the situation calls for Reload or Quick Reload.

The Switch Skill Guard Reload is the middle ground but you don't unlock it until the Hub ★6 so it's a long way to go. By that time, you should have mastered both Reload and Quick Reload.

Be careful when using the Wyvern Fire if your teammates are nearby. The explosion can flinch them and will disrupt their combo. Maintain proper decorum and use Wyvern Fire only when there isn't an ally nearby or let them know if you will use it so they can back off.

There are a couple of bugs related to the Gunlance that Update 3.5 that are now fixed!

Wyvern Fire Cooldown is Shown Under the Wyrmstake Cannon Icon

The cooldown for the Wyvern Fire is now displayed with an orange meter below the Wyrmstake Cannon icon. You can now see (at a glance) if Wyvern Fire is ready!

See more comments (4 Comments)
Opinions about an article or post go here.
Opinions about an article or post
We at Game8 thank you for your support.
In order for us to make the best articles possible, share your corrections, opinions, and thoughts about "Gunlance Guide: Combos, Controls and Moveset" with us!
When reporting a problem, please be as specific as possible in providing details such as what conditions the problem occurred under and what kind of effects it had.