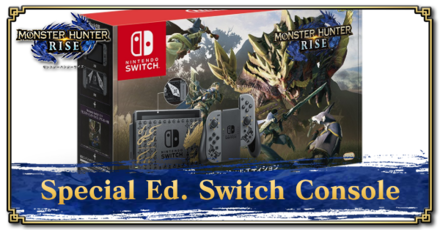 This is an article about the Monster Hunter Rise (MH Rise) Nintendo Switch Bundle released by Nintendo! If you want to know more about what it looks like and which peripherals have special editions then read on!

The US version of the Nintendo Direct on February 17th, 2021 announced the Monster Hunter Rise Deluxe Edition system and Pro Controller which were previously announced for release in Japan and the UK.

This bundle was released in stores on March 26th, 2021. Currently, some shops are all sold out, but there's a possibility that they might restock.

A Special Edition Monster Hunter Rise Nintendo Switch was announced by the Official Nintendo Japan website on January 27, 2021 (JST)! This console will only be available in Japan, US, and UK.

If you are not from any of these regions, do not feel bad. The Nintendo Switch is known to not be region locked so it is possible to buy from Japanese, US, or UK stores!

To know more about other game editions, check out our guide below!

All Game Editions and Bonuses

If you want to know which other controllers are best used for Monster Hunter Rise, check out our guide!

Best Controllers to Use

Both the special edition Nintendo Switch and Pro Controllers were sold last March 26, 2021 (JST) and the preorder reservations will started on February 27, 2021 (JST) in Japan.

Here are the links for the US preorder of the special editon Monster Hunter Rise Switch and Pro Controllers! Currently, the some shops are sold out while some still sell preorders.

Here are the links for the UK preorder of the special editon Monster Hunter Rise Switch and Pro Controllers.

Generally, preorders are done online or in physical stores in Japan but there is no news yet on the stores that will offer preorders for this Special Edition Switch. However, because of the COVID-19 pandemic, there is a chance that this will be online-only.

But if we pattern this release with the previous Monster Hunter special edition releases, you may order these from e-Capcom in Japan. Take note though, special edition consoles usually sell like hotcakes so don't be surprised when the website crashes or pre-orders are sold out.

If you want to find other preorder bonuses for the game, check out this guide!

In order for us to make the best articles possible, share your corrections, opinions, and thoughts about 「Monster Hunter Rise Switch and Pro Controller Bundle | Where to Preorder | MH Rise」 with us!