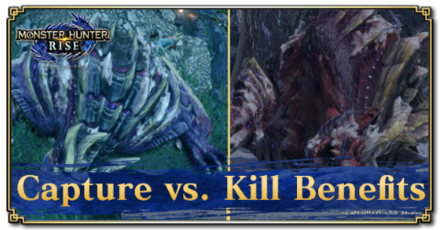 This is a guide on capturing monsters in Monster Hunter Rise (MH Rise). Read on to learn how to capture monsters and take on capture quests, whether to capture or kill, and capture rewards.

How To Capture Monsters

How To Capture Monsters: Step-by-Step

Capturing Monsters allows you to hunt monsters and finish quests without actually slaying them.

If you want to capture monsters, you have to get these tools required for capturing monsters. It is safe to have one of each type of trap in case the monster fails to be lured into your traps but in essence, you only need a minimum of one trap and two Tranq Bombs. 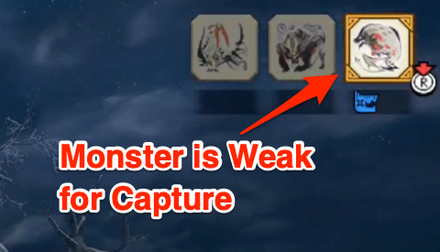 It is also possible to capture before the blue icon shows up! If you're bringing a Palico out on hunts, it will inform you if the monster is weak and ready for capture! You will see this as a text prompt on the right side of the screen.

Set Trap and Use Tranq Bombs

If a monster is primed for capture, set a trap (either a Shock Trap or a Pitfall Trap) underneath the monster. Once it is caught, quickly use two (2) Tranq Bombs near the monster to effectively capture it!

Also, it does not matter if you hit to use the Tranq Bomb first or set the trap first - the monster will still be captured as long as the entirety of the process is completed.

Elder Dragons and Apex monsters are not capturable in any way because traps are ineffective, and will only have slay quests.

Capture Quests and Other Quest Types

Condition for Clearing Some Quests

Most quests in Monster Hunter Rise (MH Rise) are Hunting Quests but some are also Capture Quests. Check the type of quest at all times because if you accidentally kill a monster during a capture quest, the quest will fail.

Similar to Wyvern Riding, there is also a training quest that focuses on capturing monsters. If you are still not sure about how to capture monsters, we suggest doing The Basics of Capturing Monsters first as it has lesser penalties when you capture incorrectly.

Since hunters only need to weaken their target, capturing monsters is faster than slaying in both hunt completion time as well as time spent in the quest completion menu.

Get Rare Drops from Capture Rewards 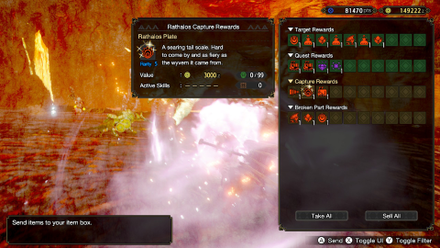 By capturing monsters, you get capture rewards instead of carve rewards. If you're looking for rare drops, they are more likely to drop from captures than carves.

We suggest checking the Materials Section of the Hunter's Notes before going in hunts, as some rare materials drop rates vary based on capture or carve.

▲ Easier to get Magnamalo Blade+ by killing and carving than capturing.

Some monster materials are carve exclusive, or have a higher drop chance than in capture rewards so check your Hunter's Notes before every hunt!

By default, normal and Apex monsters grant three carves while Elder Dragons grant four. The number of carves can be further increased with the Carving Master skill.

Since you're aiming for killing the monster, you essentially have a lot more time to break parts and cut tails. When capturing, there is a chance that the monster will weaken before you can break parts and sever the tail so when you really need to break these parts, we suggest killing instead of capturing.

Examples of Materials that are Easier to Get by Carving

The materials above are just examples and we still suggest checking out your Hunter's Notes for the material table. You should balance between capturing and killing depending on the monster part you are aiming for.

Play Solo When You Are Particular With the Hunting Methods

When playing in Multiplayer, you will be paired with a bunch of randoms who may not have the same hunting objective as you. If you need a specific material that is more likely to drop in either capture or slay, we suggest playing solo.

Register as a member and get all the information you want. (It's free!)
Login
Opinions about an article or post go here.
Opinions about an article or post
We at Game8 thank you for your support.
In order for us to make the best articles possible, share your corrections, opinions, and thoughts about "How to Capture Monsters | Capture vs. Kill | Monster Hunter Rise" with us!
When reporting a problem, please be as specific as possible in providing details such as what conditions the problem occurred under and what kind of effects it had.