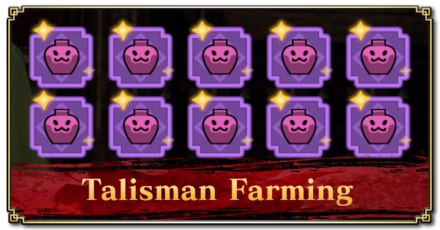 This is a guide on how to farm Talismans in Master Rank and High Rank in Monster Hunter Rise: Sunbreak. Learn how to exploit the Melding Pot to reroll Talismans, and how to farm Melding Items and Materials.

Each of the Quests above will yield a high number of Materials, each with high Melding Pot point yields. They also all share the advantage of being easy to clear after getting used to their patterns.

Diablos is the Go-To for Farming MR and Talismans Together 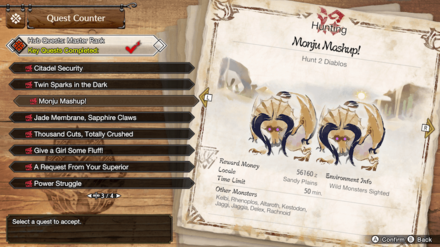 When raising your MR and farming for Materials to use for Talismans at the same time, the MR4 Quest Monju Mashup! is your one stop. Diablos' Materials aren't particularly high in their Melding Pot point yield, but the MR you'll get from one Quest is higher, and when using Piercing Ice Ammo, the Quest can be cleared in a clean three minutes. 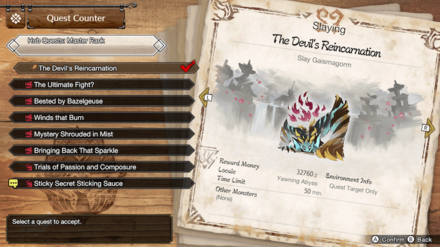 Like Narwa before it, Gaismagorm is one of the most reliable monsters to farm for Materials to use for Talismans. Although the time required for the battle can have some variation depending on player skill, once you are used to the pattern it can be completed in 3-5 minutes on multiplayer or 5-10 minutes on solo.

Based on our calculations for each of Gaismagorm's Material drop rates, players can expect to yield 1300 points with no broken or cut parts, and 1900 points with all parts broken and cut. That's enough to make 6 to 9 Talismans in one go with the Anima method!

Players will typically get 6 Materials from Carves and 8 Materials as rewards after the fight. Gaismagorm also has four breakable parts – Head, Horn, and both Wingarms – as well as a cuttable Tail which can be carved twice, for a total of 20 Materials if all parts are broken and the tail is cut.

We calculated these values by taking the averages of each drop's Melding Pot point values and drop rate, multiplied by the amount of drops from that part. 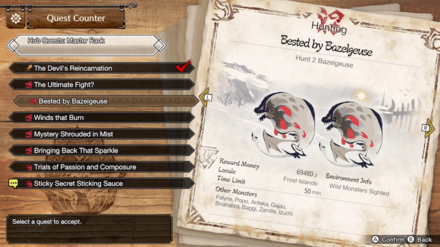 Sunbreak offers the first chance to fight 2 Bazelgeuse in a single Quest. Like in the base game, its parts yield high Melding Pot points and it can be downed with Slicing Ammo or Piercing Thunder Ammo. However, Slicing Ammo has been nerfed by Weapon Changes since the base game, and can't push out the same level of damage it did before, making this route take longer than the Diablos option.

Get Friend Vouchers from Multiplayer 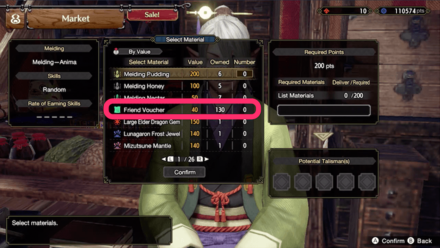 When playing online, you can receive a variety of items as bonuses from Quests. Once of these items are Friend Vouchers, which each earn 40 Melding Pot points, and have no usage outside of the Melding Pot. If you're running Quests to farm Talisman Materials, you're better off going multiplayer to get these as a bonus with as many Quests as possible.

How to Get Friend Vouchers

At the end of each multiplayer hunt, you'll see a column for Friend Points below Kamura Points – when this column fills up, you'll receive a set of items as shown. One of the available sets is a pack of 12 Friend Vouchers.

Friend Points are gained by sending each other likes after the hunt and exchanging Guild Cards. Be sure to do these as much as possible on every hunt to maximize your Friend Points.

How to Farm Friend Vouchers

Use Melding Items to Craft

In the Sunbreak DLC, players can collect Melding Pudding from the Argosy by using Backroom Deals, which can be used in place of Monster Materials and for a high number of points. A single Melding Pudding is enough to produce 1 Talisman.

To get as much Melding Pudding as possible by the time you unlock Master Rank Melding, use the Argosy as you play through Master Rank and keep Backroom Deals on for all three Buddies. Save up your Melding Items and don't spend them until you've unlocked the Anima Method for best results! 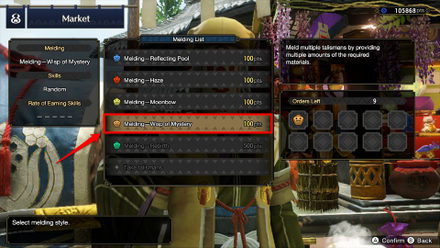 The skills from Anima (Master Rank) and Wisp of Mystery (High Rank) are entirely random, but you have a higher chance of getting better overall Talismans. If you want a specific skill for a build to help you finish the story, you can go with any melding method up to Moonbow, but any serious endgame grinding should use Anima (or Wisp of Mystery for Base Game players).

We go into more detail about the success rates of each melding method in our How to Use the Melding Pot guide!

How to Unlock All Melding Methods

Use Reincarnation / Rebirth for Unwanted Talismans 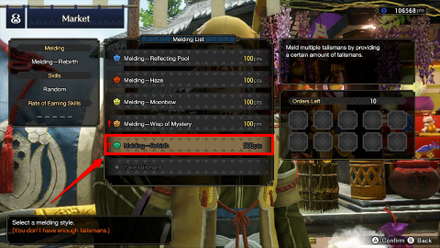 Instead of using Monster Materials or Melding Items, Reincarnation (Master Rank) and Rebirth (High Rank) melds have you recycle 10 (20 for Rebirth) Talismans to get 3 new ones. If you have too many Talismans or you're low on Monster Materials, give Rebirth melding a shot.

Use Aurora for Targeting Talisman Skills 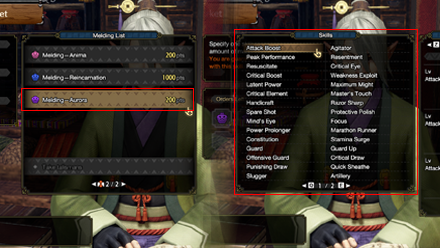 Using the Aurora (Master Rank) melding method ensures that the talismans you create have one (1) secured skill you specify. Use this melding method if you're aiming for a desired combination of skills and stats in a Talisman while having a 100% guaranteed skill of your choice (note that the guaranteed skill's level is still random.) This is a good choice if you already have a planned build in mind and do not want to invest too much time and resources into randomized talismans.

The skills you want to focus on are ones like Weakness Exploit or Critical Boost that are harder to find on armor sets. These skills are incredibly versatile and can be useful in most setups.

Although you're best off waiting for Master Rank to really start grinding Talismans, the MR6 unlock barrier to entry can be daunting for some. Having a good Talisman can help push through Master Rank, so try the methods below if you want to farm some High Rank Talismans.

As of Update 3.0, fighting Thunder Serpent Narwa in the quest Serpent Goddess of Thunder is still the most efficient way to farm for melding materials. Though Narwa materials are not the highest in terms of value, each run can be completed in roughly 5-10 minutes! You can even achieve a sub-5 minute run if you know all her patterns and nuances!

For an informative guide on how to beat Thunder Serpent Narwa, click on the link below:

When Wyvern Riding monsters, an opposing monster can make it drop up to three Shiny Drop Materials by attacking it three times. This is the maximum for every monster so we can use this mechanic to farm materials quickly without having to actually hunt the monster.

Though not as efficient as farming Thunder Serpent Narwa, this method is way easier especially if you cannot finish Narwa's hunt below 10 minutes. We suggest doing this if you want to relax or farm passively while watching a movie or TV show!

Other Non-Apex Rampage Quests Are Good Too

Defender Tickets dropped from Rampage Quests are also great options for melding with their high value and drop rate. Clearing a single quest can get you many of these tickets, so if you find yourself struggling with Narwa, try farming Defender Tickets instead.

Rampage Quests where Apex monsters appear will take more time, so we recommend farming ★6 and up quests with normal monsters only. Each run will take roughly 10-15 minutes with minimal difficulty.

We also suggest reaching an S rank or above to maximize all rewards! To know more on how do so with our guide:
Rampage Guide: How to Get S-Rank 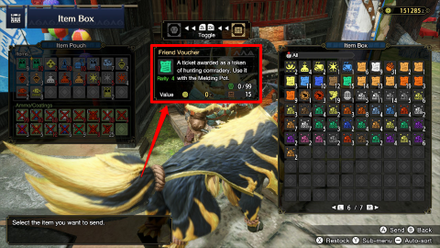 How to Get Friend Vouchers

As you complete your quest online, on the results screen you will see a bar for Friend Points that when accumulated will offer bonus rewards, sometimes resulting in a set of 12 Friend Vouchers.

You and your friends will both receive points, and exchanging Guild Cards will increase the number of points you both receive.

This trick will allow you to reroll any number of Talismans up to 50 as many times as you want, while only spending the Materials and Kamura Points needed for 1 Talisman for each reroll. You can continue to reroll Talismans this way until you find the perfect fit for your build!

Monster Hunter Rise generates lists of Talismans which are hidden to the player each time they craft at the Melding Pot. The lists only reset under certain conditions, so even if the player resets the game and crafts Talismans again, they'll just draw from the same list. If you notice, this is why the Talisman obtained in Step 6 is the same as the first Talisman of the list in Step 3.

It's possible to reset the list by crafting at least one Talisman and restarting the game. This exploit takes advantage of this fact by doing exactly that, and resetting the list repeatedly to check as many possible Talismans as you like!

In order for us to make the best articles possible, share your corrections, opinions, and thoughts about 「Sunbreak Talisman Farming and Best Melding Pot Methods | Monster Hunter Rise」 with us!