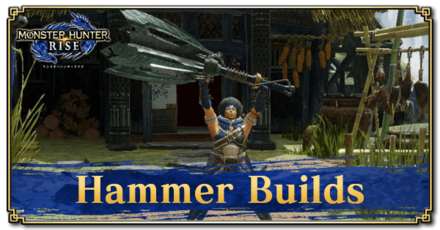 This is a guide to the best builds and equipment for Hammer in Monster Hunter Rise (MH Rise) for the Nintendo Switch. Learn about the best Hammer, and the best Skills and Armor pieces to use with the Hammer for Low Rank, High Rank, and endgame.

These hammers sport the highest raw damage output from all the hammers available at the end of the game. Night Eternal focses on affinity while Sinister Shade Hammer focuses on inflicting blast + raw damage. Both hammers are great options but Night Eternal is the better choice due to it being usable against all monster types.

Improves Hammer DPS by increasing crit damage & affinity. Maxed Slugger is added to improve KO speed during hunts — Also effective on multiplayer scaling. Best used with Night Eternal since it reaches 95% base affinity with it (Reaches 125% affinity when Latent Power is active).

Set has 5 free lv.1 slots after equipping all listed decorations. Can use these slots to include QoL skills such as speed sharpening and elem / status resistances.

Both Hammers are share the top spot at all the way to 7★ Hub Quests. It could be argued, however, that Night Eternal edges out the Sinister Shade Hammer due to its high affinity rating and is relatively easier to craft.

A hammer setup that aims for max affinity with the Nargacuga's Night Eternal hammer and max Weakness Exploit for a flat 90% affinity when hitting the monster's head. Affinity is over 100% with Latent Power which guarantees max damage against monster weakspots and together with Slugger, every head hit you'll land will definitely count.

War Basher is a great Hammer to go for in the early stages of the game due to its great stats across the board.

A simple affinity starter set for Hammers. What it lacks in QoL skills, it makes up for with high affinity and raw damage to end hunts faster.

Sinister Hammer I to Get Things Started 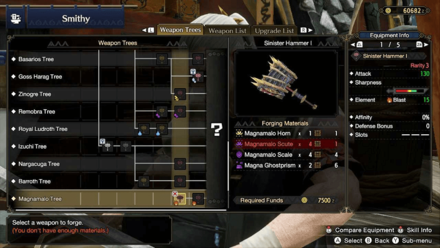 Magnamalo's Sinister Hammer I is a great weapon to use at the start of this stage of the game! Its solid stats paired with Blast Damage makes it an excellent weapon for most hunts in the mid game.

Hidden Breaker I Has High Affinity! 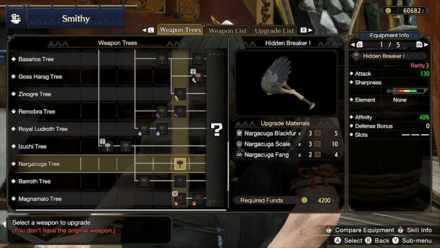 Those who prefer to pump as much affinity as possible will love the Hidden Breaker I. This particular hammer boasts a generous bar of green sharpness and an insane 40% affinity rating. You can take it further by activating its Affinity Boost I Rampage Skill!

Cyclo-Hammer I is a Raw Damage Monster

Cyclo-Hammer I offers one of the highest base attack ratings (160) in the game at this stage of the game. Paired with its generous green sharpness bar, this raw damage monster is great for all hunts and scenarios!

Basarios Blow II Offers Damage With A Bit of Defense 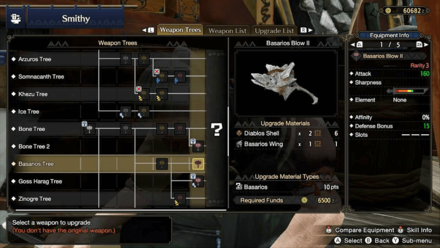 Those who prefer a more defensive approach to the game can consider making Basarios Blow II. This Hammer is on par with the Cyclo-Hammer I in terms of attack rating (160) but only has a thin bar of green sharpness.

Basarios Blow II has a +15 defense rating on the weapon itself. You can further increase the defense bonus by activating the Defense Boost I Rampage Skill.

This set sacrifices a bit of damage for utility. The Slugger skill increases stun power by 40% at level 3, making it the perfect compliment for the Hammer's playstyle!

Those who prefer straight up damage can go for this set instead. Pairing this with Hidden Breaker I will easily net you 100% Affinity when Lv. 2 Latent Power is activated.

War Hammer I is a Great Starter Weapon 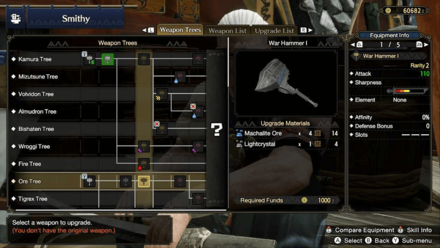 The War Hammer I. much like the other hammers within the Ore Tree, provides great stats for relatively cheap materials. You can start with these hammers early on!

Kulu Bludgeon I For Affinity Lovers 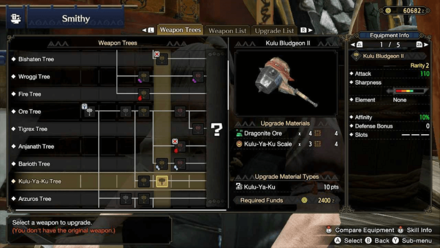 Kulu-Ya-Ku's Kulu Bludgeon I offers a generous bar of green sharpness and 10% affinity rating. Go for this hammer if you prefer to pump as much Affinity as possible into your builds in the early game.

Five-Pronged Hammer I into the Mid Game 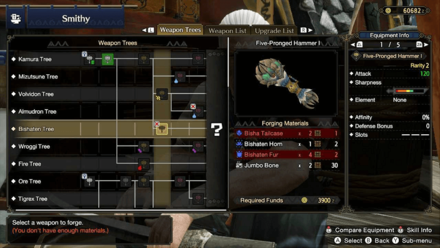 Bishaten's Five-Pronged Hammer I pretty much covers the road to the mid game with solid stats across the board. Activate its Silkbind Boost Rampage Skill to increase the Hammer's silkbind attacks!

An armor combination that compliments the Hammer's straight-forward playstyle. The skills within this set goes all in on damage.

Register as a member and get all the information you want. (It's free!)
Login
Opinions about an article or post go here.
Opinions about an article or post
We at Game8 thank you for your support.
In order for us to make the best articles possible, share your corrections, opinions, and thoughts about "Hammer Builds and Best Equipment | Monster Hunter Rise" with us!
When reporting a problem, please be as specific as possible in providing details such as what conditions the problem occurred under and what kind of effects it had.