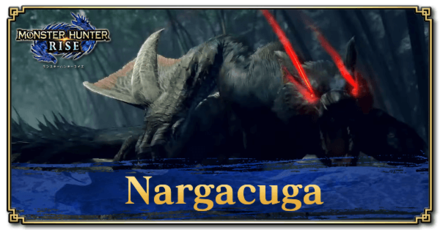 This is a hunting guide for Nargacuga, a Large Monster in Monster Hunter Rise (MH Rise) and the Sunbreak DLC. Read on to learn Nargacuga's weaknesses, weaknesses, forgeable weapons and armor, drops, and attack patterns for Master Rank!

How to Unlock Nargacuga 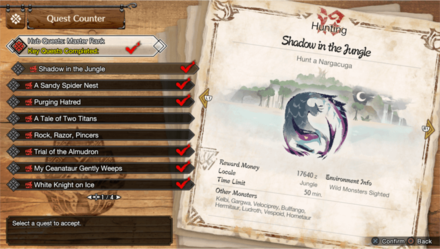 MR Nargacuga is unlocked by reaching M★3 and completing the Urgent Quest Keep it Busy and in the Sunbreak expansion. 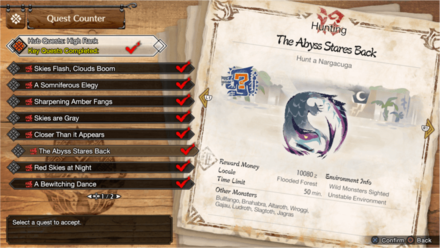 High Rank Nargacuga is unlocked by completing the Urgent Quest A Bewitching Dance and reaching HR 6. 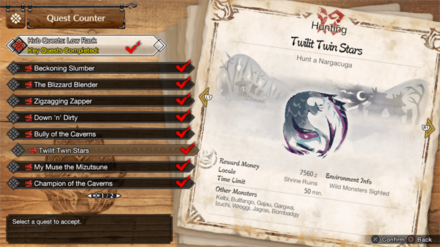 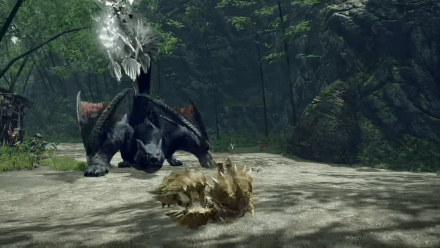 The Nargacuga is a beast of the shadows, and becomes enraged by bright light. At the risk of missing the mark and simply riling it up further, its excellent hearing can be exploited by throwing a Sonic Bomb as it pauses to focus. It can destory Pitfall Traps, so be discreet when placing them.

How to Beat Nargacuga

Be Aware of Nargacuga's Enraged Mode

Nargacuga's enraged state occurs when its eyes start to change in color. When enraged, Nargacuga's eyes change from their standard yellow color to bright red, with the red color reaching up to its ears.

The transition to Nargacuga's enraged state is followed up by a roar, so be prepared to dodge or block it and take advantage of its vulnerable state.

Nargacuga's signature speed and mobility make it a very dangerous monster to hunt. Given this, we recommend that you maintain vision of the monster at all times using Monster Hunter Rise's Target Camera so you can dodge or block its attacks with relative ease.

Target Lock: How to Use the Lock On Camera and Targeting Arrow

While severing Nargacuga's tail won't stop its Spike Shot attack, it will reduce the range and damage of its Spiked Tail Slam. Doing this will greatly increase your survivability in the hunt, so make it a habit to cut off Nargacuga's tail when possible.

To mitigate Nargacuga's mobility, prioritize breaking its forelegs. Doing this will severely reduce its speed and adds a chance for it to trip whenever it performs certain leaping attacks.

However, note that its forelegs can deflect most weapons that only reach Green sharpness or lower, so consider using Mind's Eye if crafting Blue sharpness weapons is not yet possible.

Be Mindful With Your Pitfall Traps

Unlike Shock Traps, Nargacuga can easily break Pitfall Traps in its normal state. To avoid wasting these traps, only use them while Nargacuga is enraged!

In addition to its attacks in Low and High Rank quests, Nargacuga uses the following attacks in Master Rank.

Nargacuga picks a target before swiftly lunging towards them, dealing moderate damage on contact. Each variation of this attack can cover fairly long distances so hunters should be prepared.

Take note that Nargacuga can perform two to three lunges and end its combo with a Diving Pounce, Tail Whip, or Tail Spin.

Always be mindful of your positioning to dodge or block this attack! See this attack's variations below:

Nargacuga observes its prey, stalking or staring at them for a few seconds before turning around with a quick hop to slam its tail down. This attack can easily KO careless hunters so stay alert when Nargacuga begins stalking.

This attack has variations depending on whether you're hunting a Low or High Rank Nargacuga:

In order for us to make the best articles possible, share your corrections, opinions, and thoughts about 「Sunbreak Nargacuga: Weakness and Drops | Monster Hunter Rise」 with us!