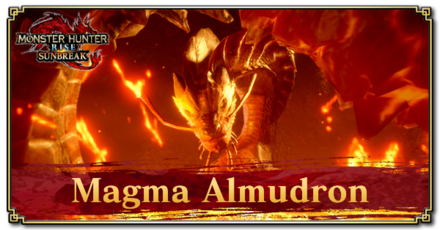 This is a hunting guide for Magma Almudron, a Large Monster in Monster Hunter Rise (MH Rise), and the Sunbreak DLC. Read on to learn Magma Almudron's weaknesses, forgeable weapons, forgeable armor, drops, and attack patterns for Master Rank!

How to Unlock Magma Almudron

Complete In Search of the Doctor in MR 4 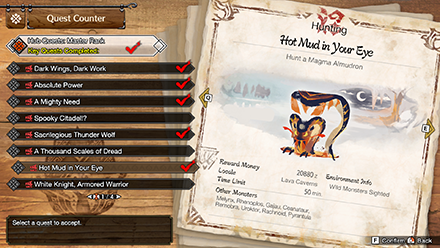 Magma Almudron is unlocked by defeating Astalos in the M★4 Urgent Quest In Search of the Doctor. 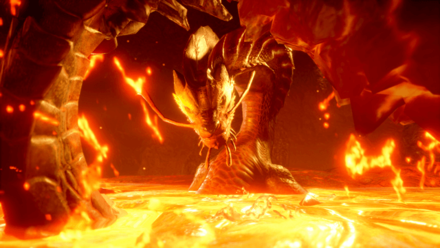 Characterized by raging attacks using the magma rock on their tail. A larger rock means more powerful attacks. Attacking the tail can cause the rock to explode, causing damage. Enters a heated, softer state when preparing a rock of after moving around underground, making the perfect time to attack.

How to Beat Magma Almudron

Magma Almudron will occasionally spawn rocks in the arena, which would explode over time. Be wary of this as they tend to inflict a great deal of damage to unsuspecting Hunters in its area of effect.

When Magma Almudron burrows itself underground to perform a move, it re-emerges with red limbs. The lava underground softens these parts, making it a huge weak point you can exploit until it hardens again.

Magma Almudron inflicts Fireblight, especially on attacks that involve magma. Fireblight deals damage over time so it can be detrimental if left unchecked. Roll three times or once over water to cure this blight.

You may also use Nulberries but rolling is free and sometimes quicker.

Most of Magma Almudron's tail attacks spawn lava pools that travel in a line. Don't run straight to its tail but instead evade sideways to avoid the pools.

Unlike its mud cousin Almudron, using Flash Bombs would not cause Magma Almudron to drop the mud ball. It can only be destroyed by dealing enough damage.

Know the Difference Between The Two Tail Explosion Variations

During the fight, Magma Almudron will execute a Tail Explosion move that looks a lot like Teostra's Supernova. The number of explosions depends if Magma Almudron is carrying a magma ball or not.

If it's not carrying a ball, the tail will only explode once. If it's carrying a magma ball, it would explode twice - one for the tail, and one for the ball. Learn this well to know when to go aggressive after the move.

Almudron will occasionally slam its tail on the ground, creating a huge explosion that deals a lot of damage. The number of explosions depends on if Magma Almudron is carrying a ball or not.

In order for us to make the best articles possible, share your corrections, opinions, and thoughts about 「Sunbreak Magma Almudron: Weakness and Drops | Monster Hunter Rise」 with us!