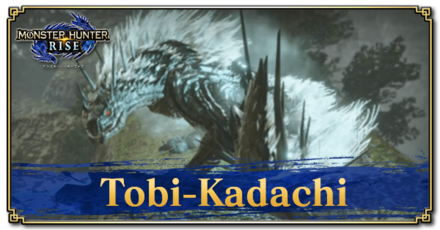 This is a hunting guide for Tobi-Kadachi, a Large Monster in Monster Hunter Rise (MH Rise) and the Sunbreak DLC. Read on to learn Tobi-Kadachi's weaknesses, forgeable weapons, forgeable armor, drops, and attack patterns for Master Rank!

How to Unlock Tobi-Kadachi 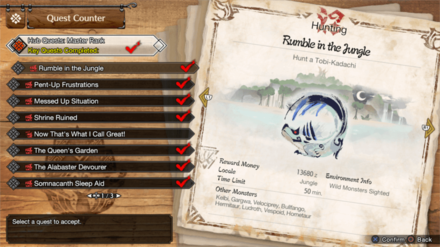 MR Tobi-Kadachi is unlocked by reaching MR 2 and completing the Urgent Quest Provoking an Anjanath's Wrath in the Sunbreak expansion. 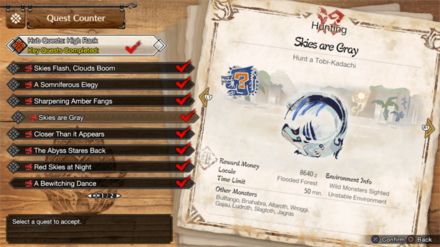 High Rank Tobi-Kadachi is unlocked by completing the Urgent Quest A Bewitching Dance and reaching HR 6. 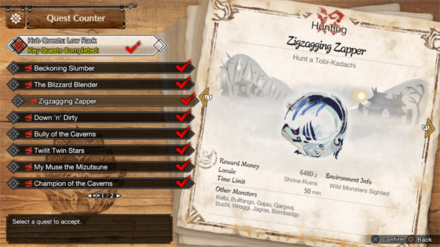 Always keep the Tobi-Kadachi in your sights to avoid being ambused from behind. The key to defeating this monster is to immobilize it and prevent it from reaching a charged state. If you can make use of endemic life to afflict it with waterblight, it'll no longer be able to charge itself up.

How to Beat Tobi-Kadachi

Tobi-Kadachi is most vulnerable to the Water element. Bring a weapon with this particular element to take advantage of its weaknesses and make the fight less challenging.

Tobi-Kadachi can inflict Thunderblight during its Charged State, which makes hunters more susceptible to stuns.

You can negate this deadly status with a Nulberry, so always bring a stack of them into the hunt! In addition, remember to check your base camp's Supply Box for any free Nulberries.

Tobi-Kadachi builds up electricity in its scales which eventually leads into a fully Charged State. Below are the notable changes to Tobi-Kadachi during this state:

Tobi-Kadachi's strongest weapon is its speed. Consider using the Target Camera to quickly regain vision of Tobi-Kadachi whenever it attempts to flank you!

Prioritize Breaking Its Head, Back, and Tail

Breaking Tobi-Kadachi's head, back, and tail significantly reduces the potency and effectiveness of its Charged State, making the fight a lot easier!

Tobi-Kadachi's Gliding Attacks may seem difficult to avoid at first, but they are actually easy to dodge!

The key to avoiding these attacks lies in Tobi-Kadachi's movements in the air — Read on to know more:

Knock Tobi-Kadachi Off Trees and Rocks

Tobi-Kadachi can hang on trees and wait for an opportunity to attack via its somersault attack. It is extremely vulnerable in this state and can be knocked down to the ground via heavy damage or by using Flash Bombs.

In addition to its attacks in Low and High Rank quests, Tobi-Kadachi uses the following attacks in Master Rank.

Tobi-Kadachi charges up its Gliding Attacks even further in Master Rank, causing them to hit harder and crackle with electricity on impact.

Tobi-Kadachi lunges forward to bite its target. This attack allows Tobi-Kadachi to cover a good amount of distance at high speed. This particular attack has two patterns.

Tobi-Kadachi can also use its massive tail on the ground to deal with hunters that get too close. This attack has three variations.

In order for us to make the best articles possible, share your corrections, opinions, and thoughts about 「Sunbreak Tobi-Kadachi: Weakness and Drops | Monster Hunter Rise」 with us!