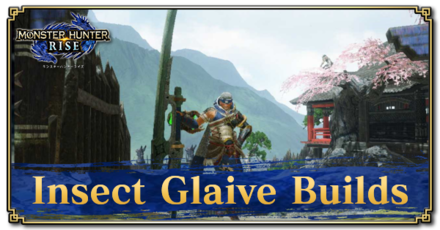 This is a guide to the best builds and equipment for Insect Glaive in Monster Hunter Rise (MH Rise) for the Nintendo Switch. Learn about the best Insect Glaive, and the best Skills and Armor pieces to use with the Insect Glaive for Low Rank, High Rank, and endgame.

Evening Calm's great sharpness bar and high affinity rating (40%) make it the perfect all-purpose Insect Glaive currently in Monster Hunter Rise and is a great compliment to our suggest build below.

With our Insect Glaive end game build, we focus on maxing out our damage output by going for full affinity build partnered by a maxed out Critical Boost. You also retain Power Prolonger 2 from the Dober Vambraces and an Enhancer Jewel so your kinsect buffs also lasts long.

Evening Calm All The Way!

Nargacuga's Evening Calm boasts great stats across the board and can take you all the way to 7★ Hub Quests!

This build is an enhanced version of the 4★ to 5★ build that utilizes the Critical Eye, Power Prolonger, and Jump Master skills. Razor Sharp has been added in to retain your sharpness level during fights which further increases your damage output (sharpness have a damage multiplier). If you can slot in an Attack Boost 2 Talisman, the build's damage output will get even higher but is not required.

Princess Regalia offers on-par stats to the Iron Bayonet II with the added benefit of Poison Element. Consider this weapon down the line as you go through 4★ and 5★ Hub Quests.

This set aims to get the best of both worlds from Critical Eye and Power Prolonger which are both great skills for the Insect Glaive. With Jump Master mixed in, your aerial combat becomes more fluid and easier to execute so get those extracts, fly in the air, and keep landing those critical hits!

Sinister Staff I is an All-Purpose Powerhouse 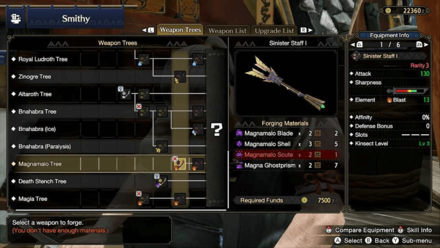 Sinister Staff I offers excellent stats across the board and Blast Element, making it an efficient weapon for any hunt at this stage of the game. 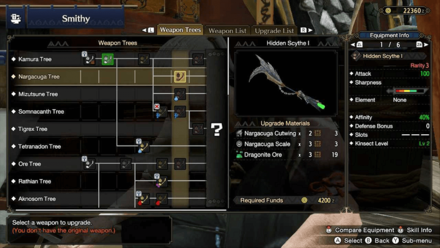 Those who would rather pump as much affinity into their builds as possible may consider going for the Hidden Scythe I. While its attack rating may fall short when compared to the Sinister Staff I, this particular Insect Glaive makes up for it by having 40% affinity!

You can take its affinity rating higher by activating its Affinity Boost I Rampage Skill.

Further improving on the early game sets, this particular armor combination tweaks the balance between offense and utility skills for the mid game.

Wearers of this set reach 60% affinity when Latent Power Lv. 2 is active while managing stamina consumption via Constitution.

Steel Blade and the Ore Tree 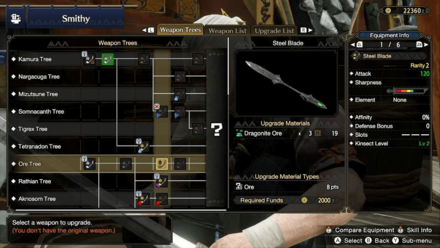 The Insect Glaive's Ore Tree features weapons with solid stats across the board for relatively cheap materials.

Steel Blade, in particular, earns its spot as an all-purpose weapon in the early game because of its attack rating and sharpness bar. 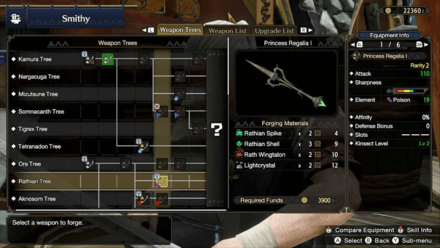 While it is 10 short in the attack department, the Princess Regalia I is still on par with the Steel Blade regarding the other stats and comes with Poison Element.

The full Izuchi Set is a great starter for insect glaive users because of its good balance of attack and utility skills.

Constitution, in particular, is useful for Insect Glaive users as it decreases stamina consumption of actions that have fixed stamina costs such as dodging and blocking.

This applies to the Insect Glaive's aerial dodges as well!

This armor combination is a straight-up improvement of the starter set, making it a great set leading into the mid game.

Register as a member and get all the information you want. (It's free!)
Login
Opinions about an article or post go here.
Opinions about an article or post
We at Game8 thank you for your support.
In order for us to make the best articles possible, share your corrections, opinions, and thoughts about "Insect Glaive Builds and Best Equipment | Monster Hunter Rise" with us!
When reporting a problem, please be as specific as possible in providing details such as what conditions the problem occurred under and what kind of effects it had.