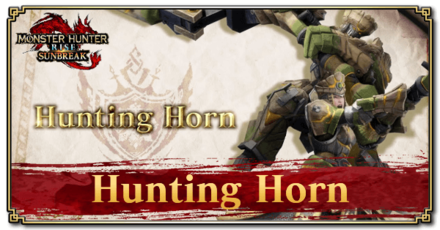 This is a guide to the Hunting Horn, a weapon in Monster Hunter Rise: Sunbreak (MH Rise). Read on to learn about new Hunting Horn controls, best combos, all Hunting Horn songs and changes as well as details on Hunting Horn Switch Skills.

Hunting Horn had an overall great performance in MH Rise and it's back for more in Sunbreak.

It received a lot of increases across the board - most especially the increase in Blight Negation effectiveness of certain notes - makes Hunting Horn a great pickup even for those who wants to support their team!

When this Silkbind Attack is used, the hunter jumps up with the Wirebug then plays a short melody. Afterwards, all follow-up attacks performed deal additional hits for a short period of time.

The additional hits come from small melodic orbs that stay for in the air for a moment before bursting to deal impact damage. These can be useful for stunning monsters faster!

This Switch Skill uses the momentum of the Hunting Horn to deal an additional hit by swinging sideways rather than smashing overhead. This two-hit attack lets you quickly shift directions, so it helps with repositioning during a hunt.

Not introduced in any trailer, Sonic Bloom is an additional Silkbind Attack added to the Sunbreak Expansion.

It is a single burst damage move that deals an insane amount of damage after playing melodies. Useful for when a monster is asleep and you get that 2x wake up damage multiplier!

How Good is the Hunting Horn?

The Hunting Horn continues to perform as the perfect hybruid: both a damage dealer and support weapon. The addition of new melodies like Sharpness Regeneration gives it the ability to maintain high sharpness & the inherent sharpness damage multiplier.

However, with how the meta is shifting into elemental damage, this is one of the weapons that do not fully maximize that shift. 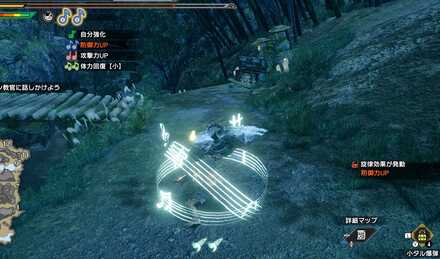 In previous games, Hunting Horn players were required to use the Perform action before yielding the results of the notes they played. In Monster Hunter Rise, for the first time, players can receive these boons as soon as the notes are played, making it much easier to continue moving and acting while simultaneously providing buffs to the team. 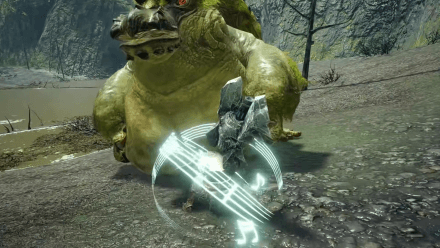 There is a multitude of melodies that can buff the Hunting Horn user and the other hunters. The variety of possible boosts, such as Attack Up, Defense Up, and Sonic Barrier, allows them to assist the team effectively to suit the situation.

By playing three notes and pressing zR + X or MB4 + Left Click, players can execute the new Magnificent Trio attack, which allows them to provide the effects of all stored Notes. Like previous games, this requires the player to first Perform the notes, but being able to gain the advantages of all notes while simultaneously inflicting an attack makes it a significant buff to the Hunting Horn. 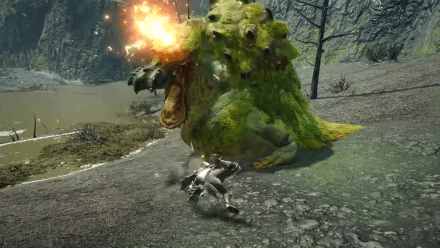 The Hunting Horn has a surprisingly long reach, and can even aim for body parts positioned higher than most, like the head and the tail.

It is one of the two heavy weapons that cannot guard (the other being the hammer). However, with the new Silkbind Attack, Slide Beat, it might be possible to go through attacks without getting damaged.

This is not true as the Hunting Horn was shown to have a high damage output. With the Bonuses the horn gives itself and allies, the damage can go even further!

Melodies Need to be Refreshed

Melodies need to be refreshed every few minutes. Although Monster Hunter Rise improves the situation by removing the need to use the Perform action, players will need to keep melodies in mind at all times while battling to maximize their effectiveness.

Slide Beat is a Silkbind Attack that leaps forward and does damage. In the video, it also appears that it can shake off attacks and continue moving.

The hunter uses one Wirebug and attacks upwards and lands back down to play a melody. The hunter is then empowered (their Hunting Horn and right hand glows white) and gains affinity for 30 seconds. During this duration, all attacks deal additional hits.

Earthshaker is a Silkbind Attack that attaches the Ironsilk to a blade and drives it into the monster. The hunter then uses the horn to pound sonic waves into the afflicted body part, dealing damage to it.

Bead of Resonance is a unique attack that allows for long-distance usage of melody effects. In it, the hunter places a Wirebug cocoon which creates the same effects the hunter plays on the Horn. This allows teammates to battle near the cocoon while the Hunting Horn user stays out of the fray.

The cocoon also creates a Sonic Wave which damages nearby enemies, further benefiting the hunters who fight near it.hand glows white) and gains affinity for 30 seconds. During this duration, all attacks deal additional hits.

A single burst damage move that deals an insane amount of damage after playing melodies. Useful for when a monster is asleep and you get that 2x wake up damage multiplier!

We suggest using this one because it increases how much stun you can bring to the table. The Hunting Horn itself is powerful enough so sacrificing a little bit of damage for extra KO is fine.

This allows you to input one melody at a time and play it with zR. This feels like the old Hunting Horn where you can play notes after lining them up. This one plays notes immediately, not like the old games where the player will play for a long time while being susceptible to attacks.

A support-oriented Silkbind Attack that switches out Earthshaker. This allows the Hunting Horn user to place a resonance bead that will play notes even if the Horn user is far away. The cocoon also creates a Sonic Wave which damages nearby enemies, further benefiting the hunters who fight near it.

It also stacks melody effects from the same hunter so it's perfect for support-oriented gameplay. If you play Hunting Horn mainly to support, use Bead of Resonance. If you value DPS more than anything, Earthshaker is the obvious choice.

In contrast to Crush Attack Combo where the Hunter is stationary, Swing Combo allows for mobility and meneuverability while slapping the monster with the Horn. Use this if you want to reposition while dishing damage and hitting all notes.

The hunter uses one Wirebug and attacks upwards and lands back down to play a melody. The hunter is then empowered (their Hunting Horn and right hand glows white) and gains affinity for 30 seconds. During this duration, all attacks deal additional hits.

A single burst damage move that deals an insane amount of damage after playing melodies. Useful for when a monster is asleep and you get that 2x wake up damage multiplier!

Magnificent Trio is a new technique that plays three Hunting Horn Notes at once. In addition to executing a multi-hit attack, it also allows you to provide the effects from all stored Hunting Horn notes, making it a highly powerful action.

Infernal Melody is a super song that requires you to fill the Hunting Horn's gauge to unleash the move. This executes multiple attacks while playing the Song of Raging Flame which boosts yourself and your allies' attacks by 20% for a while.

Take note: you can only use Infernal Melody after a Magnificent Trio or Slide Beat.

With all the changes in the Hunting Horn, which includes automatic melody performance which encourages a fast-paced playstyle, the melody system has changed as well. There is now only a total of three notes that can be played with a single Hunting Horn. This encourages building multiple Horns for different situations!

Playing the same melodies at the same time only refreshes the melody timer not stack the effects and time. For example, if you play an Attack Up melody one after another, it will not stack the attack buff and the remaining melody timer.

All Hunting Horn Songs and Effects

Recommended Combos For the Hunting Horn

If you have a Sonic Barrier Hunting Horn, we suggest doing this so you would have Sonic Barrier active and not get knocked back when you execute Magnificent Trio.

Highpower Combo For Whenever Monsters are Stunned 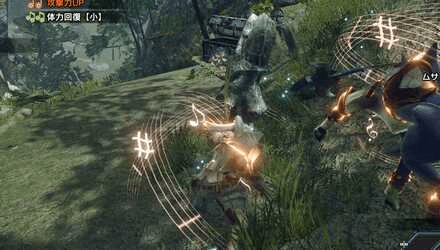 This combo is recommended when you've played all three notes and are ready to do Magnificent Trio.

Tips on How to Use the Hunting Horn

Use Melodies to Support Teammates 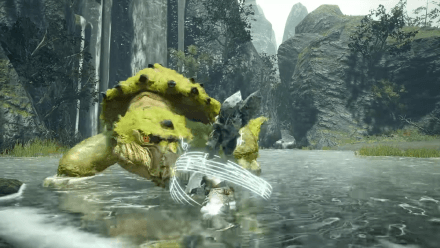 It should go without saying that Hunting Horn users should use melodies and keep them active as their priority.

They can queue up melodies outside of fights and play them during fights to not waste time queuing up the melodies. Hunting Horn users should also combo playing the notes with effective timing to ensure they can play the notes as quickly as possible during a battle.

Use Attack Up and Sonic Barrier

With how the melodies have changed from the past games to Rise, some melodies are not present anymore per weapon. If possible, look for weapons with Attack Up (increases attack) and/or Sonic Barrier (one-time knockback protection). These are great offensive melodies that help the now DPS-inclined Hunting Horn. 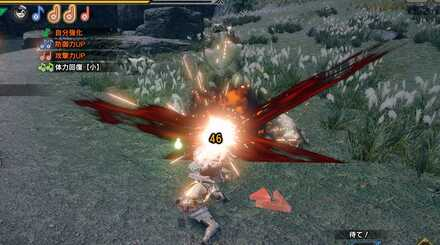 With their new potential to unleash melodies as soon as they're played, Hunting Horn users are more equipped than ever to provide buffs for their team while dishing out attacks at the same time!

Aim for the Monster's Head 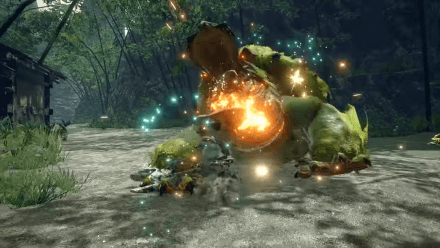 The Hunting Horn, like the Hammer, is a blunt weapon. This allows its users to aim for a stun when attacking the head, and its comparatively long reach makes this achievable.

Stun locking a monster is incredibly useful for Hunting Horn mains and the other hunters as well, so try to aim for the head as much as possible.

Use Magnificent Trio When There is a Huge Opening

Whenever you need to play Magnificent Trio, we suggest waiting for a huge opening before playing the notes. Unless you have Sonic Barrier, any attack can interrupt you while playing. Execute this attack while the monster is stunned, downed, trapped, or paralyzed.

Self-improvement (zR) has an iFrame

When you execute Self-improvement (zR) while on Melody Mode: Performace, the initial breakdance motion has a huge invulnerability frame at the start. Use this to negate roars and other attacks!

In order for us to make the best articles possible, share your corrections, opinions, and thoughts about 「Sunbreak Hunting Horn Guide: Combos, Controls and Moveset | Monster Hunter Rise」 with us!