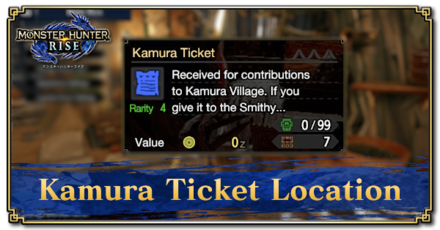 This is a farming guide for Kamura Ticket, an item in Monster Hunter Rise (MH Rise). Check here for all Kamura Ticket locations and drop sources, as well as Kamura Ticket uses in equipment and decoration crafting.

Kamura Ticket - How to Farm 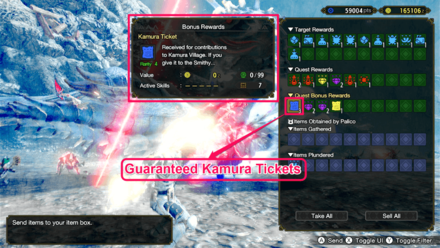 The Gales of Ibushi Blow Again event quest guarantees anyone, HR8 or higher, with a Kamura Ticket at the end of the quest. It will be available as a quest bonus reward.

Doing this quest a couple of times is much easier than doing several quests for a chance to get a Kamura Ticket from Fugen.

Rewarded After Several Quests by Fugen 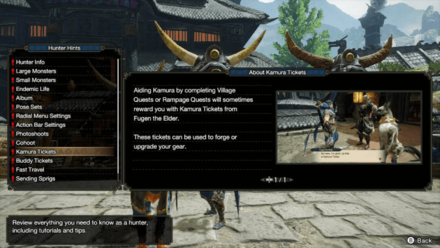 After completing an event quest, rampage quest, or a village quest, Elder Fugen will randomly reward you with a Kamura Ticket. Keep on doing quests to net those Kamura Tickets!

Speak to Fugen to Get Kamura Tickets 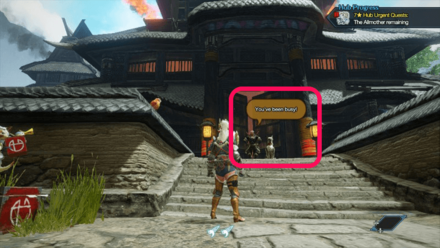 A yellow speech bubble will signal that an NPC will give you something and in Elder Fugen's case, this will be in the form of Kamura Tickets.

For farming, prioritize hunts or delivery quests that can be completed extremely fast in order to reduce the farming time. We recommend delivery village quests, like Roly-Poly Lantern, which can be completed quickly - at around 20 seconds if you have the Sub-Camp unlocked in the Shrine Ruins.

For farming via delivery quests like the quest above, we recommend equipping the Leather Armor S, as it provides skills that will increase the amount of items received from gathering (Geologist) and more than enough slots to max those skills out.

Kamura Ticket - How to Use

The Kamura Ticket is a rare material that can be used to create cosmetic weapons. These weapons aren't purely for cosmetics, as they also offer decent stats but are easily outclassed by other weapons later into the game.

In order for us to make the best articles possible, share your corrections, opinions, and thoughts about 「Kamura Ticket Location: How to Farm and Uses | Monster Hunter Rise | MHR (MH Rise)」 with us!