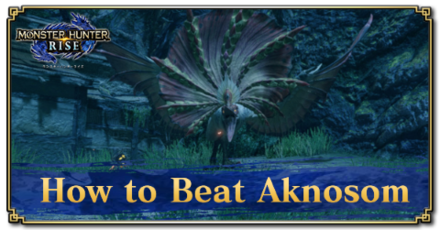 This is a hunting guide for Aknosom, a Large Monster in Monster Hunter Rise (MH Rise) and the Sunbreak DLC. Read on to learn Aknosom's weaknesses, forgeable armor and weapons, drops, and attack patterns for Master Rank! 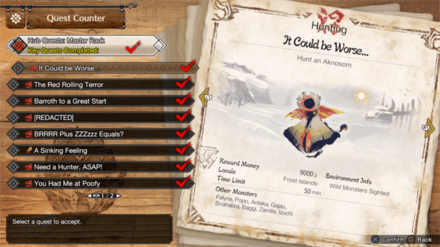 MR Aknosom is unlocked by reaching MR 1 and completing the Urgent Quest Tetranadon Blockade in the Sunbreak expansion. 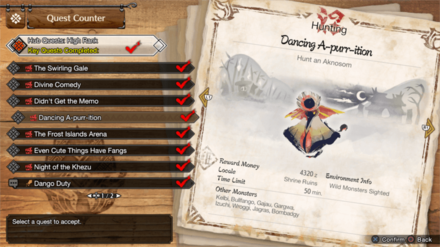 High Rank Aknosom is unlocked by completing the Urgent Quest The Blue Apex and reaching HR 4. 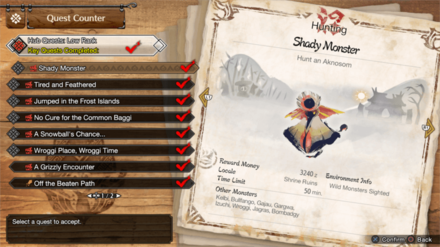 Low Rank Aknosom is unlocked from the start at HR 1. 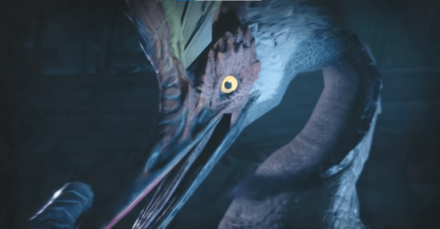 It can manipulate the umbrella-shaped crest on its head to curl up, fan out, or shut tight. Observe its shape closely, and you might be able to predict which attack it will use next. 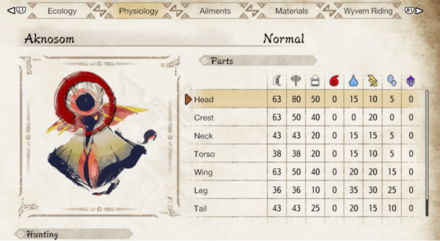 Aknosom is most vulnerable to Water and Thunder. Bring weapons with these particular elements to take advantage of its weaknesses and make the fight less challenging.

Aknosom's fireball attacks can inflict Fireblight, which deals damage over time. Negate this potentially deadly status ailment by bringing Nulberries to the hunt.

Aknosom's primary weak points are its crested head and wings, so prioritize dealing damage to these body parts as often as possible.

Aknosom's fireball attacks tend to bounce and leave lingering flames on the ground. These flames make it difficult to close the distance to Aknosom and also inflict Fireblight on contact.

We recommend moving Aknosom toward wet areas to stop its fireballs from bouncing and causing lingering flames. You can do this by luring it with a Stinkmink or Wyvern Riding the monster towards these locations.

Aknosom is a fast monster and often chains its attacks one after another. Prepare to evade or guard at all times and avoid overcommitting with attacks to prevent yourself from being overwhelmed by this monster.

In contrast to its Low and High Rank variants, Master Rank Aknosom performs its attacks quicker and has improved tracking on each of its moves.

Additionally, Aknosom uses the following attacks in Master Rank on top of its moves from Low and High Rank quests.

Aknosom can spit out fireballs from its flaming beak. These fireballs deal moderate damage and inflict Fireblight on contact, with some of them even leaving lingering flames on the ground.

In order for us to make the best articles possible, share your corrections, opinions, and thoughts about 「Sunbreak Aknosom: Weakness and Drops | Monster Hunter Rise」 with us!