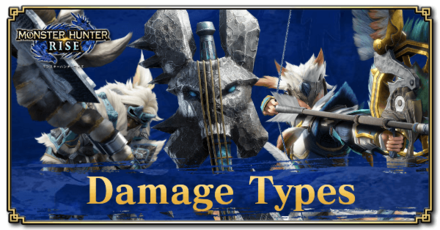 In Monster Hunter Rise (MH Rise), there are three types of damage: sever, blunt, and projectile. Each of them have their own benefits and effectiveness on monsters' body parts. Find out more about each damage type by reading on!

Sever damage allows you to cut the tail off of a lot of monsters, which you can then carve for materials.

Most of the Great Sword's attacks deal sever damage, save for a couple moves.

All the attacks done with the sword deal sever damage.

All the attacks done with the lance itself deal sever damage.

The Gunlance mostly deals sever damage. Meanwhile, most of its shelling deals fixed damage, meaning it deals the same damage regardless of whatever body part it hits.

The Charge Blade can deal sever damage when you have either an Elemental or Impact Charge Blade with no phials active.

Light Bowguns and Heavy Bowguns, if they have the capacity for it, can fire Slicing Ammo. Slicing Ammo deals sever damage, so when aimed at the tail, it can definitely cut it off. If you look closely, you can see that it has a special slicing animation when it goes off!

Blunt damage can stun a monster whenever it hits the monster's head, giving you time to whale on the monster with powerful combos. Whenever you hit the head with blunt damage, it has a small lightning animation upon hit.

A couple of the Great Sword's attacks deal blunt damage: the Side Blow attack as well as the Tackle attack.

While it's very niche, the Gunlance can deal blunt damage. It can only be dealt with the Wyrmstake Cannon attack, and is limited to Wide Shelling Type.

The Charge Blade can deal blunt damage when you have an Impact Charge Blade and the phials are active. Same goes for Elemental Charge Blades with Impact Phials equipped and active.

It can also deal blunt damage with Guard Points and perfectly-timed blocks if the shield is charged.

The Light Bowgun's Melee Attack is the only attack that can deal blunt damage.

The Heavy Bowgun's Melee Attack is the only attack that can deal blunt damage.

If the Light Bowgun or Heavy Bowgun has the capacity for it, they can use Sticky Ammo on monsters' heads to deal blunt damage!

Projectile damage is unique to ranged weapons. As you may already know, ranged weapons are known for the wide variation of ammo and phials you can use.

Ranged weapons also have critical distance, which determines how much damage you do depending on how far away you are from the monster.

Post (0 Comments)
Opinions about an article or post go here.
Opinions about an article or post
We at Game8 thank you for your support.
In order for us to make the best articles possible, share your corrections, opinions, and thoughts about "Damage Types: Difference Between Sever, Blunt, Projectile Damage | Monster Hunter Rise" with us!
When reporting a problem, please be as specific as possible in providing details such as what conditions the problem occurred under and what kind of effects it had.