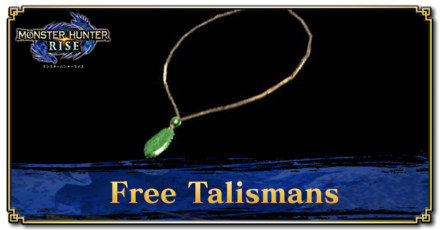 All of the Free Talismans in Monster Hunter Rise for PC and Switch, including how to get both the Novice and Legacy Talismans.

Talismans are equipment that offer various skills with stat boosting effects. They sometimes offer slots for decorations that give MH Rise players an extra edge on customizing their preferred builds.

From time to time, Capcom gives talismans through Senri the Mailman. These talismans are usually designed to help players blaze through early game quests and content.

This talisman is part of the Black Belt armor set and was released this February 24, 2022 along with Update 3.9.

The Veteran talisman is a decent starter talisman for those who aim to use bows or insect glaives as their main weapons. The Constitution level 1 and Recovery Up 2 are perfect for those early game hunts.

This talisman was a part of the Guild Cross armor set released on October 29, 2021. The Legacy Talisman is not much different from the Novice Talisman except for its Hunger Resistance skill at level 1.

Depending on your early build, Hunger Resistance might be beneficial. However, we do suggest that you stick to the Novice Talisman for now for its Critical Eye level 1.

It's not the greatest talisman ever, but we think it is more of a reference to the relationship between hunters and monsties in the Monster Hunter Stories franchise.

Novice Talisman is the first talisman Capcom gave to its players, this can be claimed via the Courier at the very start of the game if you have made a pre-purchase of MH Rise for PC or Switch.

As an early game talisman, it does not offer a lot for veteran players. But since you would be doing a lot of exploring at the start, the Wall Runner skill can be useful at this point of the game. So be sure to take advantage of this!

How to Get the Free Talismans

Talk to the Courier 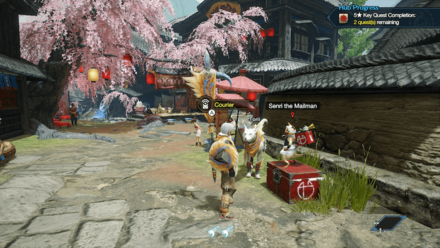 In order for us to make the best articles possible, share your corrections, opinions, and thoughts about 「Free Talismans | Monster Hunter Rise | MHR (MH Rise)」 with us!