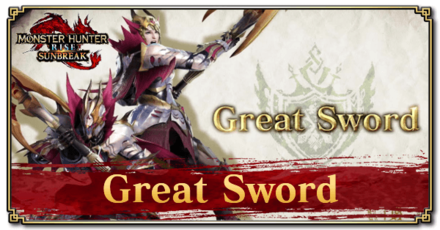 The Great Sword received a significant buff in almost all of its moves making it one of the best weapons out there.

The buff on True Charge Slash is even more prominent considering Hunters can easily land one using the new Strongarm Stance Switch Skill in Sunbreak.

What more, Hunting Edge now only costs 1 Wirebug and is greatly spammable. Great Sword is definitely one weapon to watch out for.

Using Strongarm Stance, the hunter reinforces their arms and their weapon to fend off attacks. This move works like a counter, where getting hit in this stance while charging causes the hunter to quickly charge the Great Sword, allowing you to punish the monster!

Successfully executing Strongarm Stance skips one (1) Great Sword charge level so using it after the first charge will get you straight to True Charge Slash!

This Switch Skill trades the traditional charging playstyle of the Great Sword for one that deals a combo of hits. In addition, the Surge Slash Combo needs proper footwork. But when done right, you can string together a large number of combos!

Backslide was not announce in any trailer but is included in the Sunbreak expansion. This move gives the Great Sword mobility options while maintaining aggressiveness as using this move preserve the charge level on your Great Sword!

How Good is the Great Sword? 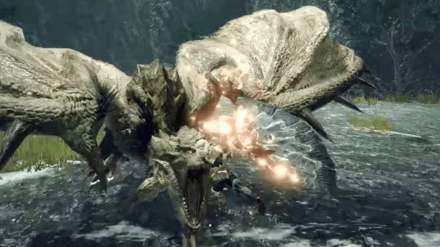 The Great Sword is unrivaled by other weapons when it comes to single-hit attack damage. Using the Great Sword requires precise timing because that single attack needs to hit to effectively deal damage.

Hit-and-Run is a Viable Technique

Because of its high single-hit attack damage, the Hit-and-Run style of play is very viable for the Great Sword. With the introduction of Strongarm Stance in Sunbreak, this playstyle more relevant than ever before.

The Great Sword Can Guard

The Great Sword can guard against attacks from monsters. However, this depletes the sharpness of the Great Sword so just use this during emergencies.

The addition of Strongarm Stance greatly improved the capability of the Great Sword to go toe-to-toe with any monster while dishing big damage. When done successfully while charging, you can counterattack with a quick-charged True Charged Slash! 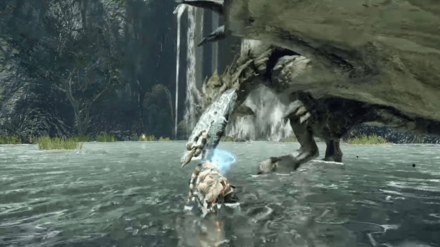 The introduction of various mobility silkbind moves and options gives the Great Sword the much needed mobility boost from Base MHRise. This mitigated one of the most pressing weakness it has - poor mobility.

Guarding using the Great Sword consumes sharpness. Take note, the sharpness it loses is greater than when attacking so only guard during emergencies!

Hunting Edge is a Silkbind Attack that launches the hunter upward and can be followed up with charged attacks. This is similar to the charging attack while airborne in Aerial Style from Monster Hunter Generations. This moves also requires two Wirebugs.

This move can be switched out with Hunting Edge. The hunter consumes two Wirebugs and goes into a stance where they glow blue for a second. While they're in this stance, they can counter any attack. If they successfully counter an attack, they can quickly charge up their Great Sword for a devastating blow.

Adamant Charged Slash is a newly-announced Silkbind Attack that was not featured in the January Switch Demo.

This attack can be switched out with Hunting Edge. The hunter uses the Wirebug to dash straight ahead, then unleashes a Strong Charged Slash.

Adamant Charged Slash also has the advantage of withstanding knockdown attacks while the attack is being executed. Take note that this only offers knockback protection and not damage immunity.

Power Sheathe sends you forward in the direction you're facing and then sheathes your weapon. This also temporarily increases your attack power for the next few seconds, indicated by a blue glow. Power Sheathe works well with this weapon because hunters usually sheath the Great Sword for better mobility.

Backslide was not announce in any trailer but is included in the Sunbreak expansion. This move gives the Great Sword mobility options while maintaining aggressiveness as using this move preserve the charge level on your Great Sword!

A shoulder thrust move that allows you to withstand more powerful attacks than the usual Tackle. This allows you to charge more properly while tanking attacks that are bound to throw you off. The downside with this one is the longer tackle time, so you have to recalibrate your timings.

Rage Slash is an improvement over the True Charged Slash so we recommend slotting it in when you get it. It absorbs some damage and uses them to strengthen the charge attack which is always good for the Great Sword!

A replacement to the usual Charged Combo that Great Sword users love, this opens up the Great Sword to sniping gamestyles due to its fast, sweeping attacks that actually deal tons of damage per hit.

Uses a Wirebug to dash forward to deliver a Strong Charged Slash. This move has knockback protection while dashing but will not negate all damage. Only use this for attacks you know you can survive.

This move can be switched out with Hunting Edge. The hunter consumes two Wirebugs and goes into a stance where they glow blue for a second. While they're in this stance, they can counter any attack. If they successfully counter an attack, they can quickly charge up their Great Sword for a devastating blow.

This is purely an evasive maneuver using Wirebugs. Can also be used while charging as it retains charge levels while charging your Great Sword - balancing safety and aggressiveness perfectly. Use this whenever you're up against a really mobile monster.

The True Charged Slash makes a return in Monster Hunter Rise! It's the strongest hitting move of the Great Sword and utilizing it properly is the key to mastering the Great Sword.

The Wide Sweep and Leaping Wide Slash attacks return in Monster Hunter Rise! These moves can hit a wide area (hence the name) and apply ailments on multiple monsters! Leaping Wide Slash has also been changed to deal multiple hits if done after tackling out of charged attacks.

Recommended Combos for the Great Sword

This combo purposely initiates a self-inflicted damage using a Small Barrel Bomb to proc Strongarm Stance and deliver a devastating True Charged Slash. This is perfect for waking monsters up!

This combo primarily makes use of Strongarm Stance anytime while charging. The move goes straight to True Charged Slash to deal maximum damage!

A combo that allows players to get to True Charged Slash at the fastest time even when the weapon in sheathed. Useful for when the monster is down or you only have a small opening.

This combo uses two Switch Skills with Super Armor to tank some enemy attacks. We recommend using this combo during enemy roars. If you are attacked while you have Super Armor, you will only receive reduced damage so you can use this on powerful enemy attacks as well. Be careful with chaining moves though as the Super Armor can only negate knockback for one move.

This combo is similar to the Fastest Slash Combo—except you charge up your final hit to its strongest form. It's better to use this combo when the monster you are hunting is down on the ground, suitable for a punisher.

This combo allows you to utilize Wirebugs as you go in with a Jumping Slash and then end it with a True Charged Slash, doing a large amount of damage.

This combo utilizes the two Switch Skills for the Great Sword Adamant Charged Slash and Rage Slash. Since these provide knockback protection and Super Armor, respectively, this combo can tank even multi-hit monster attacks while dishing out tons of damage at the same time!

Tips on How to Use the Great Sword

Aim for the True Charged Slash 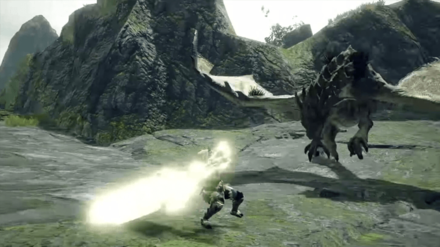 The Tackle is Back! 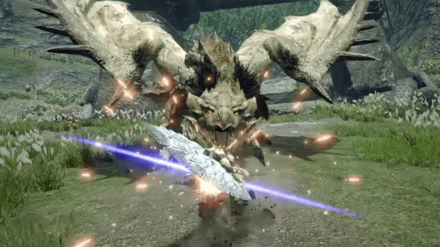 The Tackle from Monster Hunter World is back in Monster Hunter Rise! Use tackles to enter a Super Armor state and tank monster hits. Remember, tackles are also a viable bridge move to achieve True Charged Slash!

Use Wirebugs for Extra Mobility 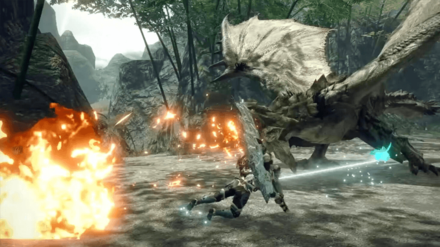 The Great Sword is very slow, but the introduction of Wirebugs in Monster Hunter Rise has made the Great Sword very mobile. Use Wire Dashes effectively for devastatingly great swordplay!

Use Power Sheath To Increase Your Attack!

When drawn out, the Great Sword slows down your hunter to a crawl which leaves you open to monster attacks. Always try to sheath your weapon when looking for an opening, as this allows you to sprint and better position yourself!

Also, with the introduction of the new Silkbind Attack Power Sheathe, it is a great idea to get used to sheathing your Great Swords!

The Great Sword has very slow attack animations, so beware of this whenever you try the hit-and-run style. Only try hitting the monster when there is an opening! 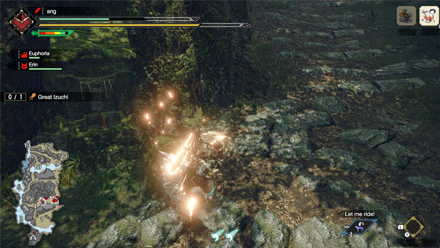 When fighting monsters, it's better to initiate the fight by mounting the Palamute, jumping then dismounting into a Full Charged Slash. This allows you to squeeze more damage than a draw attack.

The Hunting Edge Can Be Chained Into a Charged Slash

Charged Slashes are where most of the Great Sword's damage comes from. It can easily topple large monsters and if the monster is large enough, chaining the new Hunting Edge move can make for one of the deadliest combos in the game! 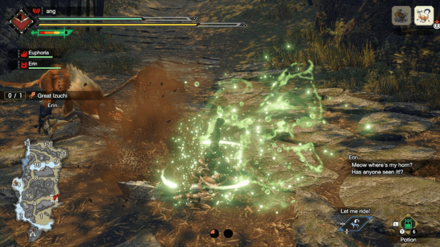 It hit... The Palico's healing bubble.

Hunting Edge's range can be hard to learn for players that are just starting to learn the biggest sword in the game. Trying to use it on small monsters will further increase its difficulty. If you wish to use Silkbind Attacks, it's better to use the Wirebug's mobility or Power Sheathe against smaller monsters instead.

Only Use Adamant Charged Slash On Weak Monster Moves

The Super Armor present at the start of a slash attack has been removed. Because of this, you can now be knocked back by tripping attacks from your allies using a Long Sword, Gunlance, or Bowguns.

There is a new possible way in MH Rise to connect a Strong Charged Slash and True Charged Slash. This combo is part of the Useful Combos so check that out!

While the Plunging Thrust can be performed after sliding in Monster Hunter World, a charged version of this can be done mid-air after hitting a monster with Hunting Edge.

In order for us to make the best articles possible, share your corrections, opinions, and thoughts about 「Sunbreak Great Sword Guide: Combos, Controls and Moveset | Monster Hunter Rise」 with us!