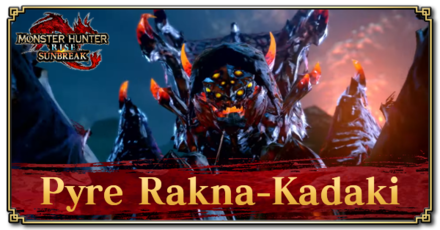 How to Unlock Pyre Rakna-Kadaki 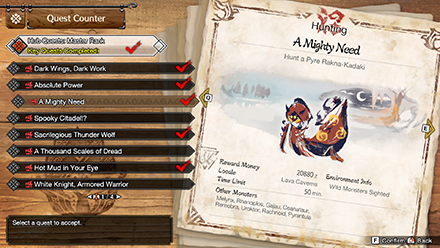 Pyre Rakna-Kadaki is unlocked by defeating Espinas in the M★4 Urgent Quest A Slumbering Jungle Espinas. 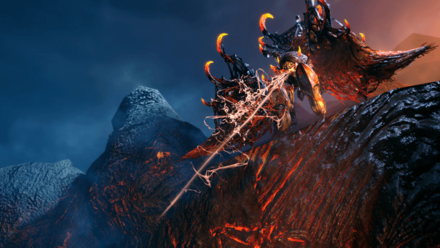 Pyre Rakna-Kadaki coordinate with the Pyrantula they scatter around. Ignoring these small fry will strengthen their explosive attacks, so slay any nearby Pyrantula they can spread around. Cotinued attacks cause them to lay eggs and stop coordinating with the tiny Temnocerans.

How to Beat Pyre Rakna-Kadaki

Like the normal Rakna-Kadaki, Pyre Rakna-Kadaki has two phases during the fight: Cowled and Big Abdomen.

Pyre Rakna-Kadaki will use its Pyrantulas more while cowled. It also uses more thread attacks while on this state.

While on Big Abdomen state, it becomes more aggressive and approaches the Hunter head on. Be careful!

Aim for The Legs While Cowled

Pyre Rakna-Kadaki will start the fight with dark threads cowled around its legs. Aim for these as they are easy to hit because they have a huge hitzone.

If you deal enough damage to these parts, Pyre Rakna-Kadaki will topple and transition to Big Abdomen state.

Aim for The Abdomen While It's Huge

After transitioning to the Big Abdomen state, all of its attacks will be focused on swinging its abdomen like a hammer. While it's in this state, hit the abdomen to deal maximum damage!

If you deal enough damage, Pyre Rakna-Kadaki will topple and transition back to Cowled state.

Focus on the Head After Toppling Down

While transitioning between cowled and big abdomen states, Pyre Rakna-Kadaki will topple and expose its head for a short time. This gives you a huge opening to dish out some free damage.

Use Cleansers to Clear the Webbed Status 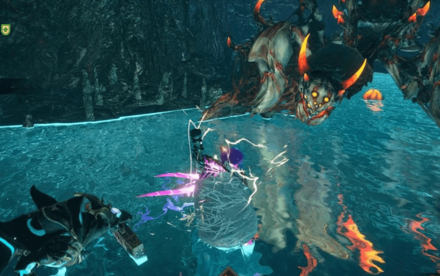 Like its cousin, Pyre Rakna-Kadaki also uses its threads to hold Hunters in place. To mitigate this, repeatedly smash any attack button or use Cleansers to quickly cure this ailment.

Cleanser: How to Get and Effects

Pyre Rakna-Kadaki will summon Pyrantulas tethered to it by threads, and then ignites them like a fuse. This deals huge damage and can effectively zone out Hunters.

Pyre Rakna-Kadaki weaponizes its large abdomen towards its foes. Anything caught in the way will feel its full force!

Pyre Rakna-Kadaki uses its long limbs to trip or damage unsuspecting Hunters. Careful not to get caught off guard!

Pyre Rakna-Kadaki boasts its control over flames and spews streams of fire from its mouth and body. Know how to deal with each one so you'll survive!

In order for us to make the best articles possible, share your corrections, opinions, and thoughts about 「Sunbreak Pyre Rakna-Kadaki: Weakness and Drops | Monster Hunter Rise」 with us!