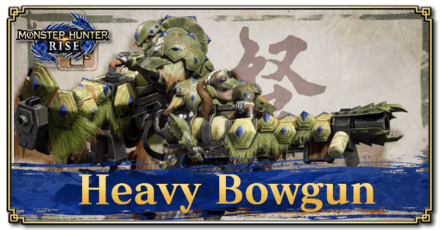 Using Setting Sun lets your Wirebug create a ring that increases the number of hits for ammo fired through it. This makes it especially useful for multi-hit ammo like Pierce Ammo, allowing you to rack up a lot of damage!

Firing intervals are shorter as shots are fired while crouching, but at the risk of overheating the weapon, which can't be used until it cools down.

To easily learn the bowgun, we highly suggest that the player adjust the camera settings first. We suggest changing the camera speed to fast to make the aiming way easier. If the player is not comfortable with this setup, we suggest switching back to default. 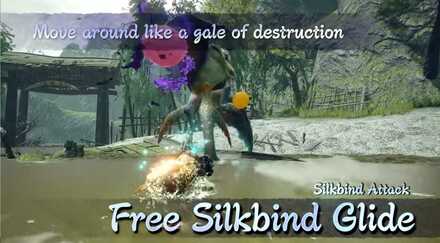 The Free Silkbind Glide is similar to a tactical slide. It helps close the gap between you and the monster. If you time it right, you can also hit a sneaky attack by the end of your glide. 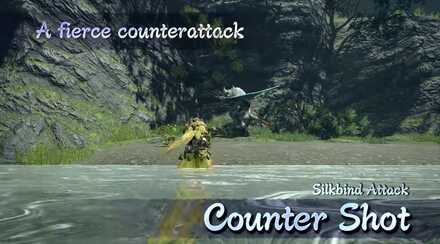 With Counter Shot, you plant yourself firmly on the ground with the wirebug and block incoming attacks. If you block an attack, you can quickly recover and do a counter shot.

This new Silkbind Attack can be switched out with Counter Shot.

A parry-specific move, Counter Charger can absorb an attack from a monster and nullify its damage. This also has the bonus effect of reducing the amount of time needed to fire a Charged Shot.

We suggest using this more than Melee Attack. As a Heavy Bowgunner, you don't need the Melee Attack because you are always far from the monster but having a Tackle ready for when a monster suddenly pounces on you is a great thing to have.

Though this sounds awesome, we still recommend using Counter Shot than Counter Charger. Unless your build revolves around the Charged Shots of the HBG, there is no reason to sacrifice the quick counter-attack capability of Counter Shot.

Heavy Bowgun is a DPS-heavy weapon so we don't recommend sacrificing damage for healing yourself. Wyvernsnipe and Wyvernheart Ammos are precious DPS tools for you to opt for decreasing its damage.

You can now do charge shots by holding zR. While charging, your Heavy Bowgun will glow like that in Hammer, Great Sword, and Bow charge attacks. Release at the right time for maximum damage! 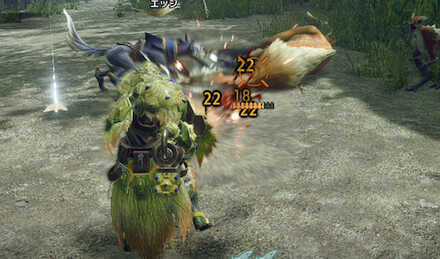 The Heavy Bowgun has a different mode that allows it to fire a special set of ammo. It has a long animation so only switch ammo when there are no enemies nearby or the monster is currently downed/unable to act.

Heavy Bowgun relies on the proper use of ammo types in certain situations. Knowing how to use them is half the work! Here is a quick guide on how each ammo works:

Using the Heavy Bowgun gives you the option to use Ammo that is unique to the HBG. Both ammo types are different from each other, which takes a bit of practice to use.

These Special Ammo types are also included with the HBG and differ from weapon to weapon. They can be used anytime but has cooldowns between uses.

The Wyvernheart is the closest you get to a hand-held minigun in the game. It has a charge meter but you can choose to use it even if it is not fully charged. Make sure to keep your rapid-fire on the target since straying off from the target decreases your damage but staying on point increases it.

True to its name, the Wyvernsnipe grants an HBG user the ability to pop shots that deal high amounts of damage. Once the shot connects, it hits a monster a few times before finally ending in a big explosion. 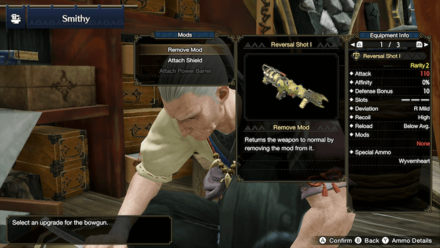 If you talk to Hamon the Blacksmith, he can offer you several ways to Mod your Heavy Bowgun. Just talk to him, choose Customize Bowgun, and choose the Bowgun you want to customize. The options are as follows:

When your Heavy Bowgun is equipped with the shield, you can automatically block attacks! If a monster is too quick for you to react, think about equipping a Shield mod for your Heavy Bowgun!

Use Mods Depending on Your Playstyle!

We recommend using mods depending on your playstyle. If you prefer to stay beside monsters and use Spread Shots, use the Shield mod because of auto-guard.

Tips on How to Use the Heavy Bowgun

Critical Range is achieved by positioning certain distance away from a monster. This is indicated by an orange reticle with an inner circle. Shots within Critical Range deal maximum damage and each ammo type has their own critical range thresholds.

Maintaining Critical Range is the key for efficient hunts with a Heavy Bowgun and maintaining it for as much as possible is paramount. You can check the Critical Ranges of all ammo types in the Training Area!

Use The Right Ammo Type for the Right Monster

Each of these ammo types correspond to a specific element and have very generous Critical Range thresholds. Check your Hunter's Notes to learn the elemental weaknesses of every monster!

Don't Forget to Use Status Ammo 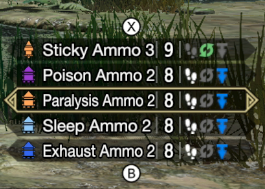 If your Heavy Bowgun can use Status Ammo, do not forget to use them. They may not have high firepower but they can create openings for you and your allies!

Use Special Ammo (Wyvernheart / Wyvernsnipe) When a Monster is Down 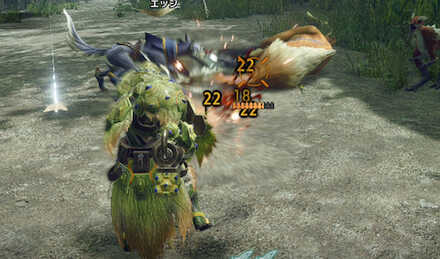 Using Wyvernheart and Wyvernsnipe when a monster is downed is ideal since using special ammo leaves you exposed to attacks.

Know the Behavior of Ammo in the Weapon Details 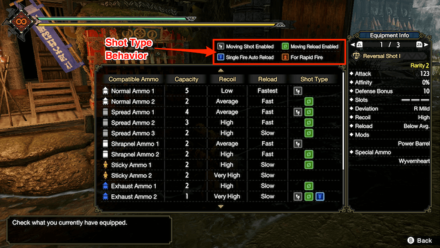 In Monster Hunter Rise, the shot type behavior of certain ammos changes per weapon. You can check these out in Equipment Info from the Start Menu then pressing Y to check the Ammo details. This will help you better understand how every ammo will behave based on your current Bowgun! 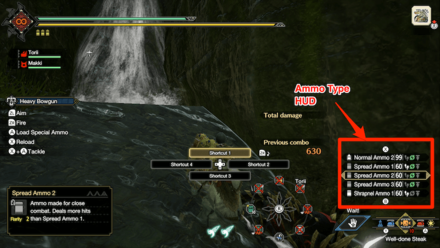 
▲ Can also be seen from the Ammo Type HUD 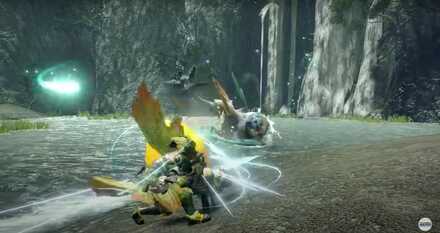 Evading while using a Heavy Bowgun is a slow feat, so it's best to invest in a Shield mod and some Guard or Guard Up. It's better to attempt a block than evade plus with the new counter silkbind attack Counter Shot / Counter Charger, you can give back whatever damage is done to you.

Take note that you can block shots with Counter Shot / Counter Charger without a shield mod as well.

How Good is the Heavy Bowgun?

Heavy Bowguns or the HBG can exert high amounts of firepower but with fairly low mobility. It is still the DPS powerhouse we know and love but with the Light Bowgun having access to previously HBG-exclusive Cluster Bomb ammo, Heavy Bowgun became a second choice. 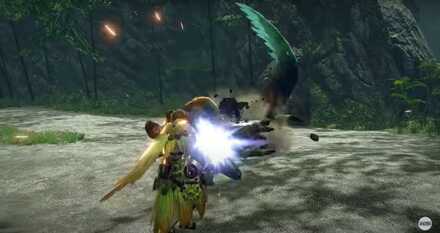 Loyal to its name, the Heavy Bowgun boasts high damage output per bullet and can punish, but at the cost of less mobility.

You can add a shield mod for your Heavy Bowgun. This allows your Heavy Bowgun to better block incoming attacks and reduce damage taken from them. Partner this with Guard and Guard Up for maximum survivability.

With the Heavy Bowgun being a powerhouse given the right build, it suffers from low mobility. As an HBG user, you are usually anchored to one spot and dish out damage. If a monster charges at you, it will take some time for you to sheathe the HBG and dodge - which usually gives the monster a clear shot at you.

The Heavy Bowgun and the Light Bowgun plays almost alike but with a few minor differences. If you are trying to decide on which one to try out, here are some comparisons that we observed:

Update 3.5 fixed a bug related to both the Light Bowgun and the Heavy Bowgun! Specifically this is about the Steadiness skill. Apparently, when Bowgun players used this skill, it didn't show up on the screens of the other players in the lobby.

You can also now reliably change ammo through the Radial Menu while riding your Palamute.

In Monster Hunter Rise (MH Rise), Heavy Bowguns can now charge their shots like Great Swords and Bows by holding down zR.

Post (2 Comments)
Opinions about an article or post go here.
Opinions about an article or post
We at Game8 thank you for your support.
In order for us to make the best articles possible, share your corrections, opinions, and thoughts about "Heavy Bowgun Guide: Combos, Controls and Moveset | Monster Hunter Rise" with us!
When reporting a problem, please be as specific as possible in providing details such as what conditions the problem occurred under and what kind of effects it had.