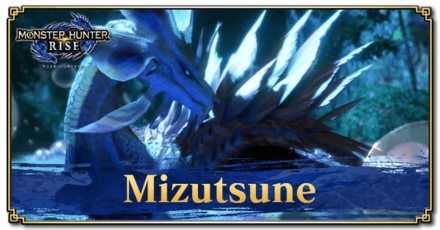 This is a hunting guide for Mizutsune, a Large Monster in Monster Hunter Rise (MH Rise) and the Sunbreak DLC. Read on to learn Mizutsune's weaknesses, forgeable weapons and armor, drops, and attack patterns for Master Rank! 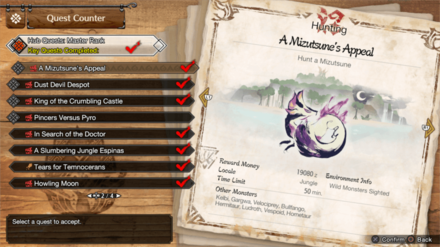 MR Mizutsune is unlocked by completing the Urgent Quest Ice Wolf, Red Moon and reaching M★4 in the Sunbreak expansion. 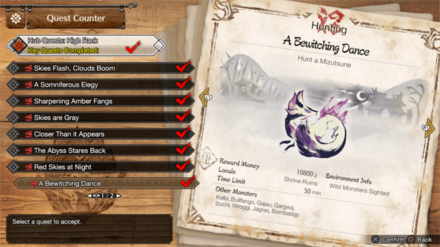 High Rank Mizutsune is unlocked by reaching HR 5 and completing five ★5 Key Hub Quests. This unlocks the Urgent Quest A Bewitching Dance, allowing you to face Mizutsune in the Shrine Ruins. 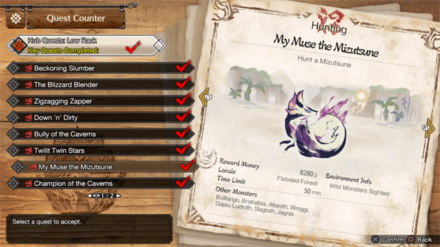 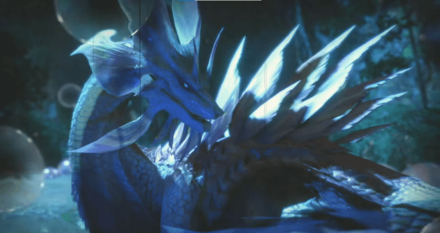 A Mizutsune slicks itself up to do a sliding attack, but its sliding also makes it susceptible to falling over, providing an opening for attack. If you're hit by its bubbles, you can scrub them off by running around and dodging furiously, or using a Cleanser. 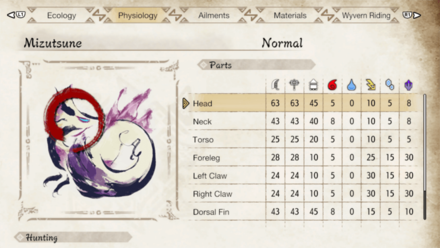 Mizutsune is most vulnerable to Thunder and Dragon. Bring weapons with these particular elements to take advantage of its weaknesses and make the fight less challenging.

Mizutsune can inflict Bubbleblight on hunters with its multiple bubble attacks. While the first stack of Bubbleblight can be beneficial as it increases your evasive capabilities, a second stack causes you to begin slipping and sliding when you move around, leaving you vulnerable to Mizutsune's attacks.

Cleansers can quickly remove Bubbleblight from the hunter, so don't forget to bring a stack with you whenever you decide to hunt a Mizutsune.

Mizutsune's primary weak point is its head, so prioritize dealing damage to it as often as possible. You can also break Mizutsune's head twice, increasing the chances of extra monster material drops after completing the hunt.

When not dealing damage to Mizutsune's head, staying near its sides makes it easier to react to and avoid most of its attacks, letting you spend more time dealing damage instead of dodging.

Mizutsune has an array of water breath attacks that sweep across a large area on the ground. We suggest using Wiredash to move out of these attacks' line of fire and close the distance with Mizutsune.

In addition to its attacks in Low and High Rank quests, Mizutsune uses the following attacks in Master Rank.

During the fight, Mizutsune will constantly spread bubbles of various colors around itself and the arena. Each of these bubbles inflict Bubbleblight on contact, but colored bubbles have unique effects when they make contact with the hunter.

During the fight, Mizutsune can execute multiple water breath attacks that reach very far and deal heavy damage on contact.

Mizutsune has an array of attacks it performs with its tail that cover a wide area and knock away the hunter on hit.

Mizutsune can perform multiple biting attacks throughout the fight. These attacks can come out quickly and catch careless hunters off guard, so stay alert when positioning near Mizutsune's mouth.

In order for us to make the best articles possible, share your corrections, opinions, and thoughts about 「Sunbreak Mizutsune: Weakness and Drops | Monster Hunter Rise」 with us!