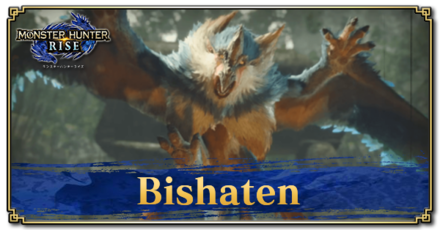 This is a hunting guide for Bishaten, a Large Monster in Monster Hunter Rise (MH Rise) and the Sunbreak DLC. Read on to learn Bishaten's weaknesses, forgeable weapons and armor, drops, and attack patterns for Master Rank!

Complete Scarlet Tengu in the Shrine Ruins in Master Rank 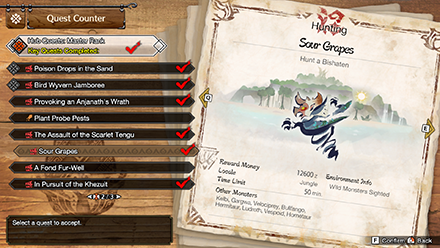 MR Bishaten is unlocked by completing the Urgent Quest Scarlet Tengu in the Shrine Ruins and reaching MR 2 in the Sunbreak expansion. 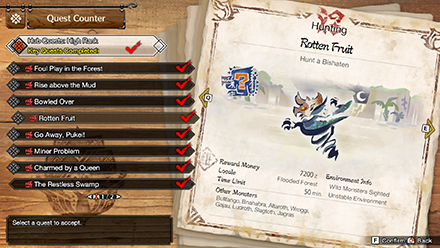 High Rank Bishaten is unlocked by completing the Urgent Quest The Restless Swamp and reaching HR 5. 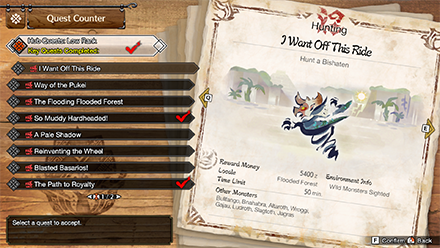 Low Rank Bishaten is the target of the ★3 Village Urgent Quest, Monkey Wrench in Your Plans. Alternatively, you can unlock it upon reaching HR 2 in the Gathering Hub. 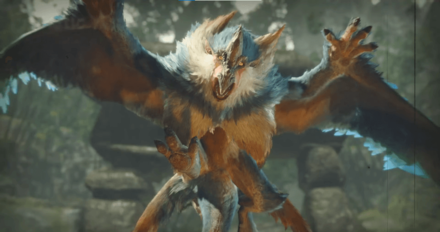 Its vaired tail attacks are incredibly powerful, and sometimes it spins around like a top, so avoiding damage can be tough. But if you use that chance to attack, the beast will drop its fruit and you can pick it up then throw it back. Watch its moves carefully to find your opening. 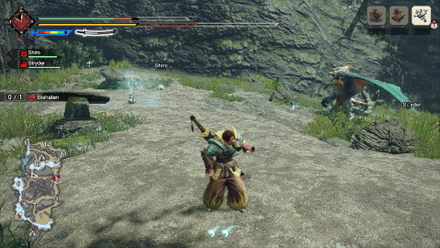 The Bishaten can cause poison with its fruits, so using Antidotes and Herbal Medicine is a must when fighting the Bishaten.

While you can't cut off the tail to completely debilitate it, attacking the tail causes the Bishaten to get knocked down or drop its fruits, both of which are incredibly useful.

Use Its Fruits Against It

Whenever you knock down a Bishaten by damaging its tail enough, you'll be able to pick up the fruits it drops and use them against the monster! It will usually drop Poisonfruit, and you'll need to hit it at least 3 times to poison it.

Bishaten has a fairly obvious tell for when it will try to stun you with the Flashfruit. Weapons with shields and counters can easily block this while others can use this opportunity to prepare their Wirebugs or panic dive to avoid getting stunned. Flashes also become a non-issue with Stun Resistance Lv 3, giving you a great opportunity to deal plenty of damage.

In addition to its attacks in Low and High Rank quests, Bishaten uses the following attacks in Master Rank.

The colored fruits that Bishaten can throw have different effects.

In order for us to make the best articles possible, share your corrections, opinions, and thoughts about 「Sunbreak Bishaten: Weakness and Drops | Monster Hunter Rise」 with us!