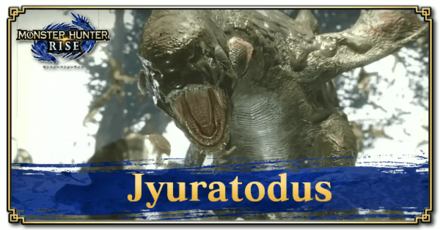 This is a hunting guide for Jyuratodus, a Large Monster in Monster Hunter Rise (MH Rise) and the Sunbreak DLC. Read on to learn Jyuratodus's weaknesses, forgeable weapons and armor, drops, and attack patterns for Master Rank! 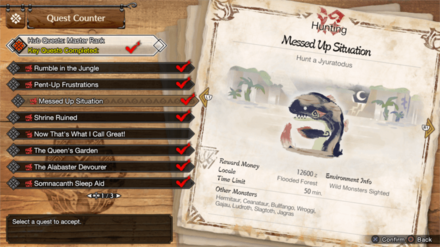 MR Jyuratodus is unlocked by reaching M★2 and completing the Urgent Quest Provoking an Anjanath's Wrath in the Sunbreak expansion. 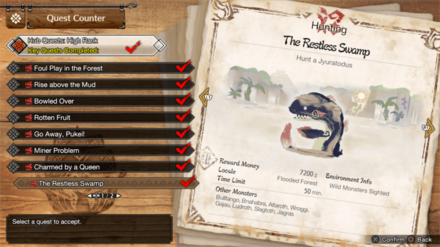 Jyuratodus is unlocked by reaching HR 4 and completing five ★4 Key Hub Quests. Doing this unlocks the Urgent Quest The Restless Swamp which allows you to face Jyuratodus in the Flooded Forest. 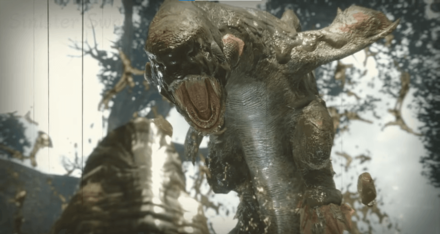 A Jyuratodus's mud-caked carapace is tough, so use water-elemental weapons to dissolve the mud and get to its squishy core. Stepping in its mud slows you down, so pay attention to your footing.

Jyuratodus' mud coat chips away through damage. Maintain the offensive throughout the fight to keep its parts exposed and make the fight easier!

Force It Out of Water

Attacking the head and dealing KO Damage while Jyuratodus is submerged can force it to pop out of the water so Hammer and Hunting Horn users should take note!

Jyuratodus' Mud Breach can be interrupted with a Sonic Bomb. This forces Jyuratodus to pop out of the water in a knocked-down state, allowing you to dish out heavy damage for free!

Use Meat Bait to Attract Giganha

Meat Bait can be used in Giganha-infested waters as a trap. This trap can deal decent damage and potentially stagger-lock Jyuratodus for the full duration.

Check your Supply Box within the base camp for free Meat Bait whenever you are in a Flooded Forest quest!

Keep in mind that this trap is timed, meaning it'll go off after two to three seconds regardless if Jyuratodus is in position or not. It is recommended that you use this trap during Jyuratodus' Mud Bath animation.

In addition to its attacks in High Rank quests, Jyuratodus uses the following attacks in Master Rank.

Jyuratodus will shoot mud at hunters either in a single shot or in three shots. Mud Shots will inflict Waterblight on hunters and create mud traps at the impact area so keep some Nulberries handy.

Jyuratodus submerges to prepare for a devastating attack. Similar to Diablos' burrow attack, the key to evading this attack lies in the bubbles that form above Jyuratodus' position.

Keep an eye on these bubbles at all times and track their movement. Once Jyuratodus does a quick pop from underwater, dodge out of the actual attack's way! Watch for mud shots that spreads around once it hits the ground.

This attack will launch you up in the air if it connects and can create a lot of mud traps in the immediate area.

Jyuratodus can use its massive tail to attack hunters from any angle around its body.

Jyuratodus can lunge out of the water to bite its target. This attack can have two patterns and is dependent on the distance between Jyuratodus and its target.

In order for us to make the best articles possible, share your corrections, opinions, and thoughts about 「Sunbreak Jyuratodus: Weakness and Drops | Monster Hunter Rise」 with us!