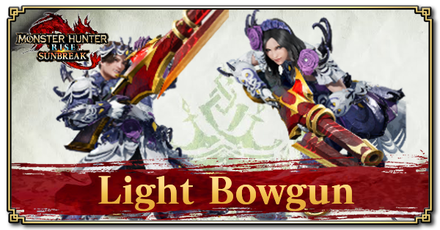 The nerf on Sticky Ammo as well as the increase in recoil on powerful ammos would definitely hit its damage performance compared to base Rise - but in a sense LBG is still pretty great to use.

This attack works as a retreating maneuver by firing a shot with massive recoil and using the Wirebug to stop the hunter from flying too far.

While this move doesn't deal a lot of damage, it gives the Light Bowgun more mobility to evade incoming attacks. It can even stop breath attacks if the explosion is timed right!

The Switch Skill narrows down the critical distance range and increases recoil. In exchange, some shots can deal more damage than usual! Note that this only applies to certain ammo types.

Based on the preview footage, it works with Normal Ammo and boosts the damage by around 30%.

Not introduced in any trailer, Mech Silkbind Shot is an additional Silkbind Attack added to the Sunbreak Expansion. This silkbind attack unleashes a flurry of shots that has increased partbreak and mounting damage. This is the Light Bowgun's version of Heavy Bowgun's crouching shot that enables the Hunter to let out bullets one after the other. Mech Silkbind Shot does not overheat tho, but it has a limited number of bullets.

How Good is the Light Bowgun?

The nerf on Sticky and Slicing ammo really hurt the Light Bowgun but the mobility options it got in Sunbreak lessened the blow. The new Critical Firepower switch skill are synergized well with the new silkbind attacks as it gives the Hunter options to create a gap whenever necessary.

However, the elemental damage meta we have today is proven effective to maximize the LBG's power, making it a top weapon in Sunbreak! 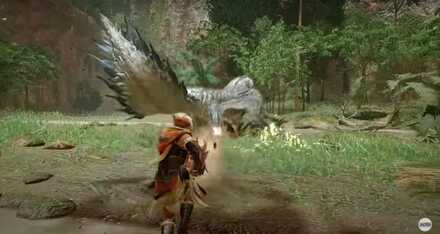 The Light Bowgun offers higher mobility compared to its heavier counterpart. You can essentially juggle tasks while firing without having to be stationary while doing so. 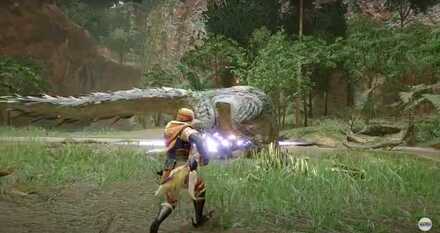 In some builds and instances, such as special upgrades, the Light Bowgun can rapidly fire its bullets at a target. One such build is the Sticky Ammo Rapid Fire build which has proven to be popular among Light Bowgun users. 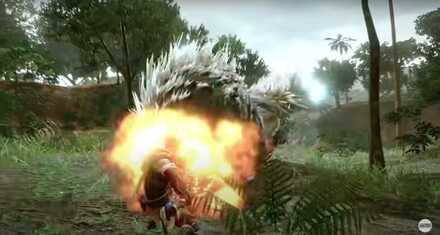 Similar to the Heavy Bowgun, the Light Bowgun has access to a wide range of ammo types which covers everything from damage to utility. That is why LBG users often play a support role in multiplayer, standing stationary and shooting different types of munitions like sleep or stun.

Perhaps to balance its mobility, you cannot guard against monster attacks with a Light Bowgun. You have to make do with being nimble and keeping your distance against monsters.

To easily learn the bowgun, we highly suggest that the player adjust the camera settings first. We suggest changing the camera speed to fast to make the aiming way easier. If the player is not comfortable with this setup, we suggest switching back to default.

The Silkbind Glide is similar to a combat slide. You can use this to close the distance between you and the enemy monster or to quickly move away. You can also fire off a powerful attack anytime while gliding or at the end of the glide. This attack boosts the damage of detonated Wyvernblasts and stops you mid-glide. It also uses one Wirebug and has medium Wirebug recovery speed.

The Fanning Vault is an excellent addition to the Light Bowgun's kit, giving it added mobility. It sends you flying high, allowing you to dodge incoming attacks and perform additional actions such as reloading or firing down a Wyvernblast while midair. This Silkbind Attack also uses one Wirebug and has fast recovery.

Possible Actions During a Fanning Vault

This technique can be switched out with Fanning Vault or Wyvern Counter. It requires one Wirebug and has fast recovery.

The user slides sideways in an arc with the Wirebug and can fire shots while in motion. This attack is very useful in maintaining critical distance while moving sideways!

This silkbind attack unleashes a flurry of shots that has increased partbreak and mounting damage. This is the Light Bowgun's version of Heavy Bowgun's crouching shot that enables the Hunter to let out bullets one after the other. Mech Silkbind Shot does not overheat tho, but it has a limited number of bullets.

With Sunbreak monsters terrorizing Hunters with their insane attack damage, it's great that Light Bowguns will have a new evasive silkbind in Wyvern Counter. Use this to create distance between you and the monster when you're in a pinch!

Elemental Reload is good and all, but we don't think the boost in elemental damage is worth it considering how much time you're losing to reloading. You won't be using elemental ammo most of the time anyway because other ammo types are better.

Unless you're using elemental LBG ammoin your build, don't use this.

This converts the usual roll dodge into a dash dodge. The distance covered is not that big but the recovery time between dodges are smaller so you can dodge all day. The attack power of the shot used immediately after evading is also boosted!

This is a Silkbind move that strafes you left or right depending on the direction. You can shoot while sliding and maintain distance from the monster. This is a great tool for repositioning yourself when in a pinch.

Increases damage in exchange for a narrower critical distance and more recoil, this move should be used when the monster is down. Being a gunner and all, you're susceptible to more damage. Be careful when you use this technique as it swaps with your normal shooting action.

This silkbind attack unleashes a flurry of shots that has increased partbreak and mounting damage. This is the Light Bowgun's version of Heavy Bowgun's crouching shot that enables the Hunter to let out bullets one after the other. Mech Silkbind Shot does not overheat tho, but it has a limited number of bullets.

With Sunbreak monsters terrorizing Hunters with their insane attack damage, it's great that Light Bowguns will have a new evasive silkbind in Wyvern Counter. Use this to create distance between you and the monster when you're in a pinch!

Light Bowguns have specific ammo support. Check your Light Bowgun's details to know if a certain ammo type is compatible. 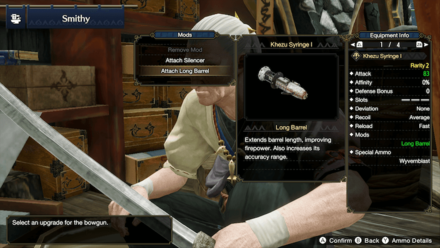 Use Mods Depending on Your Playstyle!

We recommend using mods depending on your playstyle. If you prefer using Sticky Ammo or recoil-heavy Pierce Ammo, use a Silencer mod because of the recoil reduction. For most ammo types, use the Long Barrel to slightly extend your range and boost your damage. 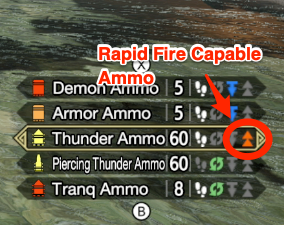 The Light Bowgun is capable of Rapid Firing shots or hitting multiple times per shot. Only ammo with the Rapid Fire Shot Type behavior can be fired rapidly, so take note of this! These vary per weapon so keep an eye out for weapons with the ammo you'd like to Rapid Fire if you enjoy using Rapid Fire LBGs!

You can execute a Slide Evade by tapping the B button or Space twice in succession. This is useful when you need to quickly distance yourself from the monster!

You can detonate Wyvernblasts by attacking or shooting them or by letting monsters hit them (like a trap). You can place up to 3 Wyvernblasts in a row. Each Wyvernblast refreshes in around a minute.

Tips on How to Use the Light Bowgun 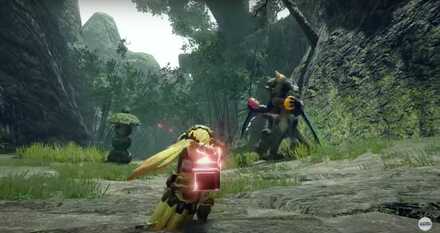 Like the Heavy Bowgun, maintaining critical distance is important for maximizing your damage output. The critical distance is indicated by an orange reticle with a red center. While maintaining a safe distance is good for survivability, you should only consider using Status, Slicing, and Sticky Ammo at this distance since most shots at this range will deal reduced damage and make your hunts take longer. Avoid going out of range as your shots will not hit the monster.

Know the Ammo Behavior in the Weapon Details 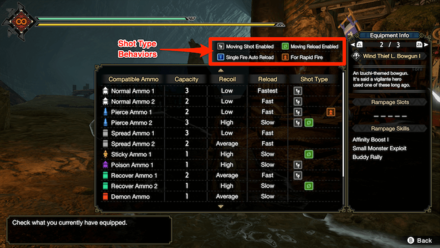 In Monster Hunter Rise, the shot type behavior of certain ammo changes per weapon. You can check these out in Equipment Info from the Start Menu (-) then press Y to check the Ammo details. This screen also displays the recoil and reload speed of each ammo in the weapon. This will help you better understand how each ammo behaves with your current Bowgun! 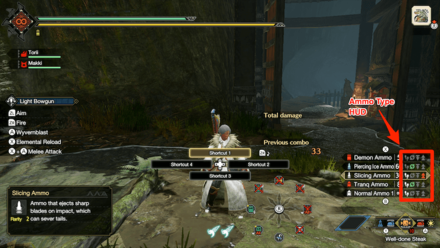 
▲ Can also be seen from the Ammo Type HUD

Don't Forget to Use Status Ammo

If your Bowgun supports status ammo, don't forget to use them. Though they won't deal massive damage, they can create openings that you and your allies can exploit!

Use the Proper Ammo Against Monsters

Depending on the monster's physiology and body frame, some ammo is more effective than others. Knowing which ammo to use per monster is a sign of a great Gunner. 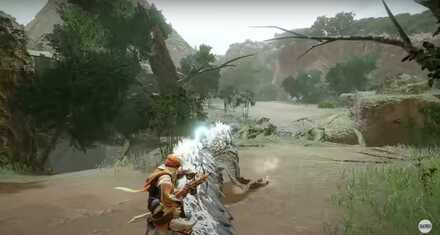 With Fanning Vault in your arsenal, dodging can be a bit easier. Since Light Bowgun users tend to take on fights at a distance, it is vital to maintain this distance. If the monster closes the gap, however, a Fanning Vault can help you reposition yourself and to a safer location. You can even place a Wyvernblast on the monster while in the air!

Use Wyvernblast When There is a Huge Opening 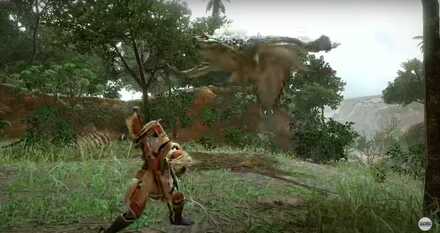 The Light Bowgun is unique for having the Wyverblast. When an enemy monster is staggering on the ground or asleep, place Wyverblasts next to them, then detonate them for extra damage.

Be Mindful of Wyvernblast's Cooldown

Wyvernblast is one of the most useful tools in a Light Bowgunner's arsenal so always try to use this effectively and be aware of its cooldown!

You'll know a Wyvernblast is on cooldown if the ammo head is missing and the case is blinking yellow. Wyvernblast has an estimated cooldown time of 1 minute per ammo.

The Heavy Bowgun and the Light Bowgun play similarly but with a few minor differences. If you are trying to decide on which one to try out, here are some comparisons that we observed:

Update 3.5 fixed a bug related to both the Light Bowgun and the Heavy Bowgun! Specifically, this was about the Steadiness skill. When Bowgun players used this skill, it didn't show up on the screens of the other players in the lobby.

You can also now reliably change ammo through the Radial Menu while riding your Palamute.

In order for us to make the best articles possible, share your corrections, opinions, and thoughts about 「Sunbreak Light Bowgun Guide: Combos, Controls and Moveset | Monster Hunter Rise」 with us!