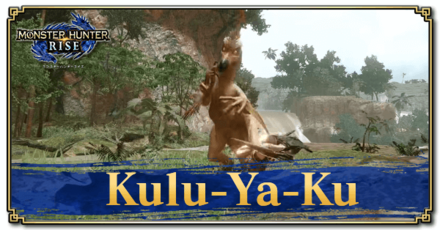 This is a hunting guide for Kulu-Ya-Ku, a Large Monster in Monster Hunter Rise (MH Rise) and the Sunbreak DLC. Read on to learn Kulu-Ya-Ku's weaknesses, forgeable weapons and armor, drops, and attack patterns for Master Rank! 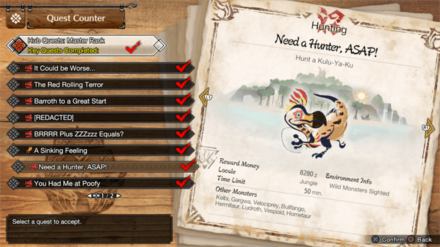 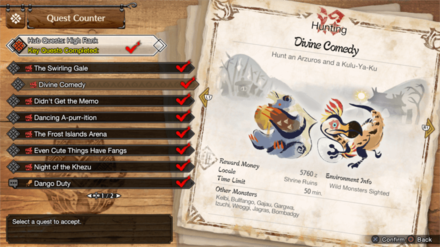 High Rank Kulu-Ya-Ku is unlocked by completing the Urgent Quest The Blue Apex and reaching HR 4. 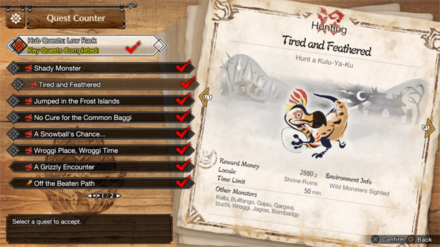 Low Rank Kulu-Ya-Ku is unlocked from the start at HR 1. 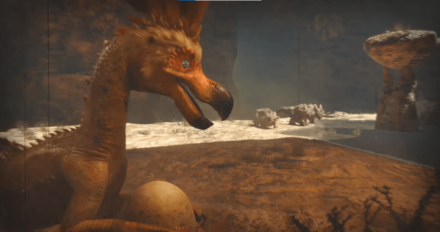 A Kulu-Ya-Ku uses small boulders to shield itself or smash against its enemies. Force it to drop whatever it's holding by staggering or blinding it, or if it's holding a cracked boulder, attack it to break it.

Kulu-Ya-Ku's primary weak point is its head, so prioritize dealing damage to it as often as possible, especially after stunning it or knocking it down.

Sticking near Kulu-Ya-Ku's sides makes it easier to react to and avoid most of its attacks, letting you spend more time dealing damage instead of dodging.

Destroy the Objects It Carries

When Kulu-Ya-Ku has an object in its hands, it can be difficult to hit its head as the item it carries gets in the way. In addition, Kulu-Ya-Ku also gains access to more moves while it carries something.

We suggest destroying the rocks and jars that Kulu-Ya-Ku picks up by repeatedly attacking them. While hitting the objects does minor damage, doing so will make the fight easier in the long run.

In addition, Kulu-Ya-Ku often leaves itself vulnerable after its object breaks, providing an opening for easy damage.

Staggering Kulu-Ya-Ku also has a chance to make it drop the item in its hands, making it another way to prevent it from using any object it carries.

In contrast to its Low and High Rank variants, Master Rank Kulu-Ya-Ku moves faster and is more accurate with its attacks. It also takes less time to recover after performing an attack.

Additionally, Kulu-Ya-Ku uses the following new attack in Master Rank on top of its moves from Low and High Rank quests.

Kulu-Ya-Ku often picks up rocks and jars from the ground to use as blunt weapons, slamming them on top of the hunter. These objects also act as a form of defense, as they often block attacks on Kulu-Ya-Ku's head.

In order for us to make the best articles possible, share your corrections, opinions, and thoughts about 「Sunbreak Kulu-Ya-Ku: Weakness and Drops | Monster Hunter Rise」 with us!