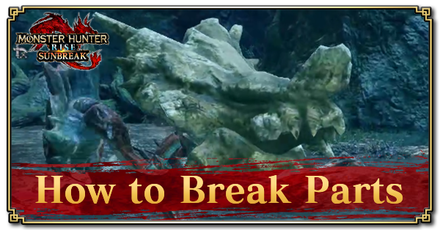 Breaking monster parts is a way of obtaining items for your weapons and armor in Monster Hunter Rise (MH Rise): Sunbreak. Read on to learn more about the mechanics of part breaking and how to break specific parts of monsters. 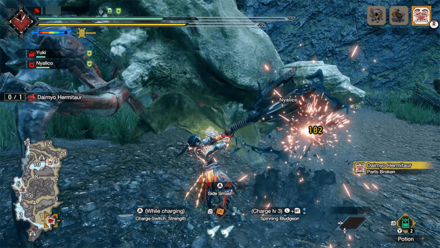 Each part has its own health which you must reduce to cause it to break. Some parts will only break once enough of a specific damage type has been dealt. Tails require severing damage to be cut while Barroth's scalp can only be broken off with blunt damage. Reaching the health threshold for parts that cannot be broken or are already broken will instead cause the monster to either flinch or topple.

You'll be able to see the damage done and hear a sound effect once one of the monster's parts breaks. A notification will also alert you that something has broken. 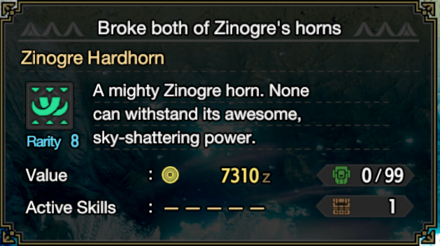 Monsters also have specific parts that give rewards when you break them. Some items like the Twisted Stouthorn can only be obtained this way. Some parts, like Diablos' and Zinogre's horns, must also be broken twice to receive the reward. 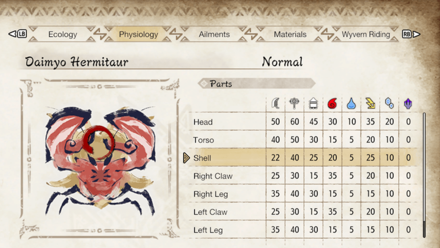 Some monsters have parts that take significantly more damage from one damage type over the others. For instance, blunt weapons are nearly twice as effective at breaking Daimyo Hermitaur's shell compared to severing weapons.

While not necessary, exploiting elemental weaknesses can also help bring down the part's health, especially if you're not using an optimal damage type.

You'll be able to find these values on our individual monster pages or from the monster's Physiology tab in-game. 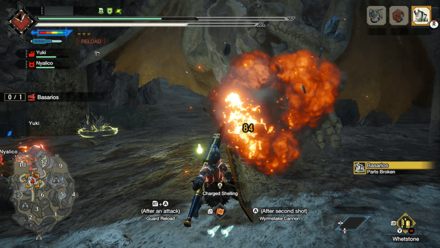 Some parts, like Daimyo Hermitaur's claws or most of Basarios, have fairly low hitzone values no matter the damage type. For cases like these, dealing fixed damage to work around their toughness is effective since it ignores their defense. Fixed damage comes from Mega Barrel Bombs, Gunlance shelling, and Blast damage. 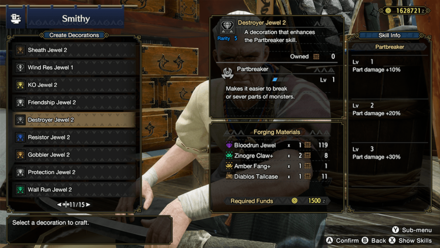 Since breaking a part is essentially just dealing damage to it repeatedly, damage-enhancing skills like Attack Boost are generally good choices. If the part you're after is also a weakpoint, Weakness Exploit is recommended to quickly break it.

For harder monster parts with low hitzone values, you'll want Mind's Eye to both prevent bouncing and increase the damage dealt to the part.

While not recommended for hunts in general, Partbreaker can still be a useful skill to have when you're after a part that you can't seem to damage enough. Partbreaker can deal up to 30% bonus damage on parts but will not reflect on the monster's total health.

In order for us to make the best articles possible, share your corrections, opinions, and thoughts about 「Sunbreak | How to Break Monster Parts | Monster Hunter Rise」 with us!