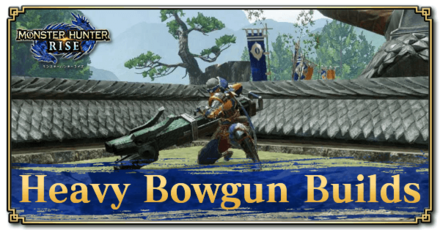 The Spread and Slashing Build we've recommended at the start of the HR 8 to 40 climb maintains its place at the current endgame of Monster Hunter Rise. This build revolves around Spread Ammo 3 but improves crit damage from hitting weakpoints as well via Weakness Exploit and Critical Boost.

Araknamortar retains the top spot among Piercing HBGs due to its great stats across the board. While it can be argued that Daora Grande can achieve the same affinity rating with its Kushala Soul ramp up skill and has significantly more attack, Araknamortar's superior slots and handling can easily aid HBG builds in closing the gap in terms of overall performance.

This build pretty much maintains most of the skills we've had from our previous Piercing HBG build while adding Critical Boost and Weakness Exploit into the mix. This change allows us to reach 90% affinity on weak spots, further enhancing the effectiveness of our Pierce and Slicing Ammo.

Rampage H. Bowgun S edges out Teostra's Flames as the best Sticky HBG in Monster Hunter Rise due to modular nature. When modded properly, this Heavy Bowgun can reach 266 attack with a power barrel alone!

With our new Sticky HBG in mind, this straightforward build improves Rampage H. Bowgun S' general performance and explosive arsenal! Sticky and Cluster Bomb damage is improved through Attack Boost and Artillery. KO damage is bolstered through Slugger which is extremely useful for multiplayer scaling.

Meteor Cannon maintains its place on the totem pole of Sticky Ammo HBGs pre-HR100. While it falls short of the Tigrex Howl II's base attack rating, Meteor Cannon has 1 more round in its Sticky Ammo capacity.

This seemingly minor difference is actually an important one because having three rounds of Sticky Ammo per magazine allows you to fire your explosive salvos at a more consistent rate and better flow than if you had only two.

Similar to our Spread and Slashing Build above, our Sticky Ammo Build's armor pieces and decorations remain unchanged at HR 40+. This build essentially turns the Meteor Cannon into a ranged Hammer by improving the effectiveness of Sticky Ammo 2 and 3.

Continuing with the Rakna-Kadaki Tree, Araknamortar is a direct upgrade to Fulgent Shot II — Solidfying the tree's place as the best piercing HBGs in Monster Hunter Rise right now.

Once again, our Pierce and Slashing Ammo build at the start of HR 8 to 40 remains the same at HR 40+. This build primarily maximizes Pierce Ammo 3's damage through Pierce Up and Partbreaker. Wirebug Whisperer Lv. 3 is also added for improved survivability mobility during hunts.

Rakna-Kadaki's Fulgent Shot II offers an insane 40% affinity rating and surprisingly manageable recoil and reload speeds for all of its Pierce Ammo.

This Heavy Bowgun also has Slicing Ammo, allowing you to sever tails!

Built around Pierce Ammo 3, Slicing Ammo, and Fulgent Shot II, this build maximizes damage via Attack Boost, Partbreaker, and Pierce Up. The Heavy Bowgun's general performance is improved via Recoil Down and Reload Speed.

Lastly, Lv. 3 Wirebug Whisperer is added to improve Counter Shot and Silk Dash usage. You can even opt for a Power Barrel instead of the standard Shield Mod due to the significant increase in survivability and mobility provided by this particular skill.

Built around Spread Ammo 3, Slicing Ammo, and Sinister Dreadvolley, DPS is improved Spread Up and Spare Shot. General HBG performance is improved through Reload Speed and Recoil Down as usual while Ballistics is added to increase the critical distance of Spread Ammo 3.

Wirebug Whisperer is once again added to improve the usage rate of Counter Shot and Silk Dashes during hunts, allowing you to maneuver around attacks or block them without using a Shield Mod at a more consistent and reliable rate.

Those with a penchant for explosions can opt for the Meteor Cannon. This Heavy Bowgun offers 200 attack rating and great clip sizes for Sticky Ammo 2 and 3, making it the perfect partner for our recommended Sticky Ammo Build below!

Built around Sticky Ammo 3 and the Meteor Cannon, this build essentially turns your Heavy Bowgun into a ranged Hammer. Damage is increased through Attack Boost and Artillery. Spare Shot offers much needed improvements to ammo economy, allowing you fire additional Sticky Ammo 2 or 3 for free!

Like all of our builds, general HBG performance is improved via Recoil Down and Reload Speed. Lv. 3 Wirebug Whisperer is once again added to improve Counter Shot and Silk Dash usage, allowing you to opt for a Power Barrel for more damage instead of the standard Shield Mod.

Nargacuga's Baleful Night offers great stats and good magazine sizes for its ammo types, in addition to manageable recoil and reload speeds. These factors make it a great choice to reach the very end of 7★ Hub Quests with!

A damage-oriented build utilizing the affinity from the Narga Heavy Bowgun for the critical hits. It also makes use of Pierce Up and Critical Boost to improve overall damage. Guard 2 is slotted for the aggressive monsters so you can block their attacks (Requires Shield Mod).

Gale Crossbow offers a good variety of ammo types and great stats across the board, making it the perfect starting Heavy Bowgun in High Rank.

An affinity pierce build that's enough to get you through the early stages of Rise's high rank. You get a flat 40% affinity from this build (50 with a Critical Eye Talisman) which can allow you to dish out decent amounts of damage with ease.

The Hidden Gambit is a must-have for those who prefer to use Pierce Ammo. Its 30% affinity rating grants much-needed damage at this stage of the game.

This Heavy Bowgun also has Slicing Ammo, allowing its user to sever tails.

Sinister Volley I offers good magazine sizes for Normal, Pierce, Spread, and Sharpnel Ammo at the cost of heavy recoil. Its stats across the board are amazing as well, making it an efficient all-purpose weapon in the mid game.

It is important to note that this Heavy Bowgun also has Slicing Ammo.

This set focuses on minimizing recoil via Recoil Down while adding an extra layer of protection and mobility through Evade Extender as well.

Wind Thief Crossbow II is an excellent weapon in the early stages of the game because of its Piercing Ammo and Slicing Ammo — The latter of which can be used to sever monster tails.

Reversal Shot I caters to those who prefer to use Spread Ammo. This particular Heavy Bowgun also has two levels of Sticky Ammo, which can be used to knock monsters down when shot near the head.

Bowguns in general are some of the most skill-hungry weapons in the game and there are not a lot of viable armor options in the early stages of Monster Hunter Rise.

With this in mind, we recommend this set which prioritizes mitigating as much recoil as possible, mixed with a few offensive skills.

Register as a member and get all the information you want. (It's free!)
Login
Opinions about an article or post go here.
Opinions about an article or post
We at Game8 thank you for your support.
In order for us to make the best articles possible, share your corrections, opinions, and thoughts about "Heavy Bowgun Builds and Best Equipment | Monster Hunter Rise" with us!
When reporting a problem, please be as specific as possible in providing details such as what conditions the problem occurred under and what kind of effects it had.