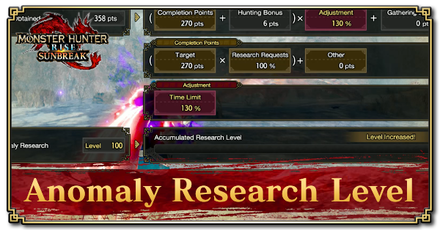 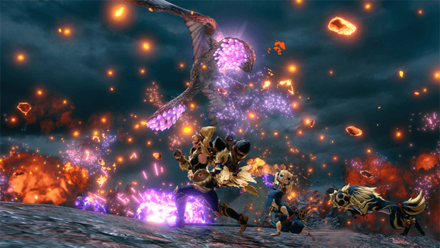 With the addition of new A7★ monsters, we suggest taking on afflicted Seething Bazelgeuse as soon as you reach Level 121 thanks to its large base reward of 500 points. It is very weak to Ice so the prior Egil Bowgun Build against Diablos in Level 51+ still works.

While you can starting farming this monster at Level 91, we still recommend doing afflicted Diablos and Seething Bazelgeuse together below Level 121 to maximize the bonus research points at those levels. 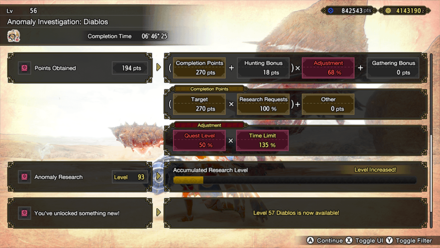 Reaching Level 51 will allow you to take on Anomaly Investigations with an afflicted Diablos. It can be gunned down in around 3-6 minutes with a Heavy Bowgun using Piercing Ice Ammo and should allow you to gather plenty of Prime Amber Essences quickly as well.

As Diablos is an A5★ monster, its quests give a base of 380 pts before adjustments. For more points, try to do quests with another monster weak to Ice such as Seething Bazelgeuse and use Join Requests.

Hunt Daimyo Hermitaur for Anomaly Investigations Level 50 and Below 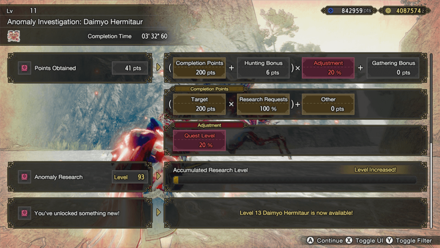 Daimyo Hermitaur can be taken down in roughly 3-5 minutes using a Light Bowgun with Piercing Thunder Ammo. We also recommend hunting this monster since it is a great source for Afflicted Dragon Blood starting at Level 31 to expand your weapon's Anomaly slots. As Daimyo Hermitaur is an A2★ monster, its quests give a base of 220 pts before adjustments. 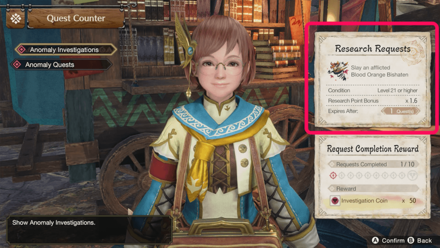 Bahari will give Research Requests that you can complete to gain bonus completion points. The requested monster is entirely random and the level will usually be around your current progress when you receive it. The following table shows the number of points you can expect to earn by completing these requests.

Take Advantage of Multipliers When Farming 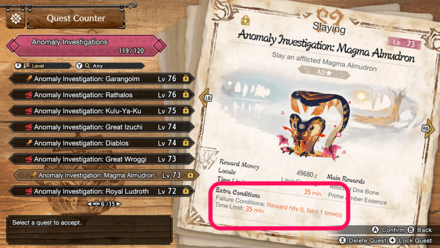 Anomaly Investigations sometimes have special conditions that affect the final number of points you receive after the quest. In general, if a modification to the quest makes it easier, you'll receive fewer points, while stricter conditions reward bonus points. These adjustments or multipliers stack with the Research Request and each other.

Try to avoid taking on quests with a less than 100% adjustment to avoid getting fewer points and finish investigations within 20 levels of your current level.

If you're farming for Afflicted Materials, try to go on Anomaly Investigations with bigger multipliers to maximize your gains. 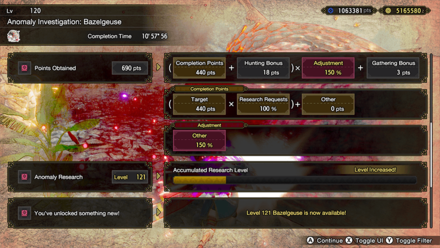 As of Sunbreak Version 13, hunters between levels 1 and 120 will gain a 150% adjustment after every successful investigation. 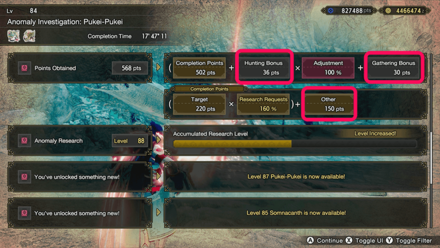 Several other factors can affect the number of points your earn after each investigation. These include fixed point bonuses and multipliers depending on the quest's difficulty. Try to maximize all of these when you're doing investigations!

Breaking monster parts give 6 points per part broken during the investigation. This is affected by the final multiplier. Harvesting from afflicted gathering points gives 3 points each. While this seems small, these can add up, especially if you're doing several quests in a row and harvest on the way to the monster.

You'll sometimes receive investigations with multiple target monsters. These can be good if you can use the multipliers to your advantage. Each additional target monster provides different points depending on its rank. This usually is half the points of their afflicted versions (ex. Afflicted Diablos rewards 380 pts, so regular Diablos gives 190 pts). Monsters without afflicted versions have their own point values, which can be found in the table below.

How to Check Your Anomaly Research Level 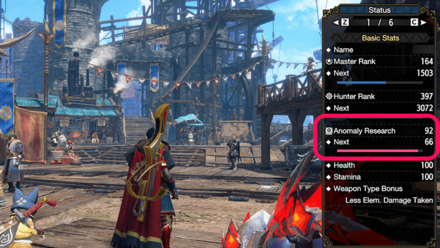 You can check your current Anomaly Research Level and the points needed to progress it from the Status screen. Note that the amount of points required to increase it depends on your current level. Starting Level 81, the requirement becomes around 1,000 points for the next level and only goes higher from there. 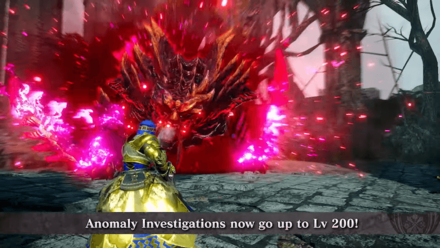 As of the third title update for Sunbreak, the maximum Anomaly Research Level is 200. This was raised from 120 from the last title update and 100 when the system was introduced. There is a possibility that this cap will be unlocked in future title updates. 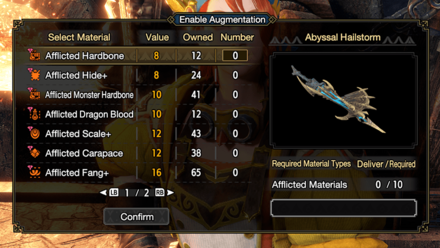 Afflicted Materials: How to Get and Uses 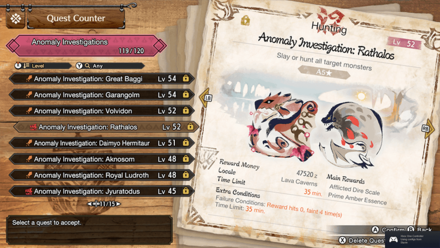 Starting Research Level 51, you may start joining Anomaly Investigations that feature A5★ Afflicted Monsters. You can randomly receive them by doing other investigations, or you can use the Join Requests feature to look for your target monster.

Starting Research Level 71, you may receive investigations with A6★ Afflicted Monsters. Like with the A5★ monsters, you can use Join Requests to look for your target monster even if you don't have their investigations.

A5★ Anomaly Quests Unlocked at Level 81 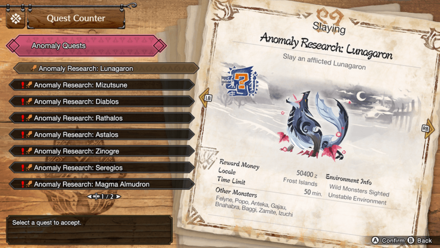 Upon reaching Research Level 81, talk to Bahari to unlock all the A5★ afflicted monsters for Anomaly Quests.

A7★ Afflicted Monsters Unlock at Level 91

If you're having an itch to hunt the new A7★ monsters the soonest, the ability to fight them via Join Requests will unlock as soon as you hit Research Level 91.

Even higher-grade Afflicted Materials will appear as quest rewards for Anomaly Investigations Level 101 onward. As with Tier 2 materials, lower-tier versions will still appear as rewards sometimes. These higher grade materials are used for new Decorations and have higher value when used for Qurious Crafting.

Afflicted Materials: How to Get and Uses

A6★ Anomaly Quests Unlocked at Level 111 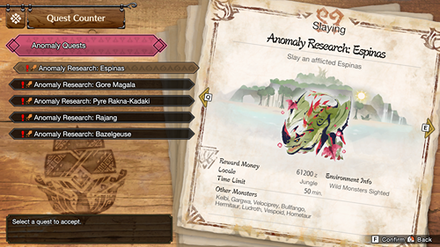 Upon reaching Research Level 111, talk to Bahari to unlock all the A6★ afflicted monsters for Anomaly Quests. Minayle will also give you the option to create the Bloody Jewel 2 Rampage Decoration.

Bloody Jewel 2:
Decoration Effect and How to Craft 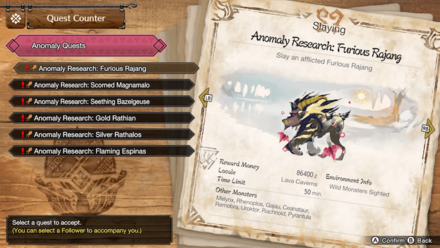 A7★ Quests are unlocked once you reach Anomaly Research Lv 181. Simply talk to Bahari the Scientist after the quest that leveled you up to 181. Chichae should have the quests available for you afterwards!

In order for us to make the best articles possible, share your corrections, opinions, and thoughts about 「Anomaly Research Level: How to Get Max Level Fast | Monster Hunter Rise: Sunbreak」 with us!