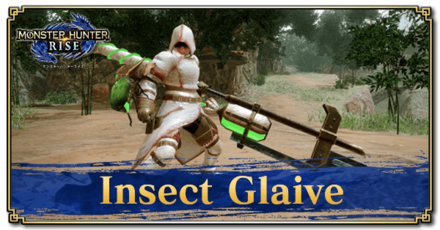 This is a guide to the Insect Glaive, a weapon in Monster Hunter Rise (MH Rise). Read on to learn about new Insect Glaive controls and combos, how to use Insect Glaive's Descending Thrust, the best Kinsect to use as well as details on Insect Glaive Switch Skills. 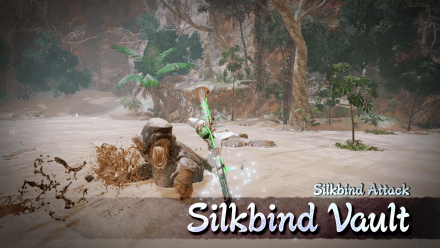 Silkbind Vault is a Silkbind Attack, where you can jump forward and upward midair, making you gain more air time. This move can be comboed into a variety of attacks, making it a highly useful lead. 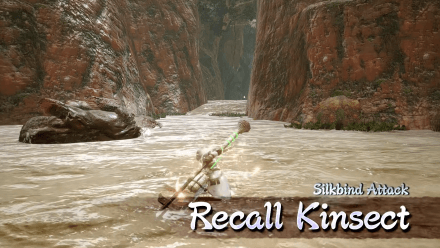 Recall Kinsect is a Silkbind Attack where you can recall your Kinsect while simultaneously avoiding attacks from opponents. Players can also recall their Kinsect midair, whereas you would normally have to be on the ground to do it. While moving, the Kinsect will also execute spinning attacks. When your Kinsect returns to you, you will get healed and your Kinsect's stamina will be fully restored.

This new Descending Thrust -like silkbind attack for the Insect Glaive stabs the monster from above! It can be switched out for Recall Kinsect.

The radius of the attack is small but will deal heavy damage to the site of the collision.

Replaces your usual drawing attack with a dash spinning move that can counter attacks. Any attack met while dashing will propel you to the air, giving the Insect Glaive a much-needed boost. This takes a lot of getting used to because the counterattack opportunity is only present while dashing.

If you're using Powder Kinsects then you're going to love this. This is a multi-hit attack that marks the enemy for Kinsects to target. Tornado Slash is your high damage move but this one has almost the same value but it does it with multiple hits - definitely better if you're running an elemental or status Insect Glaive.

The Diving Wyvern unlocks a diving move while airborne that deals significant damage. Pin-point accuracy is needed though because the radius of the hit is very small.

Once you unlock this, we recommend replacing Recall Kinsect. The health regeneration and Kinect stamina refresh are great and all but DPS is still king in MH Rise! 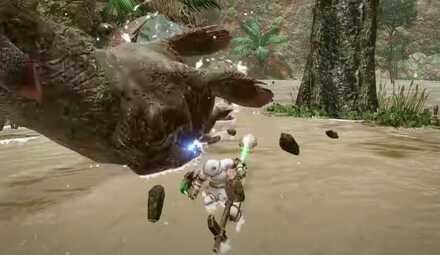 In Monster Hunter Rise (MH Rise), each extract has their own individual effects and green extract is also removed from the game. Check out the extract effects below! 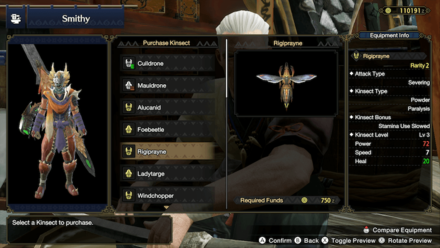 Kinsects have changed in Monster Hunter Rise (MHRise) with Kinsects being highly dependent on the player's choice.

Different Kinsect types can be purchased from the Smithy in Steelworks or the Hub Prep Area, each with its unique stats, type, and bonuses. Check those out if you're looking for Kinsects to use!


These are bonuses obtained by the team during their playthrough. If there are more Kinsects we need to investigate, let us know in the comments!

If you are looking for great Kinsects to use, we recommend using the Monarch Alucanid. It has the Kinsect Bonus Dual Color (Attack) which enables the Kinsect to automatically harvest red extracts anywhere on the monster. Red extracts are arguably the hardest extract to get because they are mostly situated at the monster's most dangerous body parts - using this can make red extract harvesting a breeze!

You can buy this from the Smithy (Steelworks or Hub Prep Area) for 4500z.

Recommended Combos for the Insect Glaive

This combo utilizes the three awesome Switch Skill of the Insect Glaive. First, you close the gap using Advancing Roundslash then press A (Right Click) until it executes a Tetraseal Slash. Finally, we finish off the combo with a Diving Wyvern.

Do not be afraid of using this while the monster is attacking because Advancing Roundslash will automatically propel you upwards if met by an attack!

We recommended this combo whenever the monster cannot move. Make sure you have all three extracts collected, then perform a Leaping Slash (L + A or WASD + Right Click). Since Leaping Slash has a long downtime after, you can cancel this just by Harvesting Extract (zR + X or MB4 + Left Click).

This is our recommended combo when you're in midair. From vaulting, combining Midair Evade, Recall Kinsect, and Jumping Advancing Slash, your airtime becomes longer. This allows you to set up for the big damage move, Aerial Attack.

This is a combo that allows you to evade midair then immediately attack using Recall Kinsect. Evading gives you a bit of an invulnerability window, so you can avoid monster attacks. By avoiding Recall Kinsect, you can do an aerial combo.

Tips on How to Use the Insect Glaive 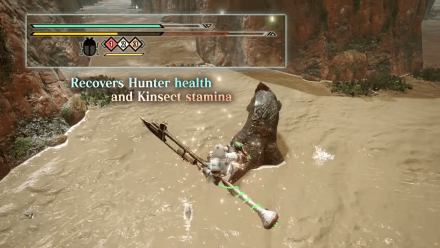 Try to collect extracts before you start seriously fighting the monster. The red extract is particularly important; the Insect Glaive has two different movesets for those with and without the red extract. Keep an eye out for when your extracts expire and make sure you maintain them.

Learn and Use Kinsect Cancel

This handy tip allows you to basically cancel any lengthy downtime animation frames like the Insect Glaive's Tornado Slash. To do this, simply alternate between Kinsect: Harvest Extract (zR + X or MB4 + Left Click) and Kinsect: Recall (zR + A or MB4 + Right Click) after the attack!

When used with a Charged Chain Attack Kinsect, this can max out your DPS!

Use Aerial Attacks to Aim For Out-of-Reach Weakspots 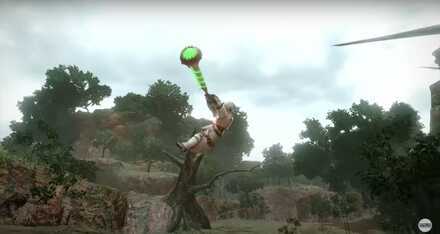 The Insect Glaive is capable of great leaps to reach high locations and attack from the air. It provides the advantage of allowing players to attack weak spots which would be difficult to reach with other melee weapons. You can even finish it with the Switch Skill Diving Wyvern which stabs your Insect Glaive downwards like the Descending Thrust!

Insect Glaive users can direct their Kinsect to trigger things in the environment like Flashflies so make sure to keep an eye out for these. 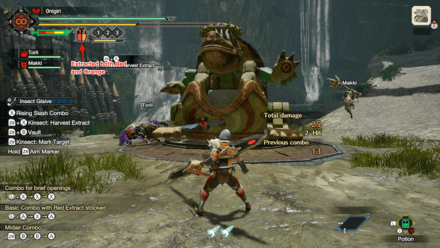 The red extract is arguably the most important and hard to get extract for Insect Glaive users. Not only does it increase your attack, but it also unlocks a plethora of new combos you can use.

Therefore, we recommend getting a Kinsect with Dual Color (Attack) Kinsect Bonus. This allows you to extract a red extract together with the extract that the body part produces. This is a great way to get red extract considering most of them can be extracted from the head.

Fight on the Ground, Less in the Air 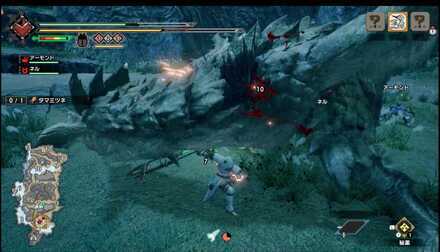 After collecting all three extracts, we recommend fighting on the ground. It is quite tempting to fight airborne considering Insect Glaive is known for its superior airborne prowess but the motion value for airborne attacks is way less than on the ground. Do not waste your extract up time!

How Good is the Insect Glaive?

The Insect Glaive is one of the DPS weapons in Monster Hunter Rise. With mounting replaced by Wyvern Riding, Insect Glaive can Wyvern Ride monsters with ease and use monsters to their advantage! The addition of Dual Color (Attack) Kinsects also boosts the Insect Glaive's efficiency because you can get two extracts in one go! 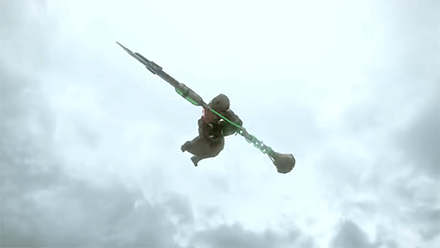 The Insect Glaive offers the most mobility out of all the weapons in Monster Hunter. You can attack midair and keep attacking if you do the correct moves. 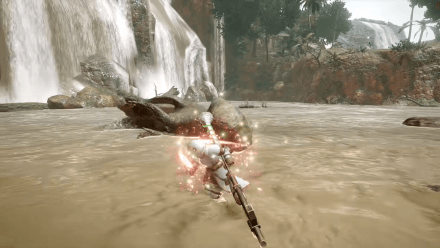 The Kinsect can get different extracts from various parts of a monster, giving the Insect Glaive user several buffs to their attack power, speed, and defense.

Being mostly airborne, Insect Glaive users are the best at triggering Wyvern Riding.

This is not true at all! If all, Insect Glaive is buffed in MH Rise considering the new Dual Color capability of the Kinsects! The Descending Thrust move that most people feared to be gone is now discovered to be present in the Switch Skill Diving Wyvern. Do not be afraid, Insect Glaive is here to stay!

The Insect Glaive is much weaker if you don't make use of the buffs. You will suffer from less attack speed, less attack power, less vault distance, and less defense. These buffs do not last for a long time either so keep an eye out for when they are blinking (near expiration)! 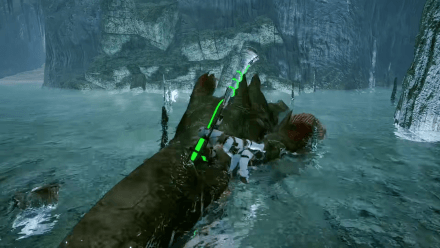 With the Insect Glaive's fast attack speed, you will find yourself losing sharpness quicker than most weapons. Keep an eye out for skills that manages sharpness like Master's Touch or Razor Sharp. 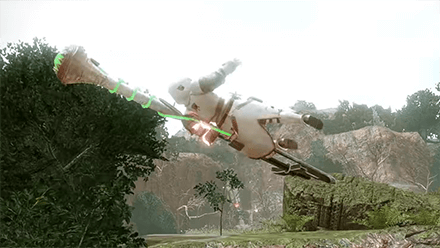 Insect Glaive users will have to time their dodges precisely and take advantage of their aerial abilities because the Insect Glaive cannot guard.

Descending Thrust is now in the Switch Skill Diving Wyvern

When you unlock the Switch Skill Diving Wyvern, you can see a Descending Thrust -like attack from Monster Hunter World (MHW). If your gameplay revolves around this, feel better because it's back in MH Rise!

If you're used to hitting the bottom-left shoulder button in directing the Kinsect, that's gonna change in MH Rise. zL is now reserved for activating Silkbind Attacks so they moved the Kinsect Control button to the other side, zR.

White extracts in MH Rise do not provide jump buff anymore. Instead, they increased the general raw jumping power of the hunter.

You can no longer get a green extract from monsters in Monster Hunter Rise (MH Rise). The only way you can get healing from Kinsects is by using one with the ''Bonus Heal''.

Getting All Three Extracts Provide Earplugs and Flinch Free

When you get all three extracts from the monster, your hunter will now have Earplugs and max Flinch Free - very useful when going full ham even when against roars!

Register as a member and get all the information you want. (It's free!)
Login
Opinions about an article or post go here.
Opinions about an article or post
We at Game8 thank you for your support.
In order for us to make the best articles possible, share your corrections, opinions, and thoughts about "Insect Glaive Guide: Combos, Controls and Moveset | Monster Hunter Rise" with us!
When reporting a problem, please be as specific as possible in providing details such as what conditions the problem occurred under and what kind of effects it had.