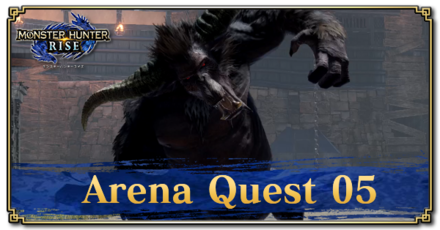 This is a comprehensive guide on the Arena Quest 05 found in Monster Hunter Rise (MH Rise). Read on for a guide on how to beat Rajang in the Arena, how to get S Rank, armor and weapon loadouts, and more! 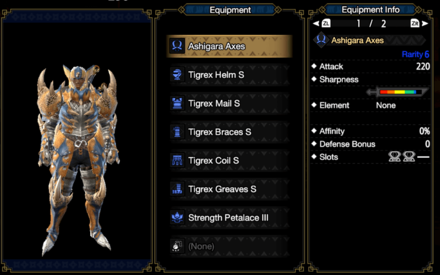 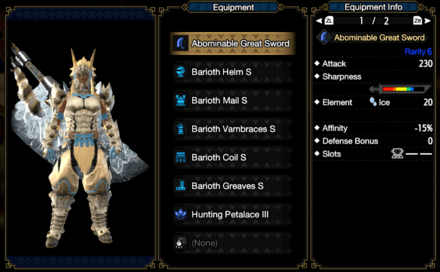 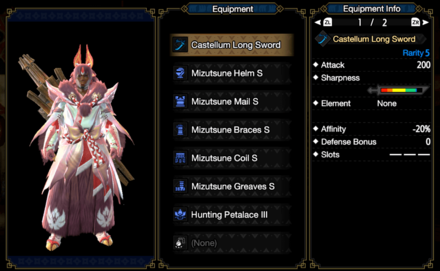 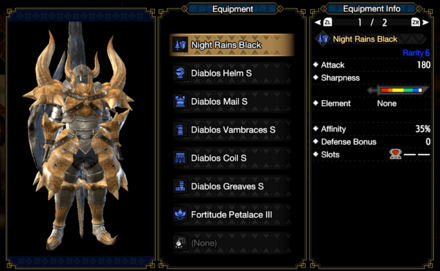 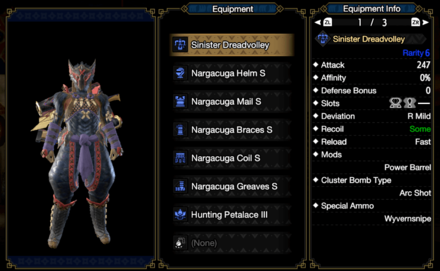 In order to keep the hunting time as low as possible, constant use of the Binding Pierce Switch Skill on Rajang's face and tail is paramount.

Binding Pierce should be the opening move against Rajang when the quest starts as it takes a few moments to aggro and level 3 Earplugs will ignore the initial roar.

Rajang also has several openings that can be used to successfully apply Binding Pierce:

The first hit of the Demon Flurry Rush combo (Demon Mode + A Button) should be used as the main combo until longer burst damage chances are possible.

The first hit spins the hunter in the desired direction allowing them to stay mobile against Rajang's wild swinging attacks as well as remain within optimal melee range.

Be careful not to over commit to the Demon Flurry Rush Combo as the second and third hits have locked animations that may cause you to take an unwanted hit resulting in a DPS loss.

While Rajang's head should be dealt as much damage as possible, this may not always be possible due to its powerful frontal attacks.

Staying at its sides right under its arms is a great way to deal damage with Demon Flurry Rush combos. Focusing the tail, especially when in Enrage Mode, is recommended as well.

Rajang jumps and moves a lot which can cost a lot of time if it moves to far. Using Demon Flurry Rush try to keep as close as possible while dodging Rajang's powerful attacks.

Rajang uses its Thunder Breath, Grab attacks and charge attacks like Spinning Fist and Furious Zig Zag more often if too much distance is created, resulting in a potential time added to the hunt.

Charged Slashes from the sheathed position will be our constant and main source of damage for S Rank clears. The key to taking down Rajang as soon as possible lies in our ability to anticipate its position after performing its attacks.

Refer to the table below for Charged Slash openings during the fight:

Power Sheath is extremely important due to the mobility and damage buff it provides. The damage buff should be maintained at all times throughout the fight to ensure maximum damage.

The key to S Rank with the Long Sword is taking advantage of Rajang's extreme aggression by countering as many hits as possible using Iai Spirit Slash and unleashing a max level Spirit Helm Breaker. The more attacks successfully countered, the higher the DPS and shorter the clear time. Since this is a high risk, high reward play style, hunters may find themselves in a pinch from a single badly timed counter.

Rajang's intial roar and enraged mode roar can be countered with Iai Spirit Slash or Foresight Slash. An optimal opener would be gaining 2 Spirit Gauge levels by countering the initial encounter roar with Iai Sprity Slash then using the Sprit Roundslash combo immediately after.

Foresight Slash in a Pinch

This build does not include Quick Sheath so the Iai Special Stance will be at the default speed. Using Foresight Slash may be more optimal in situations where Special Stance into Iai Spirit Slash would take too long.

Having a max level Spirit Helm Breaker hit anywhere other than Rajang's head or tail will be a DPS loss and will add time to your run. Be strategic in your positioning and aim to deal the most damage to Rajang's weak points.

Taking advantage of the Resuscitate and Bubbly Dance attack buff can also help increase overall DPS if you can find a window for 3 dodges. Iai Spirit Slash and Foresight Slash are excellent attacks to maintain Bubbly Dance efficiently.

Spiral Thrust causes the hunter to wiredash and thrust attack in the desired direction twice. Use this to reposition when Rajang's attacks create unwanted distance or to ensure lance attacks are hitting weak spots.

Pick up the extra Wirebug in the southwest area of the arena to maximize the number of Spiral Thrust counters.

If wirebugs are on cooldown then hunters will want to rely on the Insta-Block Switch skill to maintain the attack boost from Offensive Guard as well as create thrust or wide sweep openings.

A fully charged Wide Sweep does massive damage on the head or tail due to the damage increase from Spiral Thrust and Offensive Guard. It is recommended that it only be used when an ample attack window is available such as when Rajang is knocked down.

Use Sticky, Slicing, and Normal Ammo

Opening with Sticky Ammo 3 on Rajang's head will ensure a fast knock out and potentially a broken horn. This creates a huge DPS window very early on in the fight allow hunters to safely fire power shots at point blank range. Rajang will most likely go into Enrage Mode following this opening.

Slicing Ammo is recommended as the main ammo type once the first knockout has been executed. Not only does it deal consistent damage to Rajang's weak points, but can also break parts and knock Rajang out of Enrage Mode when used on its tail.

Normal Ammo 3 should be used once all Slicing Ammo is exhausted. Adjust your range accordingly.

Shots from the Sinister Dreadvolley Heavy Bowgun deviate to the right mildly and should be accounted for when firing from beyond mid range. Compensate for this deviation by aiming slightly left at mid-range, particularly when using Normal Ammo 3.

Using the Heavy Bowgun Counter Shot Switch Skill is a key technique to boost DPS. Landing the shot on Rajang's head the first time often leads to a quick Wyvern Ride — Always take this into consideration and close in immediately once the opportunity presents itself!

In order for us to make the best articles possible, share your corrections, opinions, and thoughts about 「Arena Quest 05 - Rajang: How to Get S Rank | Monster Hunter Rise | MHR (MH Rise)」 with us!