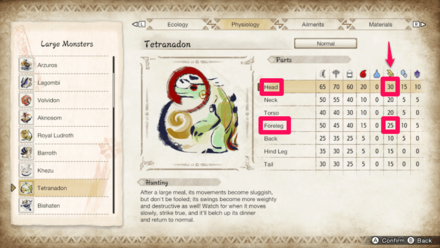 Element Exploit activates whenever you're targeting a monster's body part that has 25 and above weakness to a certain element.

Using the Tetranadon as an example, we can see that its head has a 30 weakness to Thunder damage, and its forelegs have 25 weakness. So whenever you hit those body parts with Thunder damage, Element Exploit will activate.

The overall damage percent increase is around 13%. While we would like to know exactly how much the elemental damage increases, the game sadly doesn't separate its raw and elemental damage numbers.

Register as a member and get all the information you want. (It's free!)
Login
Opinions about an article or post go here.
Opinions about an article or post
We at Game8 thank you for your support.
In order for us to make the best articles possible, share your corrections, opinions, and thoughts about "Element Exploit Ramp-Up Skill Effects | Monster Hunter Rise" with us!
When reporting a problem, please be as specific as possible in providing details such as what conditions the problem occurred under and what kind of effects it had.