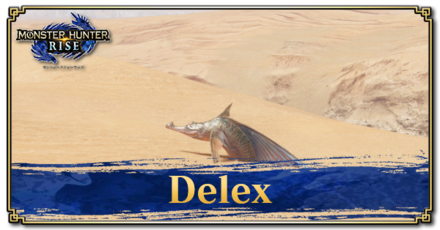 This page is about the Delex, a small monster found in Monster Hunter Rise (MH Rise). Delex locations, as well as Delex dropped materials, carves, and more can all be found here!

Look Out for Delex Outbreaks

Although they spawn at the same spots during their own outbreaks, more Delex will appear than their usual numbers at the following areas, allowing you to slay more Delex during the outbreak!

Drag a Delex with a Flash or Sound Bomb

Hunting Delexes could be a bit difficult because they are always submerged under sand. They can be dragged out of the sand using a Flash Bomb or a Sound Bomb. You can also make use of the Flashfly around the area.

Attack While Riding a Palamute

Delex moves across the sand faster than a hunter so it is quite difficult to hit them with weapons. We suggest riding your Palamute and attacking with X. This allows you to chase Delexes as they swim across the sandy sea!

In order for us to make the best articles possible, share your corrections, opinions, and thoughts about 「Sunbreak Delex Locations and Material Drops | Monster Hunter Rise」 with us!