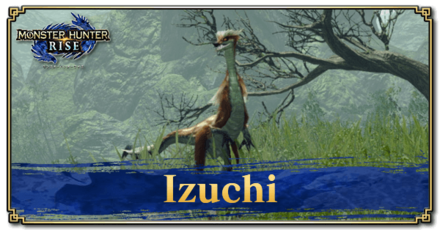 This page is about the Izuchi, a small monster found in Monster Hunter Rise (MH Rise). Izuchi locations, as well as Izuchi dropped materials, carves, and more can all be found here!

Look Out for Izuchi Outbreaks

Izuchi are more common when there is a Izuchi Outbreak in the Shrine Ruins. They tend to appear in more areas than normal so this is the optimal time to hunt them!

Look out for Outbreaks of Baggis in the Frost Islands because Izuchi appear in less areas (only in Area 4!) during this time. Refresh your expedition if you have a Baggi outbreak.

Izuchi are easily farmed with two quests in Low Rank and High Rank:

Izuchi are marked on the map and spawns more frequently so it's easier to farm them! You can even get bonus Izuchi materials from Quest Rewards!

Register as a member and get all the information you want. (It's free!)
Login
Opinions about an article or post go here.
Opinions about an article or post
We at Game8 thank you for your support.
In order for us to make the best articles possible, share your corrections, opinions, and thoughts about "Izuchi Locations and Material Drops | Monster Hunter Rise" with us!
When reporting a problem, please be as specific as possible in providing details such as what conditions the problem occurred under and what kind of effects it had.