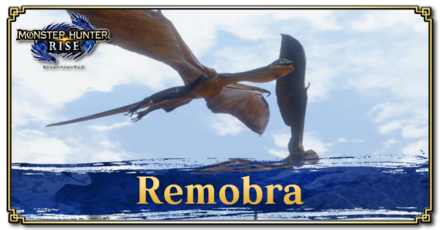 This page is about the Remobra, a small monster found in Monster Hunter Rise (MH Rise). Remobra locations, as well as Remobra dropped materials farm, carves, and more can all be found here!

Farm for the Remobra Armor Set

The Remobra Armor Set is known for its built-in Critical Element and Weakness Exploit. Plus, they are pretty easy to hunt in areas like the the Lava Caverns and Frost Islands.

Look Out for Remobra Outbreaks

Remobra are more common when there is a Remobra Outbreak in the Lava Caverns. They tend to appear in more areas than normal so this is the optimal time to hunt them!

Lava Caverns has the most areas where Remobras often appear. This location is recommended for farming Remobra materials.

Only Appears at the Top of Area 05

Remobra only appears in one location in the Shrine Ruins and that's on top of the mountain in Area 05. This is a place that's quite difficult to get to so we don't recommend farming Remobra here - go to other locales especially the Lava Caverns!

In order for us to make the best articles possible, share your corrections, opinions, and thoughts about 「Sunbreak Remobra Locations and Material Drops | Monster Hunter Rise」 with us!