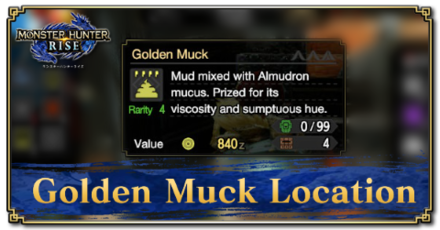 This is a farming guide for Golden Muck, an item in Monster Hunter Rise (MH Rise). Check here for all Golden Muck locations and drop sources, as well as Golden Muck uses in equipment and decoration crafting.

Golden Muck - How to Farm

Obtained As a Monster Reward

Almudron is the monster to beat if you want to get a hold of Golden Muck. Capturing or defeating Almudron grants Golden Muck as a reward, it also has the chance of being dropped in the heat of battle.

Almudron is not an easy monster to face, especially when you are new to the game. You hunt him in a ★6 Urgent Village Quest called Hermit of the Swamp, and acts as your entry point to ★6 level quests.

Similarly you can hunt Almudron in the following ★3 Hub Quests Tail to Tail and Down 'n' Dirty. Team up with others if you want to farm it faster!

Golden Muck - How to Use

Register as a member and get all the information you want. (It's free!)
Login
Opinions about an article or post go here.
Opinions about an article or post
We at Game8 thank you for your support.
In order for us to make the best articles possible, share your corrections, opinions, and thoughts about "Golden Muck Location: How to Get and Uses | Monster Hunter Rise" with us!
When reporting a problem, please be as specific as possible in providing details such as what conditions the problem occurred under and what kind of effects it had.