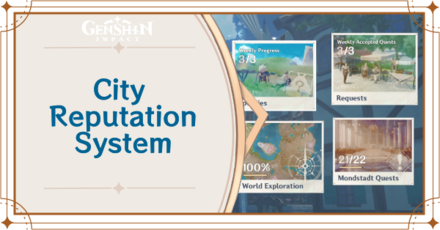 This is a news article about the upcoming new Reputation System revealed during Mihoyo's 1.1 Update for Genshin Impact. Learn about how to unlock the Reputation System, improve your Exploration Level, and all the unlockable Rewards!

Progress Is Separated For Different Regions 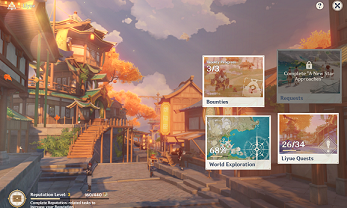 Look for the Reputation Icon on the Map

As soon as 1.1 was released, the Reputation NPCs for both Liyue and Mondstadt were added, and their location is shown with the new symbol above. The NPC in Mondstadt is Hertha and the NPC in charge in Liyue is Ms. Yu.

Bounty quests are enemy hunt missions that can be completed 3 times total per week and reward Reputation EXP and Mora. The stronger the Bounty, the more Reputation EXP rewarded.

Requests are material and food gathering missions from various folk in the region. These quests can be completed 3 times per week and reward Reputation EXP and Mora.

Increasing your Reputation Level will grant you with rewards such as, Oculi and Treasure Compass Blueprints, Namecard Style, and Wind Glider Skins.

Register as a member and get all the information you want. (It's free!)
Login
Opinions about an article or post go here.
Opinions about an article or post
We at Game8 thank you for your support.
In order for us to make the best articles possible, share your corrections, opinions, and thoughts about "City Reputation System for 1.1 Update" with us!
When reporting a problem, please be as specific as possible in providing details such as what conditions the problem occurred under and what kind of effects it had.