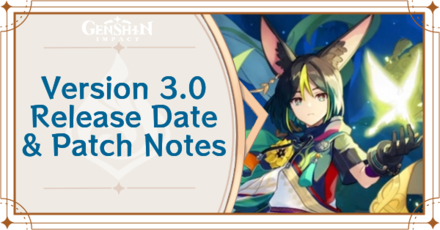 When was Genshin 3.0 Released?

Everything Happening in Genshin 3.0 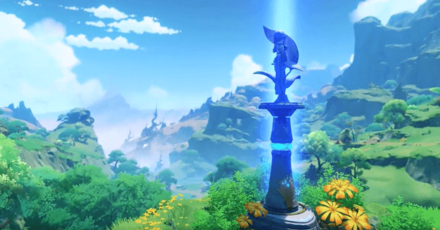 One of the biggest highlights of the 3.0 update is the release of the Sumeru region. Sumeru is the Dendro region and is home to Teyvat's finest scholars. It's divided into two major areas: the Rainforest and the Desert.

The release of Sumeru comes with a whole new map, quests, puzzles, and exciting lore! See everything we know about Sumeru in our full guide.
Sumeru Release Date & Map Guide

Genshin 3.0 shed some light on the mysterious Dendro element. New characters, reactions, and mechanics came with the Dendro update in 3.0.
Dendro Element Guide

Banners and Reruns in Genshin 3.0

Banners in Version 3.0 will end one week shorter than previous versions.

The new characters in Genshin 3.0 are Tighnari, Collei, Dori, and the Dendro Traveler. We also get reruns for Zhongli, Ganyu, and Kokomi!
All Sumeru Characters

Other Character Appearances in Genshin 3.0

Hunter's Path is the only 5-star weapon coming to Genshin 3.0. It's obtainable from the weapon banner. You can get End of the Line weapon from Fishing in Sumeru!
List of Weapons

New Wildlife and Plants in Genshin 3.0

Changes and Optimizations in Genshin 3.0

In order for us to make the best articles possible, share your corrections, opinions, and thoughts about 「Genshin Impact 3.0 Release Date, Characters, and Banners | Genshin Impact」 with us!