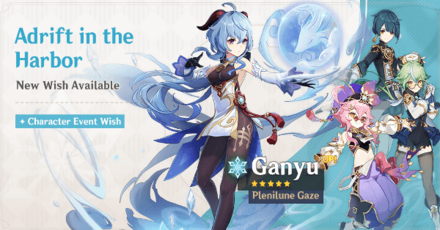 Due to Version 3.0's shorter duration, the character banner durations will be shorter for Phase 2.

Ganyu's rerun banner was on the second phase of Version 3.0! She will had her rerun alongside Kokomi. The new 4-star character ''Dori'' was a featured character on both banners!
Genshin Version 3.0 Update

Which 3.0 Banner Are You Pulling On?

Is Ganyu's Banner Worth It?

Should You Pull on the Adrift in the Harbor Rerun?

Ganyu is a Cryo Bow user who deals high charged attack damage from long range. She provides an alternative way to play the game by enabling players to deal big damage from a safe distance.
Ganyu Rating and Best Build

As for the featured 4 stars, Dori is a new character that can heal and restore elemental energy for the active character. Xingqiu and Sucrose are high tier characters that can provide additional DMG and buffs.

The Adrift in the Harbor Wish banner includes all standard 5-star and 4-star characters. You cannot get any 5-star event characters from Ganyu's banner other than Ganyu.

There is a 50% chance to pull the featured 5-star character on your first 5-star pull. If you get a different 5-star on the Gentry of Hermitage banner during this dual banner event, you can come back to this banner and get a guaranteed copy of Ganyu!

Past Ganyu Banners and Reruns

In order for us to make the best articles possible, share your corrections, opinions, and thoughts about 「Ganyu Banner Release Date and 4-Star Characters | Genshin Impact」 with us!