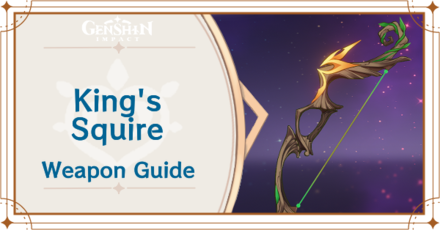 The King's Squire is a craftable 4-Star Bow in Genshin Impact 3.0. We have the best characters for the King's Squire, its tier rating, weapon stats, and its ascension materials in this weapon guide!

Who is the King's Squire Good For?

The King's Squire is only viable for Main DPS characters. Due to the nature of its passive, your Main DPS will need to be swapped in only after all other characters have used their Elemental Skills and Bursts.

Is King's Squire a Good Weapon?

There are better craftable bows than the King's Squire, like the Prototype Crescent or the Hamayumi. The long cooldown of the passive dampers the strength of this weapon by a lot and should only really be used by similar characters with equally long cooldowns to their Skill or Burst.

How to Get King's Squire Blueprint

You can get the blueprints of the King's Squire by exchanging Stories of You and the Aranara with Aravinay, near the Tree of Dreams.

In order for us to make the best articles possible, share your corrections, opinions, and thoughts about 「King's Squire Best Characters and Weapon Guide | Genshin Impact」 with us!