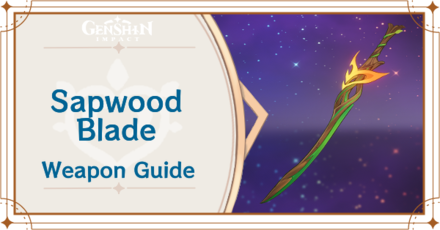 The Sapwood Blade is a craftable 4-Star Sword in Genshin Impact 3.0. We have the best characters for the Sapwood Blade, its tier rating, weapon stats, and its ascension materials in this weapon guide!

Who is the Sapwood Blade Good For?

The Sapwood Blade is a good choice for off-field Support characters who can still deal damage. However, it's limtited to only Dendro focused teams.

Is Sapwood Blade a Good Weapon?

The Sapwood Blade has everything a support character would want. Energy Reacharge and a way to buff your DPS are core components all support characters need, making this weapon a very good investment for F2P players.

How to Get Sapwood Blade Blueprint

You can get the blueprints of the Sapwood Blade by exchanging Stories of You and the Aranara with Aravinay, near the Tree of Dreams.

In order for us to make the best articles possible, share your corrections, opinions, and thoughts about 「Sapwood Blade Best Characters and Weapon Guide | Genshin Impact」 with us!