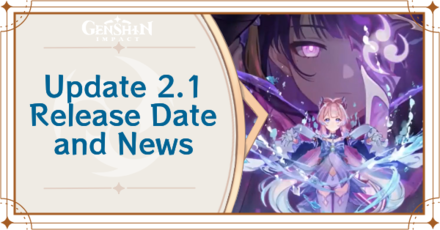 Update 2.1 of Genshin Impact was released on September 1, 2021. Learn the version's character banners, events, features, and patch notes in this guide!

When did Update 2.1 released?

Genshin Impact 2.1 was released on September 1, 2021. The highlights of the release included four new characters, a new Archon Quest, the Moonchase Festival, the Fishing System, and other updates!

The information in this page is from the 2.1 Livestream, which aired on August 20, 2021. Watch the full livestream in our guide:
2.1 Livestream Summary

Aloy is a free 5-Star Character!

Other Characters in Update 2.1

Yae Miko and Scaramouche made story appearances in Version 2.1!
List of Other Upcoming Characters

How to Get the New Weapons

Engulfing Lightning and Everlasting Moonglow can be pulled from the Epitome Invocation Banner, while the fish-shaped weapons can be earned by playing through events!

Quests and Events in Update 2.1

All New Quests and Missions

The story continued with a Chapter 2: Act 3 Archon Quest, and two Story Quests for the 5-Star characters: the Raiden Shogun and Kokomi!

Version 2.1 also introduced a weekly boss, with a familiar face: La Signora! We also saw new elemental forms of the Hypostasis and the Oceanid.

All Bosses and Boss Fight Guides

These Specter enemies was introduced in the Version 2.1 event: Spectral Secrets!

All New Features and Changes

Register as a member and get all the information you want. (It's free!)
Login
Opinions about an article or post go here.
Opinions about an article or post
We at Game8 thank you for your support.
In order for us to make the best articles possible, share your corrections, opinions, and thoughts about "Genshin Impact 2.1 Release Date & Patch Notes" with us!
When reporting a problem, please be as specific as possible in providing details such as what conditions the problem occurred under and what kind of effects it had.