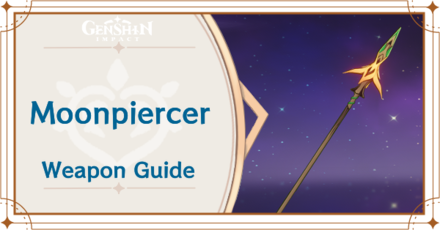 The Moonpiercer is a craftable 4-Star Polearm in Genshin Impact 3.0. We have the best characters for the Moonpiercer, its tier rating, weapon stats, and its ascension materials in this weapon guide!

Who is the Moonpiercer Good For?

Good Pick for Sub-DPS and Support

The Moonpiercer is a flexible weapon that can work for both Sub-DPS and Support Characters. Its EM substat means that the character wielding the weapon will be dealing damage primarily through Elemental Reactions. At the same time, it can also provide an ATK% buff to whoever picks up the leaves.

Is Moonpiercer a Good Weapon?

Given how few Support Polearms there are, the Moonpiercer easily falls under as one of the better Support Polearms in the game. As a Sub-DPS weapon, it falls a bit behind other damage dedicated polearms.

How to Get Moonpiercer Blueprint

You can get the blueprints of the Moonpiercer by exchanging Stories of You and the Aranara with Aravinay, near the Tree of Dreams.

In order for us to make the best articles possible, share your corrections, opinions, and thoughts about 「Moonpiercer Best Characters and Weapon Guide | Genshin Impact」 with us!