How to Build a Doubles Team | Pokemon Sword and Shield 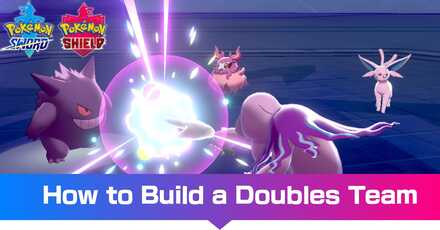 This page explains everything you need to know about Doubles teams in Pokemon Sword & Shield. Read on to learn the basic teams and strategies used in doubles battles, and how to counter opposing doubles teams.

Due to the fast-paced nature of doubles, Pokemon roles are not as set in stone as it is in Singles play. Sweepers often require more complex EV spreads, and defensive Pokemon need support moves that can assist in offense.

To learn more about the basics of the Doubles battle format, read our guide below:

Hyper Offensive, Weather, and even Trick Room Teams are quite common in the doubles format. As a general rule though, it's important to have at least two attackers and two support Pokemon in the team.

This applies to both 4 and 6 Pokemon full teams.

Take a look at the example standard doubles team below for ideas:

Gyarados and Gengar function as the main sweepers for this team while Noivern and Amoonguss are for support.

Noivern is always partnered with Gyarados so it can provide Tailwind support, which will help Gyarados set up Dragon Dance faster and outspeed opposing Pokemon.

Gengar is this team's secondary sweeper. Because it's not as bulky as Gyarados, it needs redirection support from Amoonguss. One Rage Powder redirection ensures Gengar can set up with Nasty Plot and sweep with its coverage moves.

Interested in trying this team? Take a look at our guide below for rental information on this doubles team.
Best Standard Doubles Team for Ranked Battle

The current doubles metagame is still dominated by offensive-oriented teams, with Dynamax providing easier access to set up and sweep.

Below are some of the common doubles teams used in Pokemon Sword & Shield:

Weakness Policy raises the Attack and Sp.Attack of the Pokemon when it's hit by a super effective attack. Since you send out two Pokemon at once during the battle, you can attack the Weakness Policy holder with another Pokemon to get the boost instantly.

Weakness Policy Sweepers are often Pokemon with a naturally high speed stat and are often used as set-up or Choice-locked sweepers.

In doubles, excellent users of this held item are Pokemon that can be hit by relatively weak attacks before their turn.

Take a look at the example team below:

This is a standard Rain Team but we use the Weakness Policy held item to help the main sweeper, Starmie, set up faster.

On the first turn, Pelipper will use U-Turn on Starmie to activate Weakness Policy, and switch to Indeedee to provide Redirection support.

At the end of the first turn, Rain and Psychic Terrain are set up, while Starmie is now at +2 Attack and +2 Sp. Attack.

Starmie can now sweep the opposing team with Expanding Force, which hits all grounded Pokemon when Psychic Terrain is in effect. To avoid getting damaged, Indeedee will use Protect.

If you are facing a Psychic-type resist or Dark-type Pokemon, use Hydro Pump.

Alternatively, we can Dynamax Starmie and use Max Geyser or Max Mindstorm. These two moves can set up Rain and Psychic Terrain respectively again if they were removed earlier.

Poliwrath serves as a good back-up Belly Drum sweeper. As long as Psychic Terrain is active, this team doesn't need to fear from priority Grassy Glide from opposing Rillaboom.

Ludicolo is a great special sweeping alternative to Starmie. It has a unique Grass/Water STAB typing, which means it can threaten opposing Rain Teams. It's also weak to U-Turn, which means it gets an immediate boost from Weakness Policy.

While it's easier to set up Trick Room in doubles, it's also more challenging to keep it up since the opposing team will instantly target your trick room setters. To ensure your doubles Trick Room team succeeds, you need to choose the right Pokemon and have redirection support.

Take a look at the example team below:

On the first turn, Oranguru will use Trick Room. It will most likely be the target of Taunt, so we have Mental Herb to ensure it can set up Trick Room. Copperajah is this team's physical attacker, with it's strongest attack being STAB Heavy Slam boosted by its Heavy Metal ability.

Thanks to Oranguru's Telepathy ability, it will not get damaged if you decide to use Earthquake with Copperajah.

Once Trick Room has been set up, we can now sweep with Copperajah. Oranguru provides valuable support by using Instruct on its ally, forcing it to use its last used move. This means Copperajah essentially attacks twice during your turn! Oranguru can also provide redirection support by using Ally Switch.

Hatterene is a great back-up sweeper with a massive special attack stat and great coverage moves. It's also a good back-up Trick Room setter in the event Oranguru gets taken out.

Clefable is our secondary support Pokemon, primarily functioning as a cleric while also providing valuable Helping Hand and redirection support.

Escavalier is a good alternative to Copperajah as the team's main physical sweeper. It's faster under Trick Room and has a plethora of high powered physical attacks such as Iron Head, Megahorn, and Close Combat.

For the switch-ins, Reuniclus is a great alternative to Hatterene. Not only can it set up Trick Room, it also has a wide special movepool.

Intimidate teams are very common in the doubles format, and teams specifically designed to counter them are just as common.

With the introduction of the move Lash Out in the Isle of Armor, certain physical sweepers can now turn the tables against opposing Intimidate teams.

Bisharp is arguably the best user of Lash Out thanks to its Defiant ability.

Defiant raises the Pokemon's attack stat by two stages, effectively giving Bisharp a +1 attack after Intimidate. Since its attack was already lowered, Lash Out gets a boost - turning it into a 150 base power STAB move!

Togekiss functions as this team's redirection support and cleric with using the move Follow Me and Life Dew. Dazzling Gleam and Air Slash are its primary attacking moves, as their secondary effects get a boost from Serene Grace.

Milotic is our main anti-Intimidate switch-in, as it gets +2 Special Attack from Intimidate thanks to its Competitive ability. Make sure to Coil on its first turn to get an attack, defense, and accuracy boost - the latter essentially giving Hypnosis and Muddy Water perfect accuracy.

Urshifu is our back-up Physical Sweeper and is our choice for Gigantamax Pokemon. Wicked Blow has a guaranteed critical hit, which means it bypasses negative attack stat changes. This makes it a great attack to get locked in with Choice Band.

Obstagoon is another Pokemon that can serve as an anti-Intimidate lead with Defiant and Lash Out. While it has a lower attack stat and weaker dual-typing than Bisharp, it has higher mixed defenses and better speed.

While there are no set strategies to counter all kinds of doubles teams, there are ways you can better predict or even check what the opposing Pokemon's movepool is.

Using Protect on the first turn is a safe way to scout moves and check what your opponent's team looks like. Similar moves, such as Baneful Bunker, Detect, and King's Shield are also good scouting moves.

Keep in mind that there are moves that can bypass Protect! The move Feint breaks a Pokemon's Protect, allowing other Pokemon to attack it for that turn. Urshifu's ability, Unseen Fist, also bypasses Protect.

Wide Guard is a move that protects your team from multi-target moves, such as Earthquake, Surf, and Rock Slide. It also protects against multi-target status moves like Teeter Dance.

This move has a +3 priority, which means it will go before a faster Pokemon that's planning to hit your team with a multi-target move even when it's used by a slower Pokemon.

Take note that this move's mechanics is similar to Protect; using it consecutively after each turn increases the chance it will fail.

In order for us to make the best articles possible, share your corrections, opinions, and thoughts about 「 How to Build a Doubles Team | Pokemon Sword and Shield」 with us!