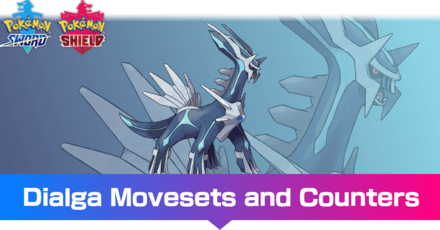 This is a strategy guide for using Dialga in competitive play for the games Pokemon Sword and Shield. Read on for tips on the best Nature, EV spreads, Movesets, and Held Items to use with Dialga, as well as its strengths and weak points. 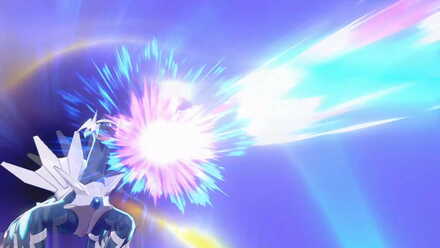 Dialga's great typing and mixed defenses make it a great candidate for Dynamaxing. With Dynamax boosting its HP, the Temporal Pokemon can further boost its team's natural bulk with Max Steelspike and Max Wyrmwind.

Roar of Time is Dialga's strongest Dragon-type STAB and is best used during Dynamax where it becomes a 150 Base Power Max Wyrmwind. Not only does it deal great damage, it also lowers the opposing team's Attack stat by 1 stage.

Its last two moves are for coverage. Earth Power provides great neutral coverage and boosts Dialga and its team's Special Defense stat by 1 stage when it becomes Max Quake during Dynamax.

Fire Blast is a great all-round coverage move, hitting opposing Steel-types such as Ferrothorn and Corviknight that take little damage from the Temporal Pokemon's STAB moves.

We're using a standard bulky attacking set for Dialga, with full investment in HP and Sp.Atk and investing 4 Sp.Def to round off its bulk.

Pressure is Dialga's best Ability, causing the opponent to spend 2 PP for moves when targetting Dialga.

Dialga has several items it can use.

Weakness Policy is a great choice due to Dialga's rather common weakness to Fighting and Ground-type moves, but is mitigated by its great natural bulk and the HP boost from Dynamax. Once activated, Dialga gets a +2 Attack and Special Attack boost.

Life Orb boosts the power of Dialga's moves by 30% at the cost of some residual damage at the end of every turn.

Assault Vest boosts Dialga's Special Defense by 50% but restricts status moves. At level 50 and the given EV spread, Dialga will have an effective 242 Special Defense stat.

This defensive Dialga was used by Tenku to reach 15th place in the current Ranked Battle Season. While Dialga is a powerful special attacker in its own right, it's also a capable defensive Pokemon - especially when using Iron Defense and Body Press.

Much like Corviknight, Dialga is a great check to common physical attackers in the current metagame. While it doesn't have reliable recovery, its great Special Attack lets it threaten and heavily damage the same Pokemon it walls even with minimal special attacking investment!

Flash Cannon is Dialga's main STAB move and still hits hard despite the minimal Special Attacking investment. This move allows the Time Pokemon to check Fairy-types such as Mimikyu and force them to switch or risk getting heavily damaged or knocked out.

Thunder is a powerful Electric-type coverage move that allows Dialga to turn the tables against Kyogre who provides the move with 100% accuracy thanks to its Drizzle Ability. It's also a good move to use against Celesteela, forcing the Ultra Beast to switch and preventing it from setting up Leech Seed.

Its last two moves are crucial to this build: Body Press uses Dialga's Defense stat to calculate damage, allowing it to hit very hard thanks to this build's Defense investment.

Pressure is Dialga's best Ability, causing the opponent to spend 2 PP for moves when targetting Dialga.

Since Dialga lacks any recovery move, we're giving it Leftovers to provide it passive healing at the end of every turn.

How to Use Dialga Effectively

Dialga sets itself apart from other Dragon-types by boasting excellent defensive stats, and is one of the few that take normal damage from Fairy-type moves and hit back with a super effective Steel-type move.

It's also one of the few Dynamax Pokemon that doesn't fear Zacian's Behemoth Blade thanks to its Steel typing, and can fire back with a super effective Max Quake or Max Flare.

How to Build a Team with Dialga

Dialga enjoys widespread usage due to a combination of excellent Special Attack, great coverage moves, and natural bulk. It's often the top choice for Dynamax Lead or main Dynamax Pokemon, though it faces some competition from the likes of Xerneas.

Dialga makes a great bulky lead for Hyper Offense teams, and unlike other leads, can patch up its team's defense with Max Steelspike or Max Wyrmwind.

Landorus (Therian Forme) is this team's offensive pivot, with Dialga switching into it if it encounters a Ground or Fighting-type Pokemon.

Mimikyu rounds off this team by functioning as a late-game setup sweeper and appreciates the defense boost Dialga sets up during Dynamax, 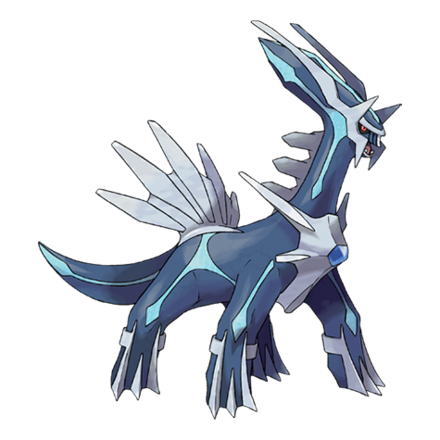 Although Dialga has great natural bulk and resistances, it's also weak to very common attacking types such as Fighting and Ground-type moves. Using these moves can easily wear down the Temporal Pokemon and even outright KO it!

Overpower it with Repeated Hits

Depsite its natural bulk, Dialga lacks a reliable way to recover lost HP. This means it's easy to wear it down, and due to its rather medicore Speed stat, outspeed by late-game cleaners.

Post (0 Comments)
Opinions about an article or post go here.
Opinions about an article or post
We at Game8 thank you for your support.
In order for us to make the best articles possible, share your corrections, opinions, and thoughts about "Dialga - Moveset & Best Build for Ranked Battle" with us!
When reporting a problem, please be as specific as possible in providing details such as what conditions the problem occurred under and what kind of effects it had.