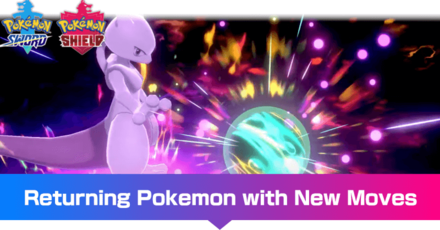 With the release of the Crown Tundra for Pokemon Sword and Shield, many Pokemon gained access to new moves or hidden abilities that were previously unobtainable. This page aims to address these new changes and ranks the buffed Pokemon!

Out of all the buffed Pokemon, Celesteela is definitely one to look out for. Using Max Airstream it can increase its speed and stall with a mixture of Leech Seed and Substitute.

Alongside Meteor Beam and Steal Beam which become high powered Max Moves, combined with Max Airstream it is also great for Dynamaxing.

Landorus didn't receive any new moves but with its access to STAB Max Airstream, it can now boost its attack while dealing heavy damage. Without any real nerfs coming at it this time around, Landorus in its Therian Forme is still a force to be reckoned with.

Like the two before, it Dragonite's ability to use Max Airstream is huge buff. Being a Flying type, Max Airstream also gets STAB to hit hard while raising its speed. With 130 base attack while Dynamaxed, Dual Wingbeat is another powerful attack Dragonite can now learn.

Latios gains two powerful moves as well as Air Slash which can become Max Airstream while Dynamaxed. With one use of Max Airstream, Latios can even outspeed Dragapult, making it more than just an attacker but a strong candidate for Dynamaxing.

Aura Sphere is perfect when going up against the Rock and Dark type Tyranitar while Mystical Fire can safely take care of Pokemon like Ferrothorn or Scizor.

Salamence can learn Hurricane and Dual Wingbeat which will turn into Max Airstream and Max Wyrmwind respectively. As Salamence can run either physical or special builds one of its strengths comes in its ability to learn Flying-type attacks of both categories.

With is hidden ability, Moxie, KOing Pokemon with Max Airstream will both raise its speed and attack, making it perfect for Dynamaxing.

Entei's hidden ability, Inner Focus, prevents it from taking the attack penalty from Intimidate. This makes it good to go up against Therian Landorus or Gyrados where others would be weakened in the process.

Entei also gains the ability to learn Extreme Speed, one of the best priority attacks in the game, making it especially powerful.

Garchomp gains access to the speed increasing Scale Shot. This is powerful enough in itself, but Garchomp also gains access to quite a few other strong Dragon-type moves.

Pheromosa can now learn the incredibly strong STAB move Close Combat. It may have 10 less power than High Jump Kick, but with its 100 accuracy there's no risk of missing and losing half of your HP, so it's a better and safer option.

Triple Axel will help to take out Mimikyu's Disguise as well as taking out Pokemon like Garchomp or Landorus if they run Focus Sash. This may end up being a better choice over Ice Beam.

Nihilego gains access to the 150 power STAB move, Meteor Beam. Pair this with a Power Herb and it can skip the entire charging process and deal heavy damage immediately, making it similar to Z-Moves from the previous Generation.

With Beast Boost in the mix, each time it KOs an opponent its speed will also increase, making it easy to boost its stats.

Zapdos is strong enough on its own, but this time around it gains access to quite a few powerful moves while Dynamaxed. Hurricane powers up into Max Airstream that will have lasting effects even after Dynamax is over and Rising Voltage for even more damage. With this in mind, Zapdos is another great choice for Dynamaxing.

Zapdos can also learn the previously exclusive to Pokemon XD move, Baton Pass, through leveling, so it can pass on its speed boosts to another Pokemon.

For some reason, Raikou can now learn Scald, which is a good way to handle Ground type Pokemon, so it may become a necessary move. It can also learn Aura Sphere normally, which was previously a distribution exclusive move, and is great for going after Ferrothorn.

Heatran can learn the new Ground-type move Scorching Sands. As far as attacking goes, Earth Power is a better move to use, but with its 30% chance to burn it becomes a good choice for bulkier builds focused on survivability.

Heatran also has the ability to learn Steel Beam. While Steel Beam has its downsides, while Dynamaxed you don't have to worry about them and use it freely.

With the release of Crown Tundra, Dracovish can now utilize its hidden ability, Sand Rush. As speed is key when using Fishous Rend, Dracovish is a good choice for a Sandstorm-based party. With its ability to also learn Stone Edge, it can create sandstorms on its own using Max Rockfall as well.

Like Dracovish, Dracozolt also gains access to Sand Rush. We placed Dracozolt in C-Tier as it can easily be countered by Landorus and Hippowdon who are immune to Bolt Beak, making Dracovish and Fishous Rend that can't be blocked by any type a better choice.

With its return, Aurorus can now learn the party protecting Aurora Veil. Compared to Alolan Ninetails, however, it's hard to recommend due to its lower speed stat, but many players may not be expecting to deal with one.

How to Get Regigigas and Learnset

Previously the only way Kartana could naturally boost its speed was by using an attck debilitating nature to have Beast Boost work in speed's favor. Now, however, Kartana has access to Max Airstream, so it can increase its speed without crippling its attack power.

Tornadus can now learn Nasty Plot. Paired with Max Airstream for a speed boost, Tornadus will make for a good Dynamaxer.

In order for us to make the best articles possible, share your corrections, opinions, and thoughts about 「The Crown Tundra Pokemon Buffs | New Moves for Returning Pokemon | Pokemon Sword and Shield」 with us!