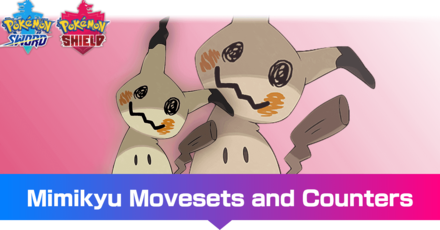 This is a strategy guide for using Mimikyu in competitive play for the games Pokemon Sword and Shield. Read on for tips on the best Nature, EV spreads, Movesets, and Held Items to use with Mimikyu, as well as its strengths and weak points. 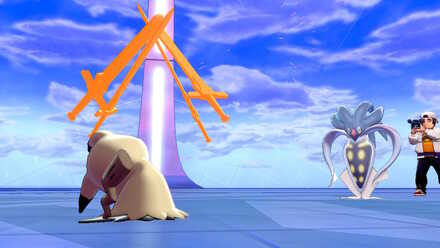 Mimikyu is one of the best users of Swords Dance since its Disguise Ability almost always guarantees that it can get at least one boost up. As a result, this build is best used as a lead.

Shadow Claw is its main Ghost-type STAB and has an increased chance to deal a critical hit. Shadow Sneak is its secondary Ghost STAB, having a + 1 priorty that lets Mimikyu hit faster Pokemon.

This build uses a simple EV spread with full investment in Attack and Speed so that Mimikyu hits as hard and as fast as possible.

The remaining 4 EVs are invested in HP to round off Mimikyu's bulk.

After Mimikyu's Disguise gets hit, it changes to its Busted Form and loses 1/8 of its maximum HP.

Life Orb is the best held iteam for this build. This boosts the power of Mimikyu's moves by 30% at the cost of some recoil damage. 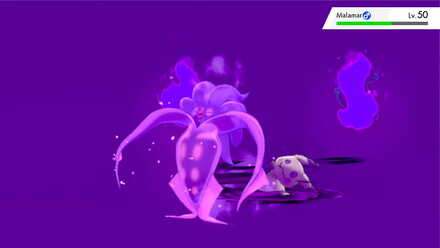 This Mimikyu fills the role of a bulky attacker during Dynamax, using its Disguise Ability to give it a free turn to set up with Swords Dance and fire powerful Max Moves.

Phantom Force is a powerful Ghost-type STAB that, although it takes two turns to deal damage, provides a stronger Max Phantasm during Dynamax. It also damages on the turn it's used during Dynamax.

Shadow Sneak is its secondary Ghost STAB, having a + 1 priorty that lets Mimikyu hit faster Pokemon.

This move also becomes Max Starfall during Dynamax, which sets up Misty Terrain that prevents and cures Mimikyu of any status.

We're using a more complex EV spread for this build.

The remaining 10 EVs are placed in Spd so that it can outrun slower physical attackers and defensive Pokemon.

Kee Berry further boosts Mimikyu's bulkiness. When it gets hit by a physical move, its Defense stat increases by 1 stage. 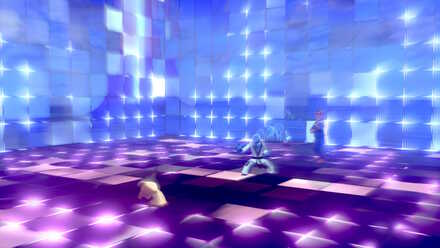 Mimikyu's respectable 96 Base Speed stat make it an unusual Trick Room setter, but it's also one of the safest thanks to its Disguise Ability.

Since it can function without Trick Room, it's an invaluable team member as it keeps up the offensive momentum of your team even if there's no Trick Room yet.

Curse is a risky but potentially useful move that allows Mimikyu to threaten and force switches. Since it's a Ghost-type Pokemon, Mimikyu loses 1/2 of its HP when it uses this move but also causes the opponent to lose 1/4 of its HP every turn*.

Shadow Sneak is its secondary Ghost STAB, having a + 1 priorty that lets Mimikyu hit faster Pokemon. It also retains its boosted priority even in Trick Room.

We're using a bulkier but simpler EV spread for this Mimikyu.

228 HP EVs and 124 Def EVs make it as physically bulky, while 156 Atk EVs let it hit as hard as possible with its STAB moves.

Kee Berry further boosts Mimikyu's bulkiness. When it gets hit by a physical move, its Defense stat increases by 1 stage. 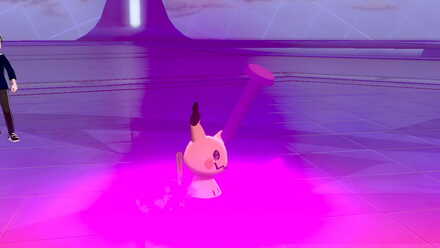 This Mimikyu fills a support role in a team, using a combination of tricky Status moves to deal damage and harrow the opposing team.

Substitute causes Mimikyu to lose 1/4 of its HP to create a substitute that stacks with its Disguise, requiring the opposing Pokemon to hit Mimikyu twice to remove all of its protection.

Both Substitute and Curse work well with Pain Split, which essentially splits Mimikyu's HP loss to the opposing Pokemon.

It's last move is Play Rough and is its only STAB move, hitting Fighting, Dark, and Dragon-types for super effective damage.

We're using a modified attacking EV spread with this build. 12 HP EVs give Mimikyu 132 HP at level 50. With an even numberd HP, the amount of HP it loses when it uses Substitute or Curse is reduced.

244 Atk EVs ensure it hits as hard as possible, while full investment in Speed ensures it can outspeed slower opposing Mimikyu and defensive Pokemon.

Figy Berry restores Mimikyu's HP when it drops down to 1/3 of its maximum HP. Since it has an Jolly Nature, it won't get confused if it eats it.

Mimikyu is protected by both its Disguise Ability and Mental Herb so it can safely use and set up Trick Room.

Once Trick Room is in play, its main weapon during those turns will be Play Rough, a physical Fairy-type move. Will-o-Wisp is useful against opposing physical attackers to weaken their attacks and deal constant damage from being burnt.

Taunt can be used for any Pokemon that might inflict status effects on your team, or from any opposing Trick Room users that may cancel out your strategy by using Trick Room again.

EVs are given to Mimikyu's HP and Defense to give it a little bit bulkiness from your opponent's attacks while Trick Room is in play.

Mental Herb allows Mimikyu to shake off any Taunts from your opponents and continue on setting up Trick Room.

Disguise guarantees that Mimikyu will be able to set up Trick Room without the need of held items.

How to Use Mimikyu Effectively

One of the Best Setup Sweepers

Mimikyu is arguably one of the best setup sweepers with Swords Dance courtesy of its Disguise Ability, essentially giving it a free turn to boost its Attack.

The fact that Mimikyu forces switches mean that it can often get two Swords Dance boosts up, potentially letting it steamroll and sweep the opposing team.

Use Max Starfall During Dynamax

Mimikyu is easily crippled by status such as burns and paralysis, but this is easily mitigated if it Dynamaxes and uses Max Starfall.

This Max Move creates Misty Terrain on the battlefield which prevents status moves such as Will-O-Wisp and Thunder Wave, and cures Mimikyu of any status it's currently afflicted with.

Disguise is Effective Against Legendaries

Mimikyu's Disguise ability will even protect it from the previously banned Legendary Pokemon, allowing it to support others on its team by setting up with damage over time moves like Thunder Wave or Curse. This is also a good buffer for starting up Trick Room.

You can let Mimikyu hold Mental Herb to shrug off any Taunts inflicted on it.

Best Pokemon to Use With Mimikyu

Mimikyu can be easily defeated with Steel-type attacks, so it is recommended to have Fire- or Ground-types as backup.

Mimikyu is vulnerable to physical attacks and Landorus with Intimidate, so it is recommended to support it with special attackers. Additionally, opponents may use Will-O-Wisp to further weaken Mimikyu, which will have little effect on special attackers.

Mimikyu takes no damage from Normal-, Fighting-, and Dragon-type moves. One can use Pokemon that goes well with Mimikyu's invulnerabilities to have the upper hand in face-to-face battles.

How to Build a Team with Mimikyu

Mimikyu is a versatile offensive Pokemon that can fill the role of a setup sweeper, bulky attacker, or as a Lead Dynamax user.

Mimikyu is one of the best lead setup sweepers for Hyper Offense teams and can be used as is or as a Dynamax Lead depending on your team composition.

Mimikyu's role in this team is to quickly set up with Swords Dance so that it can deal as much damage to the opposing team, softening them up for its teammates.

Mimikyu lacks coverage against Fire, Poison, and Dark-types that nullify their Fairy Weakness such as Bisharp, so it's important to choose your teammates wisely.

Cobalion functions as the team's offensive pivot, with its Steel/Fighting typing covering Mimikyu's lack of coverage against Poison and Dark-types. It's also a great switch-in to Dark-types thanks to its Justified Ability, which boosts its Attack by 1 stage.

Latios covers Mimikyu's lack of coverage against Fire-types, using Surf to heavily damage the likes of Heatran or overpower frailer ones with its Draco Meteor. It's Dragon-typing also gives it resistances to Fire-type moves.

Check out our article below to learn more about building an offensive-oriented team:
How to Build an Offensive Team | Best Hyper Offense Team

Mimikyu can also fill the role of either a lead or backup Trick Room setter. Since it has a respectable Speed stat, it doesn't completely rely on Trick Room and can function without it.

Mimikyu's main role for this team is to set up Trick Room for its two partners - Mudsdale and Vikavolt.

Both its partners are vulnerable outside of Trick Room, so learning when the effect ends is important so that you can quickly switch in Mimikyu to reset favorable conditions.

Defensive Mimikyu functions as a status spreader and annoyer with its unique status moves. These traits make it a great addition for Defensive teams.

Mimikyu takes a more supportive role in this defensive-oriented team, using Curse or force switches or threatening sweepers with Will-O-Wisp and Thunder Wave.

Metagross functions as an Assault Vest attacker, with its Steel-typing covering Mimikyu's Steel weakness. It also appreciates the burns and paralysis that Mimikyu provides.

Vaporeon, on the other hand, is the team's defensive pivot. It's main role is to heal its teammates with Wish and is especially useful if Mimikyu relies on Curse.

Check out our article below to learn more about building a Defensive team:
How to Build a Defensive Team 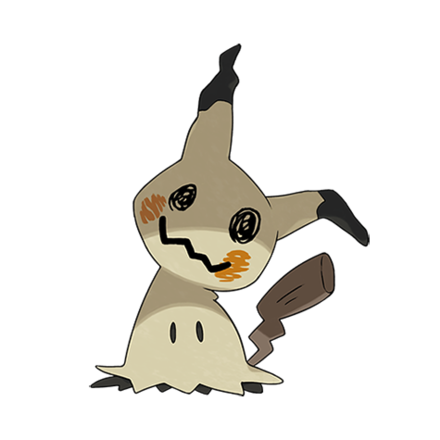 Bust its Disguise with Pivot and Multi-Hit Moves

Mimikyu's greatest strength is its free turn with Disguise. Once this is busted though, it loses some HP and becomes vulnerable to attack.

Using Pokemon with pivoting moves such as U-Turn and Volt Switch destroys Mimikyu's Disguise and lets you immediately switch into something that threatens it.

Alternatively, you can also use Pokemon with multi-hit moves to immediately destroy Disguise and damage Mimikyu in the same turn.

Use Pokemon that Can Bypass Disguise

Hit it With U-Turn or Volt Switch

Using U-Turn or Volt Switch against Mimikyu will allow you to take out its Disguise quickly and to switch into something that can hit its weaknesses.

In order for us to make the best articles possible, share your corrections, opinions, and thoughts about 「Mimikyu - Moveset & Best Build for Ranked Battle | Pokemon Sword and Shield」 with us!