This is a strategy guide for using Ludicolo in competitive play for the games Pokemon Sword and Shield. Read on for tips on the best Nature, EV spreads, Movesets, and Held Items, as well as Ludicolo's strengths and weaknesses in Ranked Battles.

This Special Attacking build for Ludicolo is designed to be a deadly sweeper or backup revenge killer. When used correctly, Ludicolo should have no issues dealing with 3-4 consecutive threats.

Hydro Pump is Ludicolo's main attacking option. Thanks to the Rain and STAB, Hydro Pump becomes even deadlier when used by Ludicolo. This is of course on top of its already high base attack.

Giga Drain is your secondary STAB-move, as well as your utility as it provides healing. This move is especially useful when you are stuck in a battle of attrition against stall teams.

Ice Beam is your coverage against popular Flying-type threats. Landorus-T and Dragonite are 4x weak to Ice Beam which allows you to deal with them before they start setting up.

Fake Out allows you to hinder your opponent's turn one play on top of dealing chip damage.

252 EVs on both Special Attack and Speed makes it so that Ludicolo hits hard and fast. Due to its lacklaster defenses, it's important that Ludicolo can easily deal with threats.

Swift Swim is one of the reasons this build works well. This ability gives Ludicolo immense speed and unlocks its potential as a sweeper.

Life Orb gives Ludicolo an extra boost in terms of fire power. This helps it deal with a handful of threats it normally can't stand up to.

This build capitalizes on the fact that Ludicolo has access to both Rain Dish and Leech Seed. Like a traditional Stall build, you want to make sure Ludicolo can set-up Leech Seed before playing it as safe as you can.

Substitute allows you to set-up Ludicolo's Leech Seed. More often than not, this is the first move you want Ludicolo using. Though you need to be wary of moves like Dual Wingbeat from a boosted Dragonite as it can bust through Substitute whilst dealing supereffective damage.

Leech Seed is your main stall option. This moves gives Ludicolo passive healing on top chipping away at your target's health.

Scald will be your only direct damage move. This provides you damage as well as utility as it has a chance to burn your foe.

Lastly, Protect is a valuable move as it prevents damage from non-Max moves. This also gives you an additional turn to heal up.

We will allocate the EVs to Ludicolo's defensive stats. This gives it the bulk it needs to survive otherwise lethal damage.

Rain Dish provides healing under the rain. This gives Ludicolo a third healing option on top of Leech Seed and Leftovers.

Leftovers works well with this Ludicolo build as it can help heal the damage taken from Substitute. This is of course on top of the healing Rain Dish and Leech Seed generates.

This Ludicolo build revolves around the versatility it offers especially under the rain. It's role in-battle depends on the situation presented as well as your opponent's team composition. This can either be a fast physical sweeper or a support Pokemon capable of providing offense.

Fake Out is a staple in Doubles as it provides utility and support. This move allows you to delay your opponent's opening tactic as it causes the target to flinch.

Icy Wind gives Ludicolo some form of speed control. Speed control is a must especially in a meta with numerous Pokemon that can potentially OHKO yours.

Muddy Water is one of Ludicolo's STAB move. This move is perfect in Doubles as it has a high base power, hits both opponents, and has 30% chance to lower your opponent's accuracy. Do note that Muddy Water, similar to other multi-target moves, has its base power lowered in Doubles.

Energy Ball is your other STAB move as well as your strongest one in terms of base power. This move boasts an incredible base 90 power and provides utility with its 10% chance to lower the target's Sp. Def.

252 EVs on both Special Attack and Speed makes it so that Ludicolo hits hard and fast. Due to its lacklaster defenses, it's important that Ludicolo can easily deal with threats.

Swift Swim is one of the reasons this build works well. This ability gives Ludicolo immense speed and unlocks its potential as a sweeper.

Life Orb gives Ludicolo an extra boost in terms of fire power. This helps it deal with a handful of threats it normally can't stand up to.

How to Use Ludicolo Effectively

Ludicolo is one of the most versatile Pokemon in the game as you can build it a handful of ways. However, at its core, Ludicolo is an offensive threat especially under the rain. Ludicolo's type combination gives you leeway as far as defense goes, but you should still pick your spots carefully as still has fragile defense stats. When piloted correctly, Ludicolo is capable of sweeping and revenge killing any team it matches up against.

How to Build a Team with Ludicolo

Due to its Abilities, Ludicolo has always found a home in Rain teams as a Special Attacking Sweeper, Revenge Killer, or even as a Support Pokemon. Ludicolo appreciates weather setters such as Kyogre or Politoed as it saves him the trouble of running Rain Dance. Additionally, its aforementioned defenses enjoy the boost provided by screen setters such as Grimmsnarl. Do note that the way a Rain team is constructed vastly differs depending on how you plan to build and use Ludicolo. 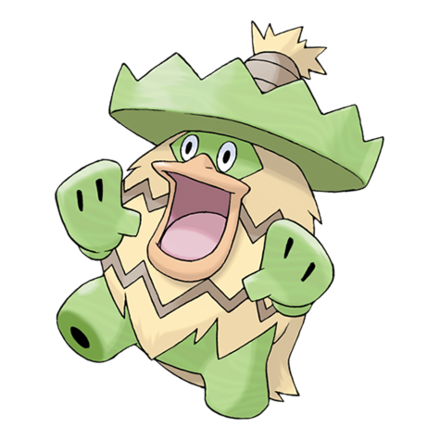 Wall Ludicolo with a Flying-type

Generally, Ludicolo deals little to no damage against certain Flying-types. Certain Dragonite builds for example can tank Ludicolo's Ice Beam and can potentially OHKO the Carefree Pokemon with Dual Wingbeat.

Post (0 Comments)
Opinions about an article or post go here.
Opinions about an article or post
We at Game8 thank you for your support.
In order for us to make the best articles possible, share your corrections, opinions, and thoughts about "Ludicolo- Moveset & Best Build for Ranked Battle" with us!
When reporting a problem, please be as specific as possible in providing details such as what conditions the problem occurred under and what kind of effects it had.